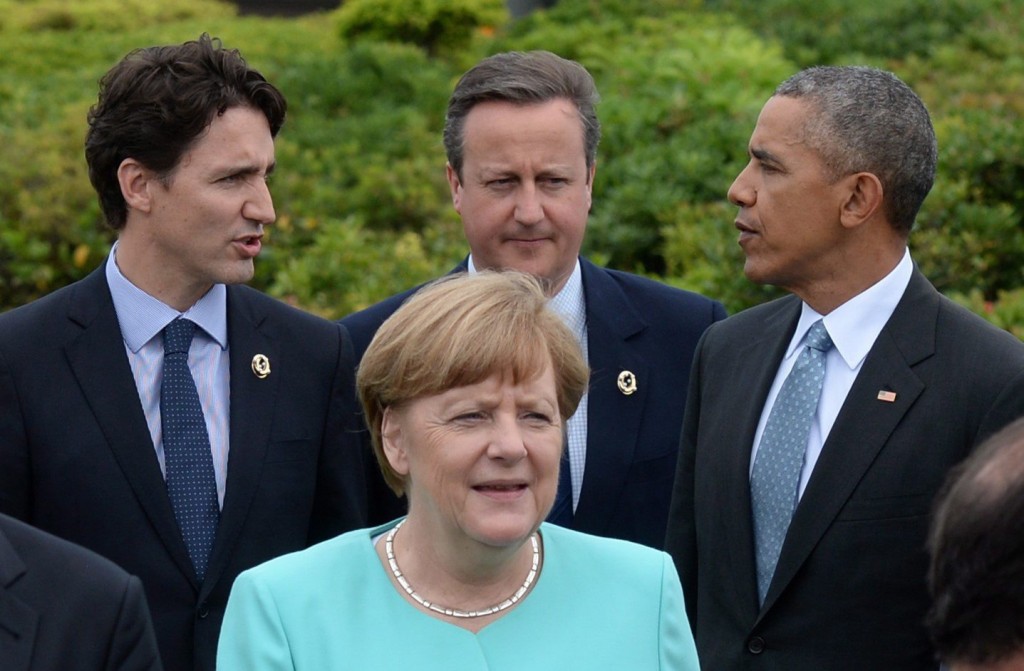 Canadian Prime Minister Justin Trudeau, left, talks with British Prime Minister David Cameron, middle back, and U.S. President Barack Obama as they walk behind German Chancellor Angela Merkel while on their way to an official family photo in Shima, Japan during the G7 Summit on Thursday, May 26, 2016. THE CANADIAN PRESS/Sean Kilpatrick

SHIMA, Japan — Justin Trudeau talked up trade and warned of creeping protectionism Thursday as he met powerful world leaders in a G7 setting for the first time.

On the opening day of the G7 summit in Japan, Trudeau also used his audience with the heads of some of the planet’s biggest economies to promote Canada’s free-trade deal with Europe.

He focused on the Canada-European Union treaty, known as CETA, in a bilateral chat with German Chancellor Angela Merkel.

And, in a working session with all the leaders, Trudeau once more touted the merits of international trade.

“When the middle class are anxious about their economic realities in their future, it’s easy to get trapped in demagoguery and protectionism,” Trudeau told his peers at the remote Shima resort, which was shielded by barbwire-topped fences, checkpoints and waves of security officers scattered along a huge perimeter.

“We know trade-intensive industries pay 50 per cent higher wages, so we need to make a case for trade — it’s not just about nice political speeches.”

Lawrence Herman, a Toronto-based trade lawyer with Herman and Associates, said Trudeau was targeting his remarks at the “darkening clouds on the trade horizon, notably in the U.S.” where the presidental candidates from both parties have come down hard against trade deals.

“So Trudeau wisely wants the G7 to strongly endorse a free-trade agenda, which hopefully will help spur CETA ratification in Europe and pressure the U.S. Congress to approve (the Trans-Pacific Partnership), both of which are languishing.”

The G7 leaders largely focused their discussions on the global economy as the summit got underway.

The host, Japanese Prime Minister Shinzo Abe, called upon his counterparts to act to steer the world away from another global economic crisis.

“We’ve all got a lot of work to do and we agreed to continue to focus on making sure that each country, based on its particular needs and capacities, is taking steps to accelerate growth,” Obama said.

Trudeau took a harder line and promoted his government’s plan to run deficits in order to invest in the economy as a way to boost growth.

“It’s not a question of whether to make investments, but what we are making investments in,” Trudeau told the session.

Trudeau’s personal G7 representative, who negotiates the wording of the leaders’ joint statement, said this year’s meeting is the prime minister’s first chance to tell his peers directly about Canada’s deficit-fuelled approach to lifting its economy.

But Peter Boehm said each G7 country has its own system and its own unique set of circumstances to navigate.

“The tools are not necessarily common to all, nor would the approaches be, but it’s an opportunity to do a little bit of show and tell,” he said.

G7 meetings, Boehm added, differ from other forums in the sense that leaders can have frank discussions with each another.

Those discussions included a lot of talk about CETA, which Boehm noted was Trudeau’s main focus heading into his meeting with Merkel.

Canada and the EU have signed CETA and, once ratified, the pact could come into force as early as next year.

International Trade Minister Chrystia Freeland has hailed it as a “gold-plated trade deal.” Ratification will give Canada access to a 28-country market of 500 million people.

“We’re also very aware of the rising protectionist tide in many countries and we believe that it’s important to push against that tide,” Freeland told reporters at the Canadian embassy.

“And we also believe that one of the essential ways to do that is to be sure that the public, in our case Canadians, really feel engaged in the trade debate.”

The Trudeau government is also highlighting trade on the world stage as Britons prepare to vote in a June 23 referendum to decide whether they should leave the EU. A vote in favour of the so-called Brexit would have an impact on CETA.

Trudeau, Merkel and Obama have spoken out against Britain leaving the EU.

“Germany and France are key to getting (CETA) ratified in Europe, so (Trudeau’s) emphasis is smart,” John Kirton, director of the G8 Research Group at University of Toronto, wrote in an email Thursday.

“It would show the EU liberalizing to offset the Brexit fears.”

Leaders at the G7 summit also discussed several other topics Thursday, including the migrant crisis.

Merkel said she didn’t expect the final communique to include solid offers from other G7 members to accept refugees.

However, she mentioned she told Trudeau during their bilateral meeting how much she appreciated the large number of refugees Canada has taken in.

“One has to consider that Canada isn’t right next to Syria and yet it still feels responsible for the problems there,” the German chancellor said.

Germany opened its doors to about 1.1 million migrants last year, which raised concerns countrywide about how it would cope with the influx.

On Friday, G7 leaders are scheduled to discuss issues such as climate, energy, prosperity in Asia, the empowerment of women, health and Africa.