Paul Wells on small differences in a tight race 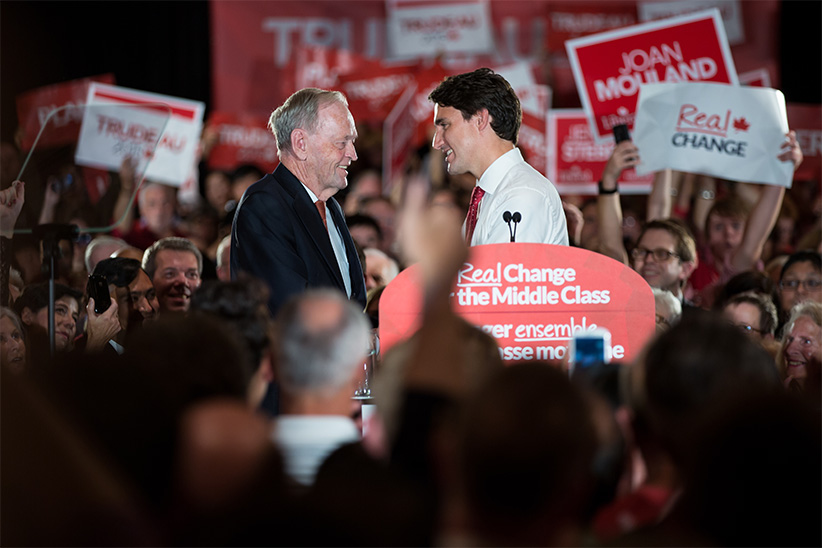 This may be my favourite joke. A bear comes crashing out of the woods and starts chasing two hikers. They’re running for their lives, but suddenly one stops, plunks himself down on the dirt, and starts lacing up a pair of running shoes. The other guy says, “Are you crazy? You can’t outrun a bear!”

The bear, for our purposes, is Stephen Harper. He is running a different race from the one Justin Trudeau and Tom Mulcair are running. Most of his voters aren’t interested in voting for their parties. Most of their supporters don’t like his. If he keeps enough of the 39 per cent who voted for his Conservatives in 2011, he’ll be back to form another government after Oct. 19.

But this campaign has already been going on for longer than the 2011 campaign did and, so far, there’s no evidence Harper can match the level of support he won then. There’s a persistent desire for change. Trudeau and Mulcair are running as the change agents, but neither has been able to break from the pack. All the polls and seat projections suggest they’re running nearly even with each other. Which means they’re running even with the Harper Conservatives.

Unlike Harper, Trudeau and Mulcair are running similar races. Their hopes are highest in urban areas, each rises at the other’s expense or falls to the other’s profit, and supporters of each left-of-centre party list the other as their second choice. Each spent the campaign’s first month hoping to raid the Conservative vote, with just enough success to encourage false hopes of more. But the main goal of the Conservative campaign now is to make sure long-time Conservative voters don’t stray by reminding them of his positions on issues such as Syrian refugees, supervised drug-injection sites and what he always calls “the wasteful and ineffective long-gun registry.” The other parties can’t follow him onto that ground. I doubt they can compress the Conservative vote much further.

So Trudeau needs to outrun Mulcair, and vice versa. The back half of this campaign will be about the narcissism of small differences, as the two leaders whose electorates have the most in common realize they are each other’s biggest obstacle to forming a government.

Now, if you wanted me to, I could write about the Liberal and NDP position on Quebec secession from now till Tuesday. I came up at the Montreal Gazette when no story was more important to that paper’s readers. I’ve written about this dispute hundreds of times. But it’s not super-helpful to write about it anymore, because nobody’s interested in the fine print. Liberals and New Democrats use it as a totem to remind themselves of their side’s superior virtue. And, as with arguments over hockey teams or Oscar hosts, it is pointless to inject logic.

I’m not saying anyone’s being cynical. Both sides care passionately about the relatively arcane question of the appropriate margin of victory in a secession referendum that will certainly not happen during the life of Canada’s next federal government. They care. They just don’t want to think. The most important thing about Chrétien’s appearance with Trudeau was that it happened in Hamilton instead of small-town Quebec. In Hamilton, it’s fairly easy to get people angry at Mulcair for wanting to replace the Clarity Act. In Trois-Rivières, it would be easier to get people mad at Trudeau for wanting to keep it. That’s all this is about.

And the reason Trudeau has a strategic interest in getting people arguing about Mulcair’s position on secession is that there’s not much else they can argue about. Both want a more active government. Both believe Canadians will pay more taxes, or, at least, will be pleased if somebody else pays more taxes, to afford a more ambitious government. Both are tired of foreign wars and fond of government scientists. Where there are differences—a rounding error’s worth of disagreement over deficits or surpluses—both men are transfixed, enraged, as though a Prime Minister Mulcair would waste more than 10 minutes next spring if he ran a deficit, or a Prime Minister Trudeau would resign over a surprise surplus.

There is more instinct than calculation in this. Each man needs to outrun the other. Each blocks the other’s path to victory. After Oct. 19, one may well need the support of the other to sustain a government. But for now, those choices are so far away, they seem incomprehensible. And it matters enormously to each of them which of the two gets there with more MPs.

This has never happened before in this country, three parties this close together for this long. Election day may not settle much, but the tension caused by its fast approach will ratchet up the heat under every leader. What fun.