Justin Trudeau issued a statement on Fidel Castro, and everyone hated it 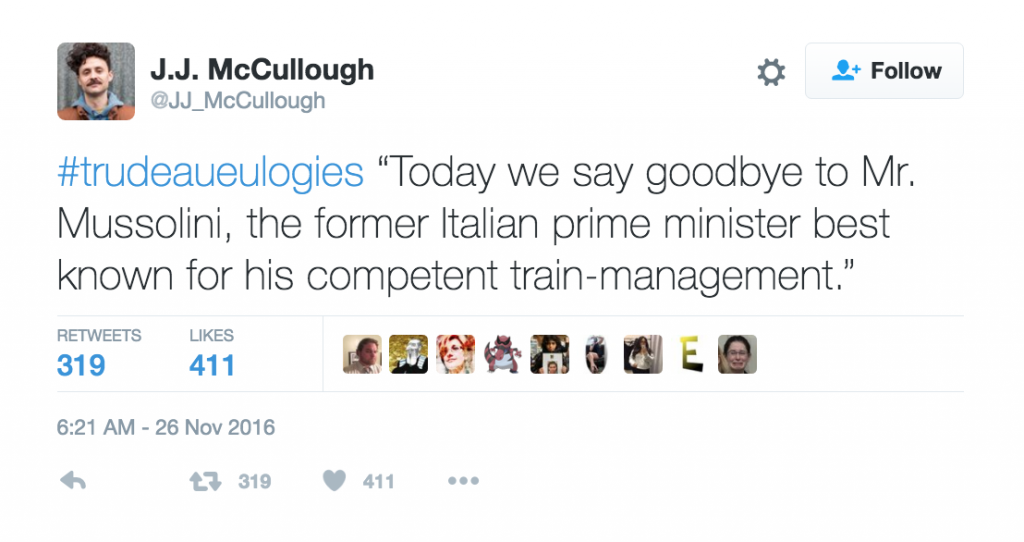 In the statement, Trudeau said that “it is with deep sorrow that I learned today of the death of Cuba’s longest serving President.”

Trudeau went on to say that, while Castro was “a controversial figure, both Mr. Castro’s supporters and detractors recognized his tremendous dedication and love for the Cuban people who had a deep and lasting affection for ‘el Comandante’.”

The statement also noted Castro was “a legendary revolutionary and orator,” and “a larger than life leader who served his people for almost half a century.”

It was roundly condemned, including by former Republican presidential hopeful Marco Rubio, a Cuban American.

One pundit, J.J. McCullough, a conservative commentator and cartoonist, started the hashtag #Trudeaueulogies as a way to parody Trudeau’s statement.

"While a controversial figure, John WIlkes Boothe will be remembered as a lover of the theatre" #trudeaueulogies

Kim Jong il will always be remembered fondly for his leadership and contributions on climate change. #trudeaueulogies pic.twitter.com/aMoAC2vssm

"Though a controversial figure, Dr. Henry Jekyll will largely be remembered for his tireless dedication to science." #trudeaueulogies

"While a controversial figure, Augusto Pinochet's unequivocal support for the helicopter industry did much to create jobs" #TrudeauEulogies

HANNIBAL LECTER WAS A LARGER-THAN-LIFE FIGURE, A LOVER OF THE CULINARY ARTS. HE CONNECTED WITH PEOPLE ON A PERSONAL LEVEL. #TrudeauEulogies

#trudeaueulogies We lament passing of General Franco, who increased Luftwaffe safety by asking Hitler to test new bombers on his citizens.