Trudeaumania through the eyes of photographer Peter Bregg 50 years later

Bregg, who captured so many of the most memorable photographs of Pierre Trudeau, was on hand when Trudeaumania began on April 6, 1968

In June 1968, on a week-long trip in the Arctic, the recently-installed Prime Minister of Canada taught a young Canadian Press photographer a valuable life skill.

It was a small travelling party—the prime minister, his brother, a Mountie, and three members of the press. So the group ate together, and that’s when Pierre Elliot Trudeau showed Peter Bregg how to use chopsticks.

Fittingly for the photographer who captured so many of the most memorable images of Trudeaumania, Bregg was on hand when it began 50 years ago.

It was Trudeau by a nose in the fourth at the Liberal leadership convention at Ottawa, Saturday. Justice Minister Pierre Elliott Trudeau, 46, got 1203 votes–a few more than the required majority–on the fourth ballot. (Peter Bregg/CP)

The first weekend of April 1968, the then 19-year-old photographer in CP’s Ottawa bureau was assigned to cover the Liberal leadership convention, called to replace prime minister Lester Pearson. “I wasn’t even old enough to vote yet,” recalls Bregg—at the time, you had to be 21. (It was also two days after Martin Luther King Jr. was assassinated).

SEE MORE: In photos: How Justin takes inspiration from his father

Trudeau was the front-runner, but Bregg was assigned to cover three of the “secondary guys.” Standing on a platform up the steps from the still-new rink floor of the Ottawa Civic Centre, he watched as Trudeau ultimately prevailed in four rounds of balloting.

Trudeau “was toying with the photographers, hamming it up” to pass the time, says Bregg, pointing out that another CP photographer got a shot of him puckering up to a carnation. “That’s the way he was.” Once his victory was announced, he and his supporters had to push their way to the stage, a moment Bregg captured.

Bregg photographed 11 of Canada’s 23 prime ministers—12, if you count Louis St. Laurent, whose funeral he covered. The ones before Trudeau the father, and between him and his son, were “older guys in their skin,” he observes. Brian Mulroney was less overtly physical, but “always laughing, smiling, backslapping,” and Bregg speaks of him with clear affection. (He photographed the weddings of two of the prime minister’s sons). Jean Chrétien was athletic enough to hop on a bicycle in China, but more private.

Bregg was usually the CP photographer assigned to cover Trudeau, and often one of a very few from any outlet who covered his trips in Canada and abroad. But over the years, the number of people pointing cameras at prime ministers increased, as did the ranks of accompanying staffers. “Handlers get in the way, because they’re all afraid that you’re going to get that photograph where [the leader] looks silly,” says Bregg. Perhaps for good reason—Bregg points to the case of Gilles Duceppe and the hairnet. A 1997 photo of the Bloq Quebecois leader, who in fairness probably never wanted to be Canada’s prime minister, wearing the thing at a cheese factory became the defining image of him in Anglophone Canada. “He looked goofy,” observes Bregg. “And you know what? Pierre Trudeau would have looked real cool.”

FROM 1969: Pierre Trudeau: ‘My first year as Prime Minister’

With all three of today’s major party leaders under a half century, it can be hard to remember that Pierre Trudeau was seen as a notably young man when he was first becoming known on the federal stage. Bregg recalls an editorial cartoon the day after Trudeau, Turner and Chretien had been inducted into cabinet, depicting them as babies in carriage being pushed by Pearson.

And Trudeau’s actions and words played up that youthful conceit. Bregg cites his famous line as justice minister about the state and the nation’s bedrooms. “When a guy talks like that, you know that twenty-somethings are going to notice,” he says. Then there was the fact that he was single, drove a sports car and wore a flower in his lapel.

It helped that he often got to run against a study in contrast. In the 1968 federal election, Trudeau’s first as prime minister, the Tory leader was Bob Stanfield, who Bregg describes as beloved. “But this guy”—Trudeau—“does backflips in the swimming pool, and this guy”—Stanfield—“looks like everybody’s grandfather.”

Bregg captured the prime minister doing one-handed pushups, riding camels and elephants, playing frisbee, doing handstands, pulling funny faces, and much else besides. These images undoubtedly helped fuel Trudeamania. But unlikely as it seems in the era of the stage-managed photo-op, Bregg says the images just reflect who Trudeau was. “I never felt that I was being controlled, ‘Let’s do this so Bregg will get a great shot,” the photographer says. Trudeau “never planned anything, it just would happen, spontaneous.”

A politician indulging in similar behaviour today would risk being labelled unserious. But Bregg reminds you that it was the swinging sixties, and that above all Trudeau’s actions were authentic.

Of course, the very personality that endeared him to so many also alienated others, as did his policy. The National Energy Program remains the subject of rancour in Alberta, decades after its end. Writing only a week after his death in 2000, a certain Stephen Harper expressed the hope that “Canadians will come to view Mr. Trudeau more soberly than when it mattered.”

FROM 1968: When the world fell for Pierre Trudeau

Bregg acknowledges that he looks back at the prime minister with “rose coloured glasses.” (That’s not unique to Trudeau—“I’ve always been a fan of the prime minister in office,” he says). But he says he “never sensed” a whole lot of opposition to Trudeau when he covered him. He does note that the prime minister was a different man in his later years, when Bregg trained his lens on him once again after returning from a stint in the U.S. “I wasn’t getting those pictures that we used to in the early days of his time in office,” he says, noting that it looked like the job was not as much fun for Trudeau as it had been.

But back in April 1968, all that was long in the future for both Trudeau and Bregg. The photographer took some other pictures that day that documented history in the making, even if he didn’t know it at the time. One of his subjects was Paul Martin Sr., then in his third run for the leadership. He would ultimately fall on the first ballot, but Bregg captured him alongside a different future Liberal leader and prime minister: his son.

Also pictured that day: third-placed finisher Paul Hellyer in conversation with cabinet minister Judy LeMarsh. “There was a microphone above their heads, and someone kept trying to swat [it] away,” Bregg recalls. What it caught was LeMarsh telling Hellyer, “Don’t let that bastard win it.”

He did anyway, and Trudeaumania had begun. 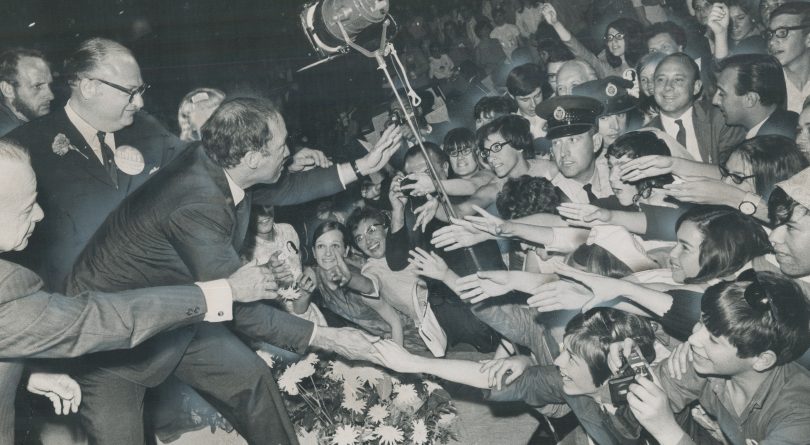 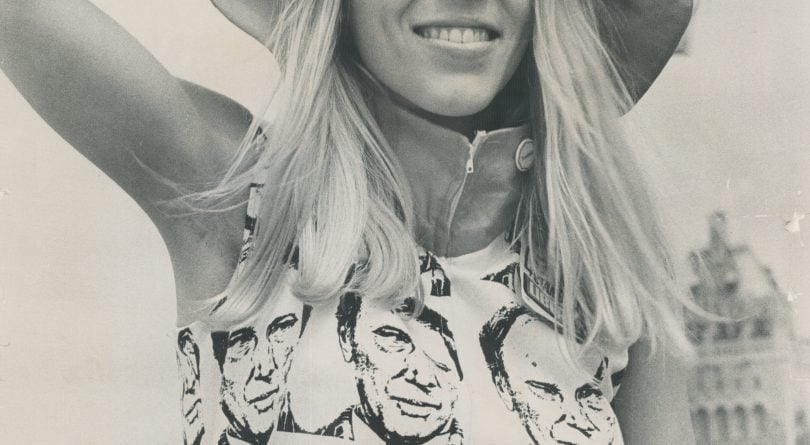 A stylish welcome for Trudeau. Going all out to welcome Prime Minister Pierre Trudeau to Toronto today; Michelle Hollingworth; 19; wore a dress printed with scores of pictures of him; and–in case there was still doubt–a Pierre button adorned her stetson hat. (Doug Griffin/Toronto Star/Getty Images) 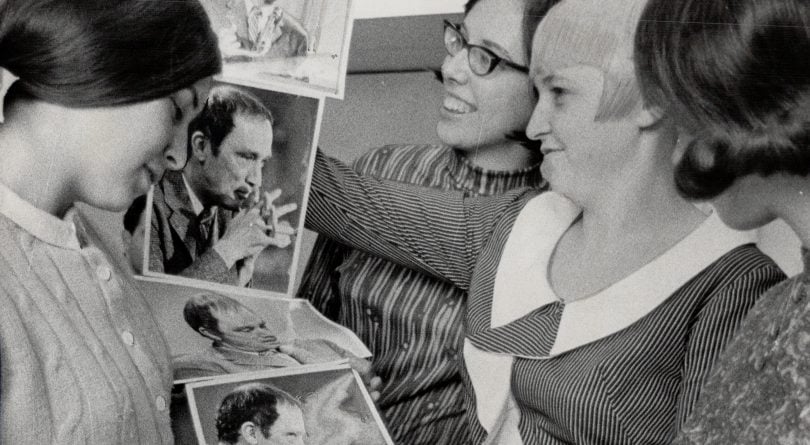 Trudeau fans Barbara Hook; 22 (left); Pat Erickson; 22 (centre); and Patty Carroll; 22; will cast votes for the first time June 25 and the Liberals will get them because of the PM. (Boris Spremo/Toronto Star/Getty Images) 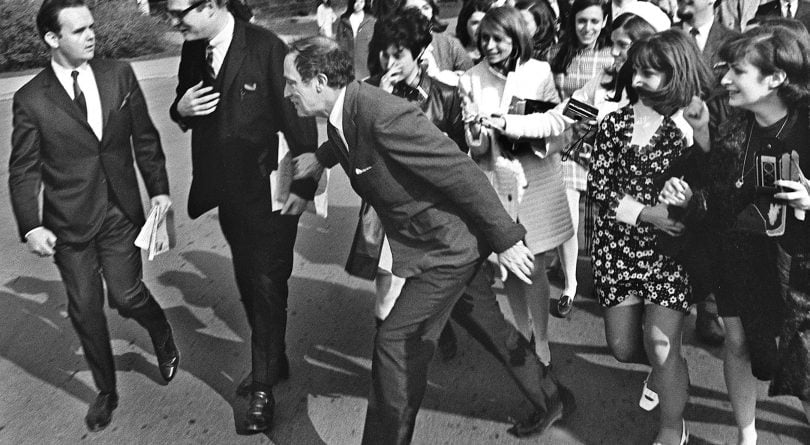 Prime Minister Pierre Trudeau sprints away from a crowd of female admirers in Ottawa April 22, 1968. They surrounded him outside the Parliamount Buildings on his third day in office. (Peter Bregg/CP) 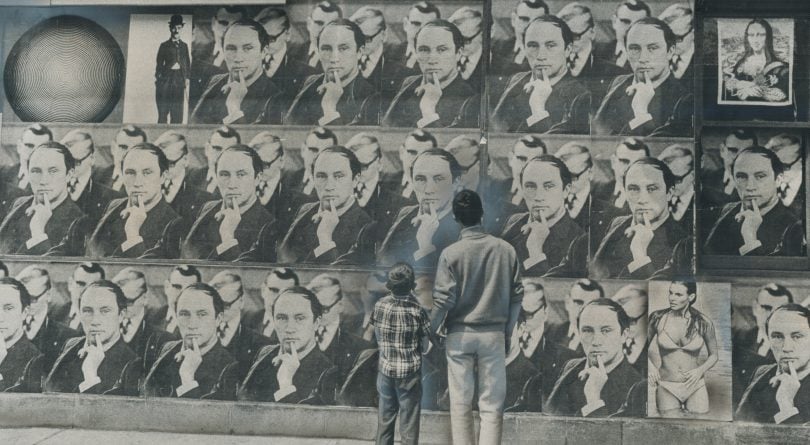 Apprently afflicted with acute Trudeaumania; owner of this record; poster and variety shop on Granby Street has plastered posters of the Prime Minister solidly across the shop front-and captured the trancelike attention of passerby Kevin Scanlon; 18; and Patrick; 9. Only break in the telescoping tedium of Trudeau faces is a cigarette-smoking Hippy Mona Lisa (top right); and the very curvaceously hippy actress Rqueal Welch in bikini; but neither rates a glance. (Reg Innell/Toronto Star/Getty Images) 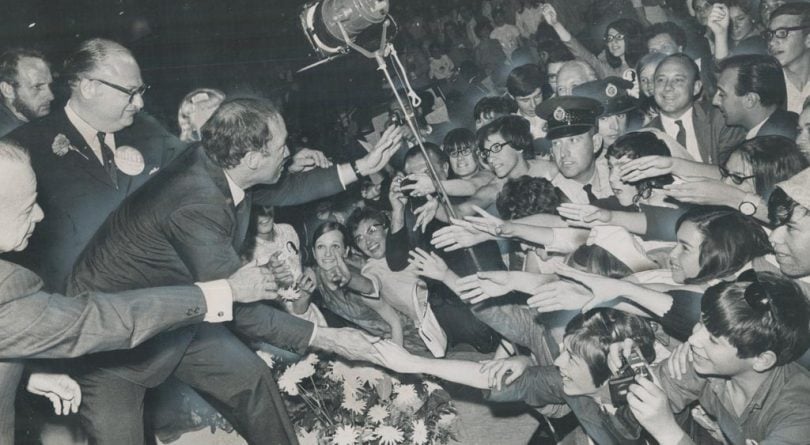 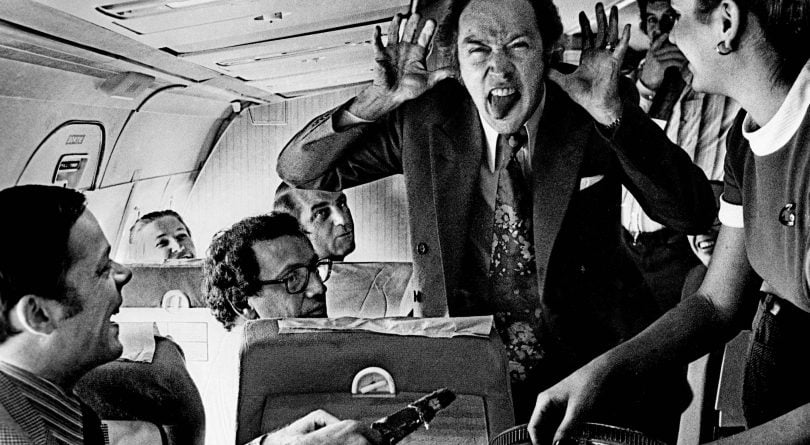 Prime MInister Pierre Trudeau sticks his tongue out to Canadian Press Photographer Peter Bregg during the 1972 election campaign. This photo was taken aboard the campaign plane where such antics were considered off the record. The photo was not made available until after the death of the prime minister. (Peter Bregg/CP) 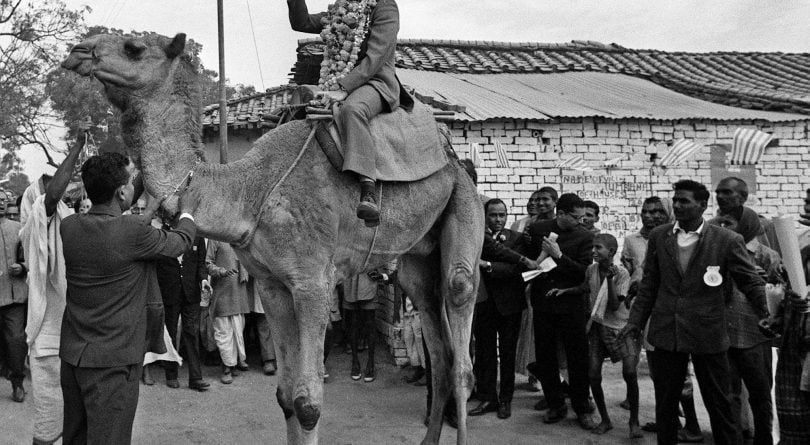 Canadian Prime Minister Pierre Trudeau, with a garland around his neck and a Hindu greeting symbol in paste on his forhead, rides a camel Jan. 12, 1971, in the village Benares, India, where he dedicated a well. (Peter Bregg/CP) 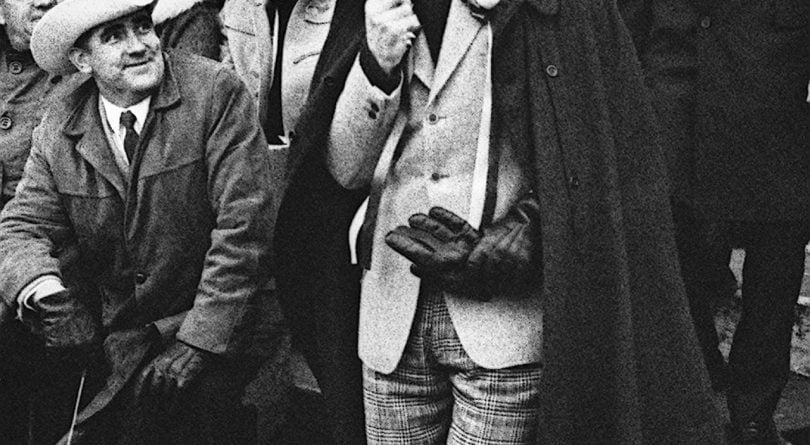 Prime Minister Pierre Trudeau, wearing what someone called his “Mandrake the Magician oufit,” a cloak and hat – walks down the grandstand steps to present the Grey Cup trophy to the victorious Montreal Alouettes in this Nov.28, 1970 photo. (Peter Bregg/CP) 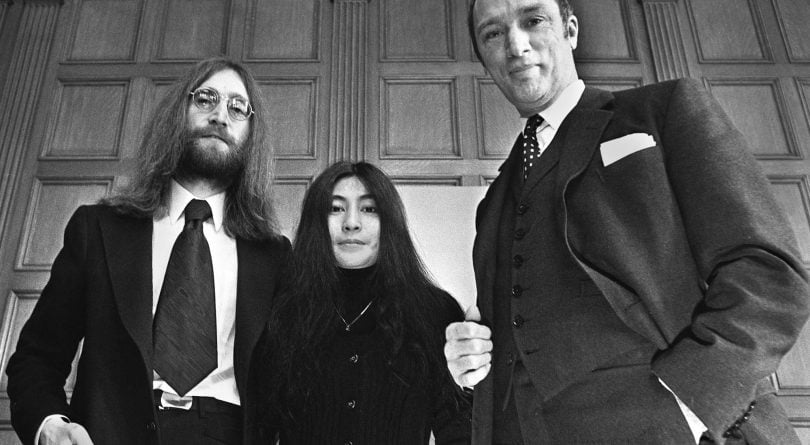 John Lennon and Yoko Ono are in Canada to conduct a crusade for peace, meet with Prime Minister Pierre Trudeau Dec.24, 1969 in Ottawa. (Peter Bregg/CP)

It was Trudeau by a nose in the fourth at the Liberal leadership convention at Ottawa, Saturday. Justice Minister Pierre Elliott Trudeau, 46, got 1203 votes–a few more than the required majority–on the fourth ballot. (Peter Bregg/CP)