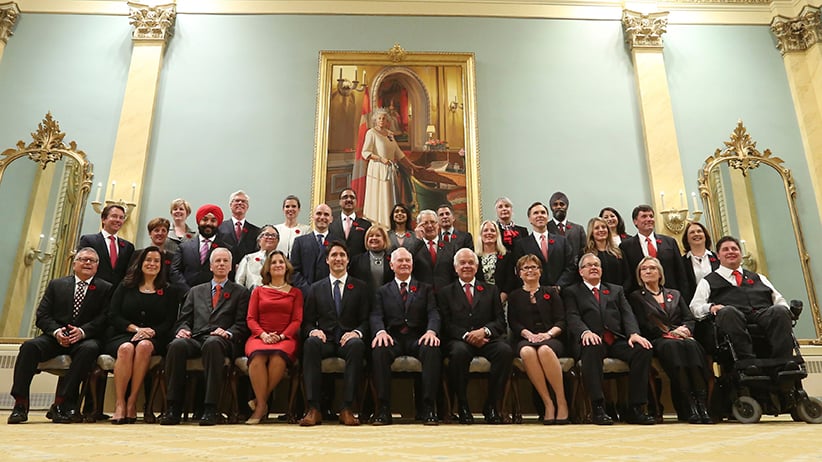 So much of the advance fuss over Justin Trudeau’s first cabinet had to do with questions of identity—How many ministers would be women? How many from Quebec? How many from B.C.?—that it’s easy, now we have names, to overlook the new government’s functional aspects.

As this cabinet came up the Rideau Hall driveway on foot, it looked pretty in its first official photo, but it is also full of people with pertinent experience in their assigned tasks. A finance minister who has created jobs. A foreign minister with a passport. A defence minister who has personally organized the large-scale delivery of lethal violence. A science minister who’s a scientist. A cum laude M.D. at Health. A transport minister who has been to lower-Earth orbit. A government House leader who has been making trouble in the Centre Block since before he could walk. This government is built for blowing, not just for showing. The new Prime Minister said he wants to meet the House in a month. This government, full of rookie MPs in key portfolios, will face two dozen parallel trials by fire. Somebody had that in mind while he or she was designing the thing.

In many spots there is an intriguing—indeed, risky, but it’s a risk this new government has no choice but to take—mix of real-world experience and parliamentary inexperience. Take some of the most important ministries. Bill Morneau at Finance, Harjit Sajjan at Defence, Jody Wilson-Raybould at Justice and Jane Philpott at Health are rookie MPs. Each has long experience in relevant fields, but all will be grateful to be surrounded by veterans at other posts.

Dominic LeBlanc knows Parliament’s arcane crannies better than most. He used to play in the hallways with Justin Trudeau when their fathers were colleagues in Pierre Trudeau’s government. He worked in Jean Chrétien’s PMO. He’ll come in handy when sunny ways aren’t enough. Scott Brison, a former deficit-hawk Progressive Conservative at Treasury Board, will lead a cabinet committee on penny-pinching with John McCallum as co-chair. Both will seek to ensure the government isn’t profligate or silly as it begins to spend more than the Harper government did.

Then there is Stéphane Dion at Foreign Affairs. A former leader can present a delicate challenge to a new prime minister: deserving of respect, but a bit of a drag as a leader tries to go in new directions. Many before Trudeau have come up with the solution of making the former leader a globetrotter-in-chief: Dion follows in the footsteps of such ex-leaders as Joe Clark, Peter MacKay, John Kerry, William Hague, Laurent Fabius. He is an inspired choice for foreign minister, and there were a lot of jobs he could have had that would have been problematic in one way or another.

Related: The making of a Prime Minister

The government has no minister for official languages: One presumes it’s subsumed among Heritage Minister Mélanie Joly‘s responsibilities. It has no intergovernmental-affairs minister: Trudeau will take care of federalism himself. (So, in a very different way, did Stephen Harper, come to think of it, whatever his various intergovernmental ministers might have thought.) It has no industry minister: Navdeep Bains, a key Liberal organizer in the Toronto suburbs, becomes the “minister of innovation, science and economic development.” Here’s some free advice for him. One of his first acts should be to reveal the biennial report of the government’s own Science, Technology and Innovation Council (STIC), which was supposed to become public in May before the Harper government hoisted it. The STIC council’s report will describe a mess in Canadian science, R&D and industrial innovation. Then Bains should give the very same council a mandate and a short deadline to suggest solutions.

Book-learning is no guarantee of success. About twice a year, I spare a mournful thought for Michel Dupuy, a star Liberal candidate in 1993. A career diplomat, novelist and poet, Dupuy was Chrétien’s first minister of Canadian heritage. He made an inappropriate phone call, was not quick-witted in his question period defences, and was slowly, inexorably, hounded out of his job by the opposition parties. The same, more or less, will certainly happen to one or more of the sun-kissed ministers who swore an oath of office this morning. Enoch Powell once said all political careers end in failure. But before they end, much is possible, and it was the feeling of possibility at Rideau Hall this morning that I’ll remember.