Trudeau's ISIS policy gets an assist from Obama—and Harper 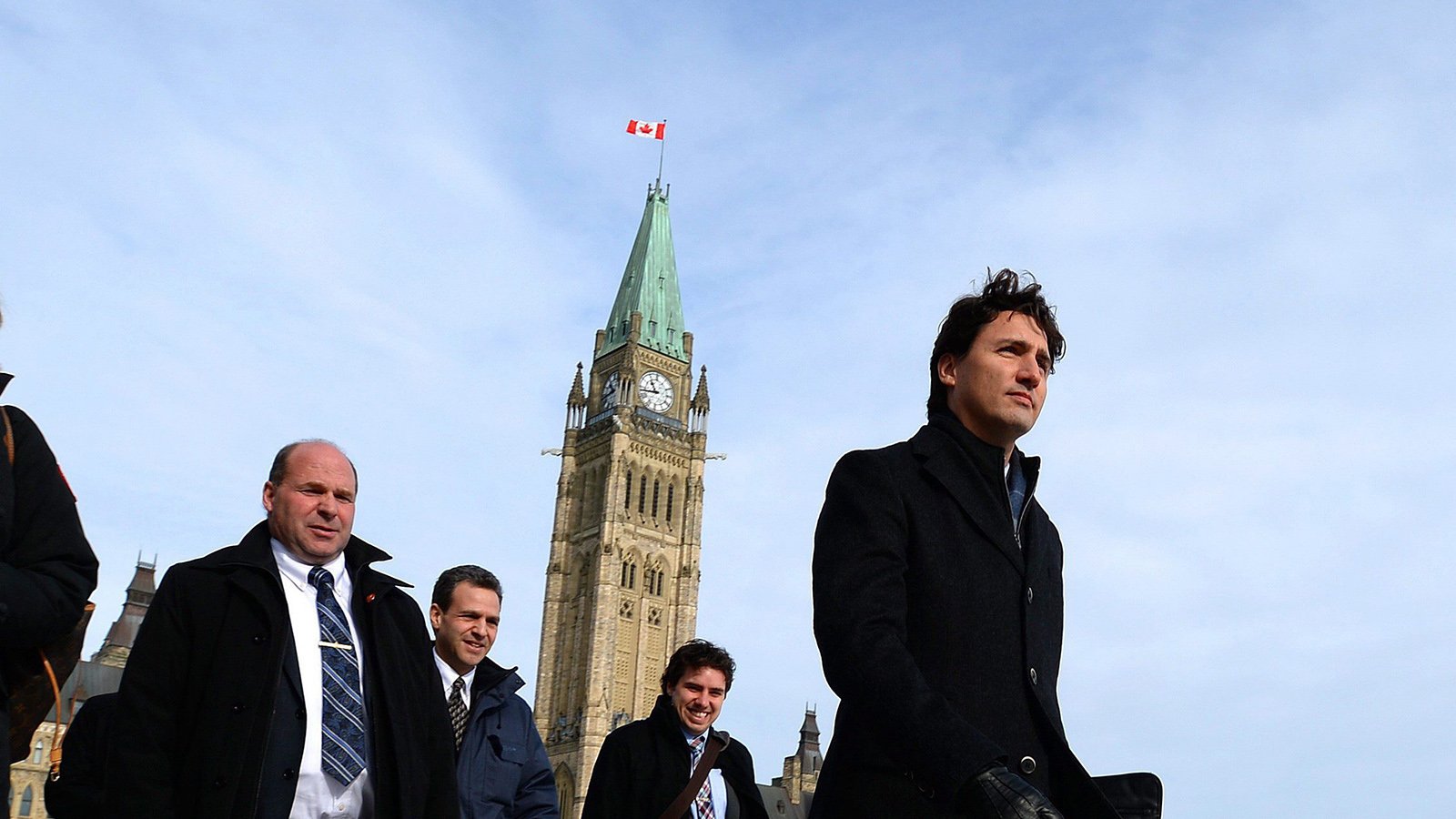 Prime Minister Justin Trudeau makes his way to a press conference at the National Press Theatre in Ottawa on Monday, Feb. 8, 2016. THE CANADIAN PRESS/Sean Kilpatrick

To say Justin Trudeau dodged a bullet when the Obama administration said nice things about his new ISIS/Syria/Iraq policy is to understate things.

The Prime Minister didn’t just escape harm inflicted by a jilted ally (though he still must remain nervous about domestic Canadian political reaction, which naturally will parse these things differently from the way any foreign power does). He received a positive boost from a choreographed succession of American political figures. It was objectively harder for the Conservative Opposition to criticize Trudeau at the end of the day than it had been at the beginning.

First up was Peter Cook, the Pentagon spokesman and stand-in for Defence Secretary Ashton Carter, who has been portrayed as the bad cop to Secretary of State John Kerry’s Trudeau-hugging good-cop softie on the Canada file. What’s significant is that Cook didn’t just shrug and accept Trudeau’s training-and-relief-but-no-fighters stance, he flagged it as a model for other U.S. allies to emulate. “The Canadian announcement is the kind of response the secretary’s been looking for from coalition members,” Cook said at the daily Pentagon briefing, “as the United States and coalition partners push to accelerate the campaign against ISIL.”

After that, remarks from U.S. ambassador Bruce Heyman (“I was pleased“) and, in a paraphrased readout of a phone conversation with Trudeau, from Obama himself (“The President welcomed Canada’s current and new contributions“) were gravy.

How are such things possible?

One possible interpretation, which I suspect you will find represented in the comment section below this post soon enough, is that the Obama crowd are so thoroughly unable to find their own hindquarters with a map and a flashlight that they don’t even know when they have been hung out to dry by quislings. But I’ve since been struck by another possibility: that the Harper government’s contribution to the fight against the Islamic State was so slight it is hard to find anyone who’ll mourn its passing.

This interpretation is seriously off-brand for the Conservatives, and I don’t imagine it’ll find many takers, but I’m stuck with the facts. Canada’s six fighters performed fewer than three per cent of all coalition strikes against so-called Islamic State targets. Last September they struck 10 times. In a month.

Compare that with the effort the notorious Ritz Bar dilettante Brian Mulroney mustered a generation earlier when Saddam Hussein had invaded Kuwait: 24 CF-18 fighters and a force of nearly 2,000 soldiers, stationed in the Gulf theatre on two destroyers and a supply ship, in a naval HQ in Bahrain and an impromptu airbase in Qatar.

That’s pretty robust. It was such serious business that the Liberal caucus of then-rookie leader Jean Chrétien was seriously divided over whether it should stay when fighting broke out. Chrétien reversed himself entirely, first calling for the deployment to be cancelled, then voting — with most but not all of his caucus — to let it stay and fight. There was certainly no room for Chrétien to do the kind of this-but-not-that hairsplitting Trudeau indulged on Monday by tripling training while recalling jet fighters, because Mulroney’s was an all-hands-on-deck effort that could not be realistically exceeded in any of its particulars.

And Iraq ’91 in no way represented the existential peril to Canada that Stephen Harper believed Islamic terrorism might pose today. In an interview with Maclean’s soon after the 2011 election — one I have quoted many times because I believe it offers important insight into Harper’s thinking — he compared the fight against terrorism to the 20th-century fights against Hitler and Stalin, “those big conflicts where everything’s at stake and where you take a side and show you can contribute to the right side.”

So one question that could have been asked to Harper at the time was: If everything’s at stake, what the hell are you doing sending only six fighters?

The result is before us today. “Your CF-18s, we don’t need them,” a diplomat from a European country with serious skin in the anti-ISIS game told several reporters at a private lunch recently. “We don’t need them.” The Harper training effort was so rudimentary it is possible for Trudeau to triple it. The troop commitment was so modest it is possible to exceed it. The bar was set so low it is possible for Ash Carter, the toughest guy on the Obama block, to announce Trudeau has raised it.

This is becoming a problem for the Harper legacy. For, say, half a decade after 2010, Conservatives kept asking one another, nervously, precisely when Harper Conservatism would start to serve up the occasional head rush, as Thatcher and Reagan and Mike Harris Conservatism had sometimes done. The answer, from Harper and his staff and the occasional author, was that Harper was going about it another way: cautiously, incrementally, a wee bit at a time, the longer he was prime minister.

What has been striking, with gusts to breathtaking, is how easily this young Liberal Prime Minister has begun dismantling even those elements of a Harper legacy that are easy to discern: the criminal-justice stuff, the long-form census, the commitment to minimal government, which could only work if Harper succeeded in bullying his successor into maintaining balanced budgets. Now the fight against terrorism. A Trudeau retreat would have been plainer for all to see, if only there had been much from which to retreat.