The PM has put smart people into big and difficult roles. The challenge—for him and his legacy—will be whether he can give them space to do their jobs. 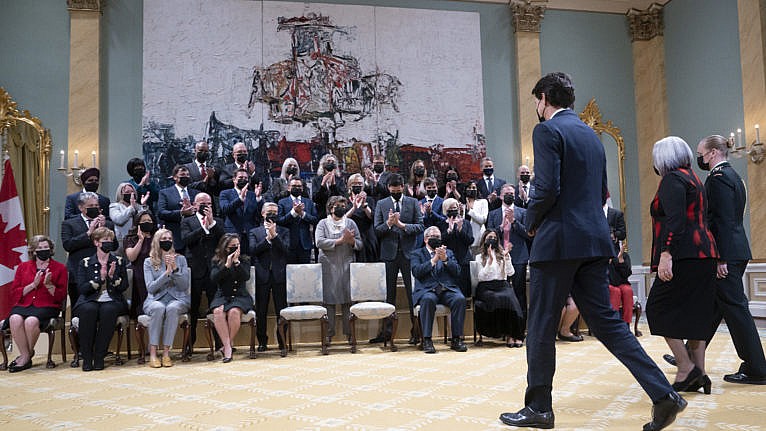 Members of cabinet applaud as Trudeau and Gov. Gen. Mary Simon approach for a photo following a swearing in ceremony at Rideau Hall on Oct. 26, 2021 in Ottawa (Adrian Wyld/CP)

A CBC producer, soggy as a sponge like everyone else in the media gaggle, took it upon himself to be the warm-up act.

“GOOD MORNING PRIME MINISTER IS THIS SUNNY WAYS?” he bellowed at Justin Trudeau in a goofily exaggerated yell as the PM strode up the driveway of Rideau Hall alongside his wife, Sophie Gregoire Trudeau, both of them sheltered by a large umbrella.

“GOOD MORNING CHRIS HOW ARE YOU DOING TODAY?” Trudeau hollered, returning serve on the joke.

The producer’s line was doing double duty, of course, referring to election night 2015, when a jubilant Trudeau invoked Wilfrid Laurier in declaring that “sunny ways” had won the day, and to the sun-drenched walk that Trudeau and his first cabinet had taken along this very same driveway soon after.

That absurdly photogenic walk was feel-good political stagecraft at its finest, but now it registers like a decades-old high school yearbook: good god, we were so young and innocent.

The front row in those photos is now a gallery of this government’s fallen: Catherine McKenna (did not stand for re-election), Bill Morneau (resigned amid the WE Charity controversy), Jane Philpott (resigned over the treatment of her friend, Jody Wilson-Raybould, during the SNC-Lavalin scandal). It’s still an amazing political image, but half the people in it are ghosts now.

It was, in contrast, distinctly un-sunny as the first cabinet of the 44th Parliament was sworn in on Tuesday, following the government’s dour sort-of victory with a minority parliament on Sept. 20. A gorgeous autumn in Ottawa had finally given way to proper fall gloom, and the day was truly miserable, with rain flooding the grounds of Rideau Hall and everyone standing on it.

The CBC producer made one more jokey attempt to get something out of Trudeau before he disappeared from view. “What does this ministry mean?” he called out. “Lots of hard work ahead, looking forward to today,” Trudeau grinned in non-response.

Further down the lawn, beyond a web of paths that connected to the driveway, shuttle buses were visible through the trees. The new cabinet members, walking with their family members, all in masks and sheltered by umbrellas, were deployed at regular, deliberate intervals like bridesmaids, by some unseen staffer.

In the midst of this puppet theatre, though, there were delightful moments of real humanity.

“Good morning, Minister Ien, how does that sound?” the producer called when Marci Ien, a former broadcaster and relative newcomer representing Toronto Centre, walked past on the way to being sworn in as minister for women and gender quality and youth. “It sounds amazing,” she replied, and there was nothing canned in the sentiment packed into that last word.

Ahmed Hussen, about to become minister of housing and diversity and inclusion, was the only one to walk solo into Rideau Hall; the rest of his family is presumably busy with the new baby—his fourth— that they welcomed just days earlier.

IMAGE OF THE WEEK: It’s raining, it’s pouring, the PM names a cabinet

Carla Qualtrough retained her role as minister of employment, workforce development and disability inclusion, and on her way into the ceremony displayed truly excellent comedic flair. “I can’t see because of my glasses,” she laughed to the media, as her lenses fogged over above her mask. “Well, I can’t see anyway,” quipped Qualtrough, a lawyer and Paralympic medal-winning swimmer who happens to be legally blind.

Marc Miller, who would move from Indigenous services to crown-Indigenous relations, was the last minister up the driveway and through the doors, sporting a stunning robin’s egg-blue beadwork mask made by Tania Clute, an artist from Akwesasne.

In broad strokes, the moving cabinet pieces that came together through the swearing-in ceremony inside Rideau Hall looked an awful lot like putting serious people in charge of serious files to which they are well-suited.

Trudeau had previously announced that Chrystia Freeland would stay on as deputy prime minister and finance minister, and she increasingly looks set up to be his heir apparent.

The appointment of Steven Guilbeault, a former Greenpeace activist and founding member of the Quebec environmental organization Équiterre, as minister of environment and climate change suggests some real teeth on that critical file. Anita Anand, who as procurement minister was credited with the successful effort to obtain Canada’s COVID-19 vaccines, takes over the troubled file of national defence from Harjit Sajjan, who was heavily criticized for how he handled sexual misconduct in the military. Sajjan, notably, was not booted from cabinet but rather moved to international development and the newly-created Pacific Economic Development Agency of Canada.

Jean-Yves Duclos, an economist widely regarded as smart, thoughtful and willing to explain things, takes over the health ministry at a crucial moment as Canada (knock wood) exits the COVID era. But while it might have been expected that public health or pandemic preparedness would be carved off that file, it was mental health and addictions that became its own ministry, under Carolyn Bennett.

Melanie Joly, formerly minister of official languages and economic development, got a major promotion to succeed Marc Garneau—no longer in cabinet but rumoured to be up for the lovely consolation prize of an ambassadorship in France—as foreign minister. Joly’s appointment is slightly baffling as nothing in her background nods at this role, and as my colleague Marie-Danielle Smith put it, the appointment “seems to say more about Joly and the Liberal Party’s future than it does about Trudeau’s foreign policy agenda.” Or perhaps what it says about Trudeau’s interest in foreign policy is that there isn’t much.

Rounding out what are likely to be the bold-faced names of this parliament is Karina Gould, who becomes minister of families, children and social development. Given the government’s desire to establish a national daycare program—a transformative, generational effort if they can succeed where so many have fallen short so many times—that will be a hefty file.

The implacable math of precedent and politics dictates that Trudeau may have already fought his last election as leader—though when he was asked directly on Tuesday whether he would lead the Liberals in the next election campaign, he answered “Yes,” with deliberate abruptness. Even if he wages one more campaign—with a minority parliament, it could come just a year from now—he is certainly on the downslope of his time as Prime Minister, and that means it’s time to think about legacy.

“Canadians are expecting big things to be done by parliament and by this government,” he said on Tuesday. “Whether it’s continuing to step up more and faster in the fight against climate change, whether it’s moving forward in even more concrete and tangible ways on the path of reconciliation, or whether it’s looking at what it really means to build back better and ensure that as we grow our economy, everyone gets included. These are no small tasks, these are the things that Canadians expect us to do.”

He has built what looks like a grown-up cabinet, with smart and substantial people plugged into big and difficult roles—Anand, Guilbeault and Duclos being the most vivid examples, with the most relevant files for the moment—for which their skills and strengths are well-suited.

The best legacy move at this point might be the one most difficult to execute because of how it contradicts all the demonstrable tendencies of this government to have everything orbit the political centre like a solar system: just give these smart people you picked the space to do their jobs. Having government ministers who can think and do, and talk (more or less) freely about that thinking and doing is good for everyone.

But there is also this: Team Trudeau can’t be Team Trudeau forever, or perhaps even for very much longer. It would be excellent for everyone involved—including the eponymous man himself, his party and his legacy—if the cabinet full of serious people sworn in on Tuesday were allowed to do serious things and wield serious power, so that at some point in the future when they are needed, serious contenders for the crown are waiting.