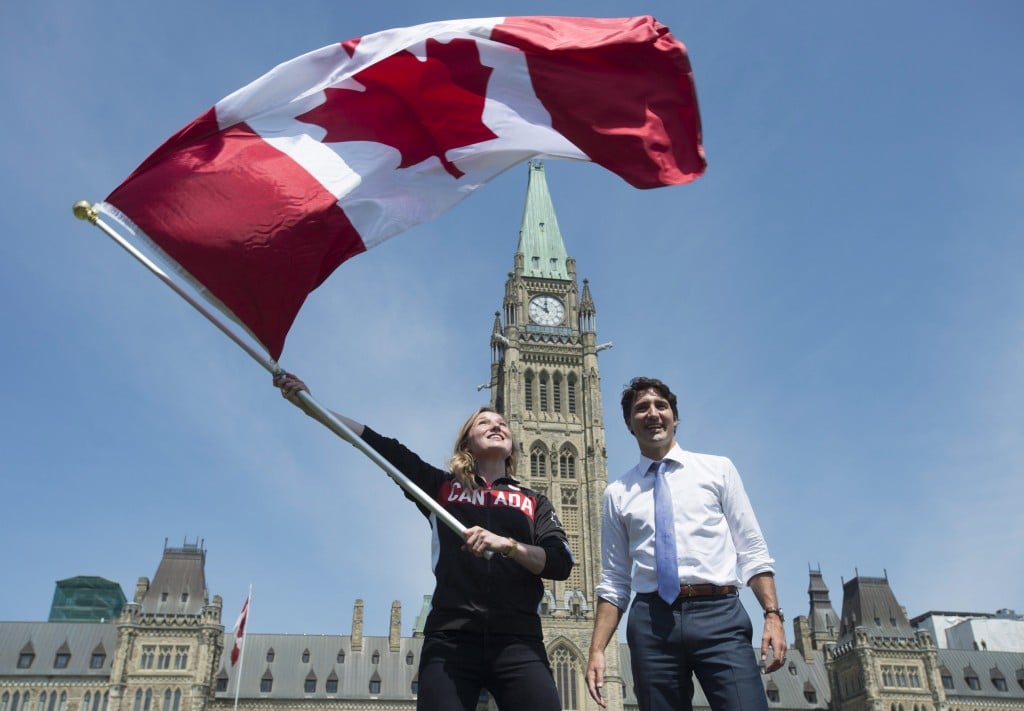 Canadian Prime Minister Justin Trudeau looks on as athlete Rosie MacLennan waves the Maple Leaf after being named as the flag bearer for the upcoming Summer Olympics Thursday July 21, 2016 in Ottawa. THE CANADIAN PRESS/Adrian Wyld

Stephen Harper always loved the Olympics, and so does Justin Trudeau. They tweet about our athletes. Wear the colours. Like high school kids who rent cheap prom tuxedos to distract from their pimply faces and gangly limbs, politicians put on the Olympic suit of national pride. And why not? Who doesn’t feel inspired when our Canadian athletes, like the extraordinary women’s sevens rugby squad or swimmer Kylie Masse, stand on the podium and beam out that Canadian spirit. But for prime ministers, it’s also a useful diversion. Their main event is managing the economy, and not even the Olympic costume can hide the giant blemish on the government’s economic agenda. Last month’s jobs numbers revealed that the Canadian economy didn’t just miss the podium, it’s barely competitive. Team Trudeau has an Olympic-sized problem: job growth.

According to Statistics Canada’s monthly Labour Force survey, Canada lost 31,000 jobs in July, while the unemployment rate went up by 0.1 per cent. Worse, 71,000 full time jobs got smoked between June and July, the kind of jobs governments brag about when they actually appear. The only growth was in part-time work, which went up 0.4 per cent compared to this period last year. That’s like getting a bronze medal in juggling. Trudeau promised to create jobs for young people, but according to Stats Can, employment for people between the ages of 15 to 24 actually decreased in July by 28,000.

Lots of this bad news has to do with Alberta, which has been scorched by low commodity prices and now has its highest levels of unemployment since 1994, at 8.6 per cent. But it’s not all to blame. There were heavy job losses in the public sector as well, across the country. Meanwhile, with a low dollar and low interest rates, manufacturing provinces like Ontario were expected to have job growth, but sorry, no dice. Employment in Ontario actually fell by 36,000 jobs while more people simply dropped out of the labour force altogether. B.C. remains a good story, with the country’s lowest unemployment rate and real growth in the jobs number, but still, combined with Canada’s growing trade deficit, July was not an Own the Economic Podium moment for the Liberals.

What’s the solution? Well, that is the question of the moment. Some argue the money from those child benefit cheques that just went out will add a bit of a boost, but it is way too early to tell what impact they will have. The huge Budget 2016 deficit spend on infrastructure is a complicated roll-out and will take years to start really moving the economic needle as new projects get under way. Will it work? Economists call the Liberal plan “counter cyclical fiscal policy”—the idea of spending big in down times and raising revenues, i.e. taxing, in boom times. But with the long lag time of the projects and big deficits that mount in the meantime, its efficacy is something of an argument without end, and divides the left and the right. Does fiscal stimulus work alone or are lower taxes and, on the monetary side, low interest rates more effective?

Canada is in a double bind in that we have deployed pretty much every strategy already. We’ve had fiscal stimulus, we’ve spent the last decade lowering tax rates, and, on the monetary side, the Bank of Canada has kept interest rates at historically low levels for years. So, when the hazy daze of Olympic fever burns off, what will the Trudeau government face in the fall?

“The drops in the employment and participation rates over the past year must be a concern to the government,” says Kevin Page, the former parliamentary budget officer who now teaches at the University of Ottawa. His forecast is bleak. “Full-time job growth is negative on a year over year basis—very unusual. Youth participation rates have fallen off, not a good sign when the economy is transitioning through aging demographics. Real gross business investment has been declining since the fall of 2014—not good for [the] future [of the] economy.” So what does Page think the government can do, now that it has already bet its future on the first budget? “A case could be made for the government to come forward with an early fall fiscal update,” he says. “It would be helpful to update Parliament on the economy, the status of Budget 2016 implementation and options to move forward measures to strengthen stimulus over the short term.”

The government’s plans, like expanding CPP, putting a price on carbon and investing in infrastructure have to be filtered through the prism of increased global economic uncertainty. The Liberals have big ideas, but no one is sure if they have the right policies to make sure their ideas actually create jobs. Still, Page argues that the government should not abandon their ambitious ideas around things like climate change or pensions, for example, because that would only “kick the can down the road” for future generations. Others, however, disagree.

“I have a different take,” says Ian Lee, associate professor at the Sprott School of Business at Carleton University. Lee says that Canada’s demographic challenges, combined with low resource prices and slow U.S. growth are immune to the government’s fiscal interventions. “These structural problems are not affected by stimulus as stimulus will not stop the Boomers from getting older.”

In fact, Lee believes that both the federal government and some provincial governments are actually making things worse, actively dragging the economy down by imposing what he calls “anti-stimulus” measures, like increasing minimum wages, increasing the cost of electricity, increasing premiums for CPP, and preparing for a federal price on carbon. “Not all of these have kicked in yet,” he admits, “but they have influenced the business climate and caused business investment — a critical driver of growth — to decline.” He thinks the government ought to put all those plans on hold.

One month does not tell the whole economic story—it could be, as Conservative critic Lisa Raitt admitted, “a blip”—but long after the gaudy closing Olympic ceremony on Aug. 21 in Maracana Stadium, after the world media departs and leaves Brazil to soak in the muddy mess left by its own burst economic bubble, Team Trudeau will have to deal with hard reality. This will be the main event in the fall, the event that will define the Conservative and NDP leadership races as their candidates pitch their solutions, and then, as the months and years grind on, the event that will decide whether or not Trudeau remains on the podium.