Trudeau’s pitch for Brand Canada in a Trumped-up world

Trudeau hopes to convince global investors that Canada is a safe harbour against the forces of protectionism and nationalism, but will they listen? 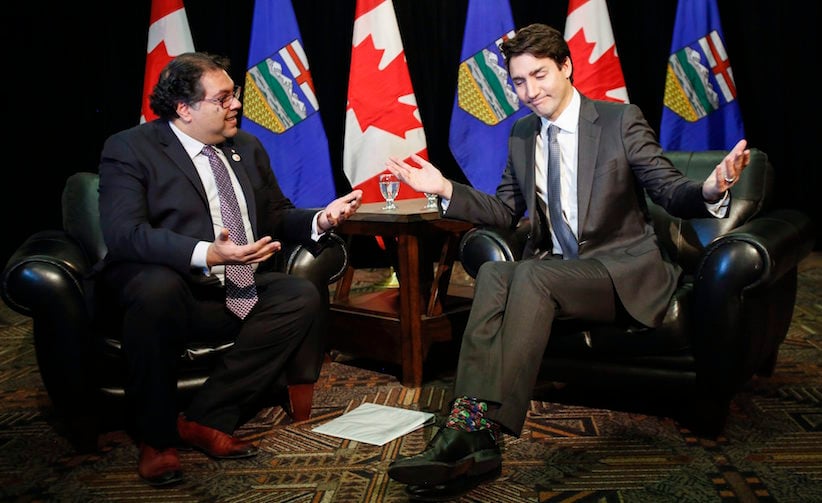 In a cavernous trade room hall full of 1,200 Calgary business types on Wednesday, Prime Minister Justin Trudeau made a dreadfully flat Calgary Flames joke, proclaimed upon Mayor Naheed Nenshi’s awesomeness, and made those same broadly positive statements about why pipelines and climate change action can go together to which the breakfast-goers could variously mouth along or nod off. Nine unremarkable minutes.

Then, he gave a series of entirely different and nearly as long speeches in the Chamber of Commerce event’s subsequent question-and-answer session with businesswoman and Dragons’ Den alumna Arlene Dickinson.

He delivered what sounded like a dress rehearsal for a speech about Canada’s stable position in a more ornery world—a speech he might make at next month’s World Economic Forum conclave in Davos—and offered some of the most striking prime ministerial advice about investment opportunities since Stephen Harper casually suggested bargains were to be had during 2008’s financial meltdown.

FOR THE RECORD: Justin Trudeau on the need for inclusive growth

The eyes of the world are on Trudeau in a new way in an era of Donald Trump, Brexit and the growing prospect of nationalism—economic and sociocultural—around the Western world. Trudeau and German Chancellor Angela Merkel get conveyed as the last refugee-embracing multilateralists left standing. Merkel faces an election next fall, and the heat on her just got cranked up further after this week’s terrorist attack in Berlin, allegedly by a Tunisian asylum seeker.

Trudeau’s agenda, too, is facing pressure to stop staying the course. His carbon-tax strategy is being attacked as detrimentally anti-competitive, given that the incoming U.S. president doubts the very premise that carbon dioxide poses a global hazard—a worry many energy executives at those Calgary banquet tables voice, as Alberta’s carbon tax takes effect on Jan. 1.

Trudeau’s response, he signalled, will be not to merely stay the course. He intends to position Canada to global investors as the Country That Is Not Trumpish:

“We know that maybe there is potential for short-term benefit by not engaging in the environment strongly, but we also know that in the medium term and in the long-term, jobs of the future, the opportunities of economic growth, the well-being of our citizens in future generations is going to be linked to figuring out better and smarter ways to do things … We know that this is the way the world is going, and if the United States wants to take a step back from it, quite frankly, I think we should look at that as an extraordinary opportunity for Canada and for Canadians, an opportunity to draw in investors who are focused on where the profits and the opportunities are going to be 10 years from now, 20 years from now, and people who want to do the right thing by their kids and grandkids.”

He said this in a crowd of some people who place multi-decade bets on oil sands projects, and week-to-week calls on where to place oil and gas wells, and many who straddle both. Some companies have pledged to reboot major projects because of the uptick in oil prices and pipeline approvals. Many are staying on the sidelines or retrenching. While the Prime Minister is musing about long-game dollars, the Alberta short term is clouded by high unemployment and desperation for as big a 2017 bounce-back as possible.

Trudeau’s ambition for this branding effort reaches beyond the realms of resources (where Trump wants to invest heavily) and green technology (a “hoax”!) as he says the global investment community fancies Canada as a safe harbour:

“And Canada is—I mean there’s lots of metrics you can look at that says it might be a little better to invest in this or that or the other thing, but as a whole what we have here in well-educated, diverse workforce, in access to resources, in positioning geographically to access markets back to Europe, sell to the United States, across the Pacific to Asia. Canada has extraordinary opportunities along with social, economic political stability that especially with the uncertainty about nativism, populism and anti-globalization, people on the world stage are very, very interested in: What is the secret of Canada? The secret of Canada, of course, is Canadians. We understand that diversity is a source of strength. We know that if we work hard and support our neighbours, we’ll do better than if we work hard and ignore our neighbours.”

In many ways it’s the classic Canadian speech that this country’s leaders have been delivering for generations, even if “it’s a bit countercultural right now,” says Glen Hodgson, senior fellow at the Conference Board of Canada.

Trudeau worries that economic anxieties are forcing the middle class to abandon a “growth agenda” that includes free trade and immigration, and if that leads countries to close themselves off, everyone is worse off, he told the crowd. “The long-term stability, the predictability that we are offering in Canada is extremely appealing in a world that is more and more unstable, in which the pushback against the forces of globalization, the fear of multinationals, the fear of international trade is running rampant in countries in democratic circles around the world that we manage to resist here in Canada,” he said to reporters later in the day.

His speech took the liberal message Trudeau brought to Davos last year, and updates it for far more pointy and starker global realities. In the January days leading up to Trump’s inauguration on the 20th, the Swiss town will again host those political and business elites who are vilified by those very movements Trudeau is posturing against. Themes for this year’s meeting are right out of Trudeau’s handbook: “strengthening systems for global collaboration” and “addressing identity through positive narratives.” The attendees list isn’t out, but it’s a safe bet Trudeau’s networking and speechifying would focus on this Canadian wager: that major foreign investors, big institutional players and multinational companies will stick with the same political and economic cultures to which they’ve always flocked, even if voters in Britain and United States have rejected them.

But is there advantage in wooing more idealistic investors’ approach in a world gone hard-nosed realist? Trudeau is offering major infrastructure spending and wants to lure big dollars to a Canadian infrastructure bank; Trump has mused about those same things, and the financial markets have swelled in anticipation that he will. He’s also likely to slash regulations and taxes, as well as inhibitions about exploiting and digging everywhere.

“We may have to cross that bridge as well, we may have to look at things in our tax system, to ensure there is not a significant disadvantage to operating in Canada,” Hodgson says. “But I do think the openness card is a good card for Canada to play right now, particularly because we now have a free trade deal with Europe.” As part of a recent investment tour to Asia, the economist found many players in Japan and Korea are rethinking their North American strategy: keep playing in the massive U.S. market, but look to its northern neighbour as a gateway to elsewhere. “It dawned upon them that engaging with Canada gave them more of a global opportunity,” Hodgson says.

Though in playing itself contra the United States, Trudeau may risk provoking the notoriously prickly Trump0—he may not mind being called populist or anti-globalization, but “nativist” is a sharper poke. The Prime Minister will have to balance egos and opportunities with our behemoth trading partner, even as he aggressively pursues overseas foreign investment by touting this emerging market niche for Canada. Impressing globalization’s heavyweights in Davos is fine, but not too much at the expense of the man who will swear the oath of office in Washington that same week.