Justin Trudeau has proposed a giant list of reforms. Will voters care as much as they say they do? 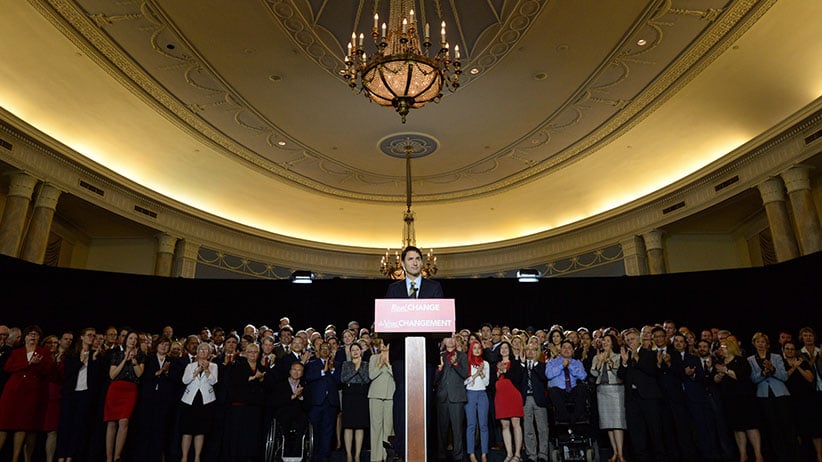 Do fans of democratic reform have a single itch that Justin Trudeau didn’t promise to scratch this week? I can’t think of any. In a 20-minute speech at the Château Laurier on Tuesday, and especially in a policy paper his Liberal party released simultaneously, Trudeau promised to change just about every facet of the way Canada’s governments, elections and Parliament function.

I’m going to list many—but not all—of Trudeau’s proposals now. If you believe Prime Minister Stephen Harper has essentially been a force for the comprehensive subversion of our democracy, go ahead and roll in this stuff like clover. It’ll be better than a vacation. If the Parliamentary Budget Office’s chain of command hadn’t really seemed a problem to you before, skip down a few paragraphs and we’ll continue to the analysis portion of our evening’s entertainment.

Trudeau promised to reinstitute secret-ballot elections to the chairmanship of parliamentary committees, something Jean Chrétien instituted under duress in a doomed attempt to stave off Paul Martin’s reformist hordes almost 15 years ago. He’ll create an “inclusive, representative, transparent, and accountable process to advise on appointments to the Supreme Court”—in case you were worried that any process might be accountable and representative, but not inclusive; or transparent and inclusive, but not accountable. He’ll “introduce a prime minister’s question period,” a reform I’ve advocated that amounts to telling future PMs they needn’t show up to QP the other four days of the week. He’ll “allow more time for questions and answers,” blowing up the 35-second shot clock that ensures nobody spends too much time saying anything thoughtful.
He’ll encourage “the use of online technologies to engage Canadians,” meaning, I suppose, email.

Related reading: In praise of the parliamentary committees

But, in case the server crashes, he’s also borrowed the NDP’s promise to “stop the Harper Conservatives’ plan to end door-to-door mail delivery in Canada.” (Note that this is not a promise to restore door-to-door delivery where it has been cut again and again since 1980, merely to cancel further cuts. As Chris Selley has written, this amounts to a pledge to enshrine 2013 as the summit of perfection for Canadian home mail delivery.)

A Trudeau government would: ensure the estimates and public accounts are written using the same accounting methods; allow all-party parliamentary oversight of “every government department and agency with national security responsibilities”; make the aforementioned parliamentary budget officer “answerable only, and directly, to Parliament”; and never again “use prorogation to avoid difficult political circumstances.”

The Liberals, in office, would: “end Stephen Harper’s practice of using inappropriate omnibus bills”; ban “partisan government ads”; and put an end to the foul and nefarious practice of allowing private businesses and members of the public to organize debates among federal party leaders. While we wait for that happy day, make sure to tune into City, Omni and CPAC for the Maclean’s national leaders’ debate on Aug. 6!

Oh, and under Trudeau, 2015 would be “the last federal election conducted under the first-past-the-post voting system.  That’s the system whereby the candidate in your riding with the largest number of votes becomes your MP. What would replace it? Something. An all-party committee of MPs would consider the possibilities—Proportional representation? The Australian system, which I’m sure somebody is just waiting to explain?—and report back so quickly, a Trudeau government could “bring forward legislation to enact electoral reform” within its first 18 months.
HEY! OVER HERE! I’M DONE WITH THE LIST!

So what’s it all mean? Well, for starters, the Liberal party should have sent this project to Preston Manning, the Reform party’s founding leader, and asked for an endorsement. I have a hard time believing Manning wouldn’t love most of this. I like a lot of it. It makes no sense to write estimates and public accounts in different geek code, and question period would be less awful if everyone had more time to make their points. Canada’s information laws are obsolete. Harper used to say so. Harper used to call for much of what Trudeau now proposes. Part of Trudeau’s challenge is to persuade people he means it more than Harper did.

There is a Lucy’s-football element to democratic reform, forever pulled away at the crucial moment, that makes each generation’s promises harder to believe. Brian Mulroney ran as a reformer, too, after all, and Chrétien, and Harper. Maybe Trudeau’s reforms will seem so sweeping, they’ll be more persuasive. He is essentially running on 20 years of Andrew Coyne columns. It’s so earnest, you could cry.

I keep seeing polls that suggest people believe the health of our democratic system is a pressing national concern. If those polls are right, and if people believe Trudeau’s proposals would make a difference, and if they believe giving him a chance to fix our institutions outweighs any misgivings they have about him, then he can only gain. That sentence has three “ifs” in it.