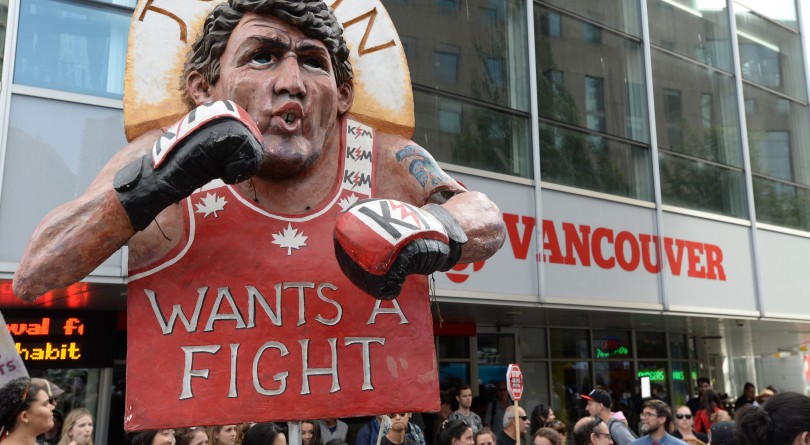 Approval 2.0: A day after Liberal MPs unanimously voted in the House of Commons to declare a “national climate emergency“—though without their leader who was away in Toronto for the Raptors victory parade—the Trudeau government gave the go ahead to the Trans Mountain pipeline expansion. The project has been in limbo since a federal court of appeal ruled that an earlier approval process had been insufficient consultation with Indigenous groups and that the environmental review was lacking. Now, after tapping former Supreme Court Justice Frank Iacobucci to re-engage with Indigenous leaders, the Trudeau cabinet re-approved the pipeline. If completed it will boost the flow of diluted bitumen along that route to close to one million barrels a day. (National Post)

That’s still a big if. First Nations in B.C. quickly announced they would launch a new court challenge to have the Trans Mountain approval overturned once again. “We believe the consultation missed the mark set by the federal court of Canada,” said Leah George-Wilson, chief of Tsleil-Waututh Nation. Meanwhile Chief Judy Wilson of the Neskonlith First Nation declared, “The approval of the Trans Mountain Pipeline is a continuation of the colonial act of genocide.” (Toronto Star)

Finally: Next up on the energy and environment news front is Andrew Scheer. Later today the Conservative leader will unveil his long-awaited climate plan, which he’s been promising since 2017. Details from the plan began floating around yesterday. Gone would be the national carbon tax—no surprise there. Instead large emitters will be penalized for every tonne of emissions over 40 kilotonnes. The penalty: emitters would have to invest in research, development and adoption of emissions-reducing technology. (CBC News)

A big part of Scheer’s plan will also focus on getting other countries to cut their emissions instead through something the Conservatives are calling the Canadian Clean Brand. (Toronto Sun)

Ahead of Scheer’s speech, Liberal ministers have been eagerly pre-butting his credibility when it comes to climate change and the environment. Problem is, their own party doesn’t have much to brag about either, writes Paul Wells:

Conservatism in Canada is so closely associated with the resource-producing regions—they’re not synonymous, but the Venn overlap is considerable—that you rarely see a Canadian equivalent of some big-city U.S. Republicans calling for carbon pricing. Mike Chong tried in the 2017 Conservative leadership race, and the extent to which his presence was barely tolerated at leadership debates was amazing to behold.

The Liberal ministers were on solid ground pre-butting Scheer’s credibility. Perhaps they were surprised, then, to find reporters questioning their own credibility. “Do you think you have the credibility to do this when your plan won’t even hit the targets?” one reporter asked. (Maclean’s)

Mr. Congeniality: How serious is U.S. trade czar Robert Lighthizer about working with Democrats to get the USMCA trade deal ratified? He’s taken to complimenting one of his boss’s favourite punching bags: Nancy Pelosi. While Donald Trump has attacked the House Speaker as “Crazy Nancy” and said she’s not smart enough to understand the trade deal, Lighthizer instead testified at the U.S. Senate finance committee that Pelosi “has been completely fair and above board and, I think, constructive. I believe we’re on track. I think we’re making progress, and I’m hopeful on that score. And the speaker has been absolutely, as far as I’m concerned, exactly as you would hope she would be.”  (Canadian Press)

Another Liberal out: Frank Baylis, the Liberal MP for the Quebec riding of Pierrefonds-Dollard has joined others from his party in bowing out of the next election. Unlike many of the others who cited “spending more time with family” as their reason for leaving, Baylis kept mum on his own explanation. (Montreal Gazette)

Tick tock: With the remainder of the 42nd Parliament countable in hours at this point, here’s about as comprehensive a list of the unfinished legislation as you’re likely to find. (CTV News)

Spare some change: Canadians are deeply concerned about climate change. Just don’t ask them to pay anything to tackle it. Thirty-eight per cent of respondents to a Public Square Research and Maru/Blue survey for CBC said that “our survival depends on addressing” climate change and 25 per cent said it is a top priority” but the idea of paying carbon taxes doesn’t appeal—32 per cent said they don’t want to pay a penny, while 17 per cent are willing to pay, so long as its less than $100 a year. (CBC News)