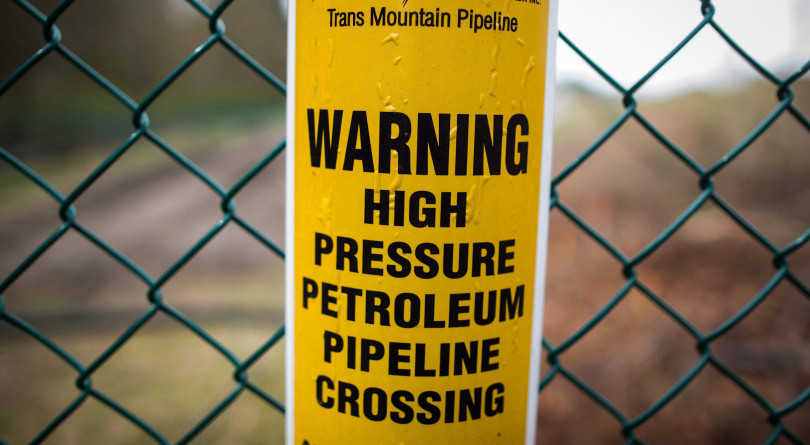 A sign warning of an underground petroleum pipeline is seen on a fence at Kinder Morgan's facility where work is being conducted in preparation for the expansion of the Trans Mountain Pipeline, in Burnaby, B.C., on April 9, 2018. (Darryl Dyck/CP)

It’s Trans Mountain deadline day, and the surprise will be if the federal cabinet doesn’t give the nod for the pipeline expansion project to move ahead. The Trudeau government, which bought the stalled pipeline last year, must decide—again—whether or not to proceed with it after a federal appeals court overturned an earlier approval last year. The court said Ottawa needed to do more to consulting with Indigenous communities and review the impact of increased tanker traffic on marine life, which it says it has. But even if Ottawa does give Trans Mountain the thumbs-up, it still faces a tough slog through legal challenges and pushback from environmentalists before any pipe hits the ground. (Bloomberg)

So many voters… er, Raptors fans: Wherever you have two million people tightly packed into a small space, you can be sure politicians won’t be far away. And so it was that politicians of all stripes descended on Toronto for the Raptors victory parade. Ontario Premier Doug Ford received audible confirmation of all those polls showing that not a lot of people in the province like him right now, while Prime Minister Justin Trudeau (who earned a mixed reaction from the crowd) did his best Howard Dean impression, screaming himself hoarse while the players bemusedly watched on behind him. (Maclean’s)

Climate S.O.S.: The Raptors celebration meant that Trudeau, Conservative leader Andrew Scheer and NDP leader Jagmeet Singh were all missing from the House Monday as MPs voted on a non-binding motion that declares a national climate emergency and confirms Canada’s goal of meeting the Paris Agreement’s emissions targets. Though the motion passed 186 to 63, the Conservatives all voted against it, as the Liberals had intended, though Scheer’s absence sort of defeated the purpose of trying to put him on the spot. (CTV News)

Game of sticks and stones: Do Senators need rules forcing them to be nicer to each other on social media? Independent Sen. Tony Dean argues the Senate’s administration should at least consider new guidelines after online exchanges between senators and staff descended into “aggressive, harassing and, in some cases, bullying” behaviour. But at least one veteran of the Upper Chamber trenches, Conservative Sen. David Tkachuk, said the new batch of whipper-snapper Independent senators complaining about name-calling just don’t want to admit they’re just as partisan as Conservatives. Until they realize that, he said, “they can never come to the table as politicians in the game of politics.” (Canadian Press)

Um, yeah, that’s the point: People on Sparks St. in Ottawa today and at Yonge and Dundas in Toronto on Wednesday will likely notice several grown-ups dressed as bananas. They’ll be there on behalf of Canada Proud, the political advocacy group that’s paying them to don the fruit costumes and hand out anti-Trudeau brochures. And the Liberals aren’t happy about it. When CTV reached out to the party, a spokesperson said the stunt is “the same kind of dirty tricks that we can continue to expect from Conservatives and their allies in this election,” before affirming the whole point of the upcoming Conservative election campaign: “Their one goal is to try to elect another Conservative politician.” (CTV News)

One Liberal out, another forges ahead: Geng Tan, the Liberal MP who represents Don Valley North, Ont., is calling it quits and says he won’t run for re-election in October in order to spend more time with his family. Meanwhile Liberal MP Dominic LaBlanc, the New Brunswick Liberal MP who stepped down from cabinet earlier this year after he was diagnosed with non-Hodgkin lymphoma, says after three rounds of treatments he’s ready to run for re-election. (Canadian Press, CBC News)

Ethically speaking: For the majority of voters, ethics in government will be on their minds as they go to the polls in October. Nearly three-quarters of Canadians (73 per cent) said ethics in government will be a factor when casting their ballots, a Nanos Research poll found. Says pollster Nick Nanos: “What this speaks to is Canadians want to hear from politicians about ethics, transparency and how our government should run as a top issue.”  (Globe and Mail)

Greens up: A new poll from Ekos Research finds the Conservative lead over the Liberals narrowing, from an 11-point lead a month ago to 2.7 points now. But the real surprise in the poll, as David Akin observed, is that Elizabeth May‘s Green Party has clawed its way into third place for perhaps the first time in national polls, relegating Singh’s NDP to fourth. As Ekos notes: “The Green Party, which received just three per cent and a single seat in the last election, is now at 14 points and looking at capturing 12 seats should these numbers hold. This number will become particularly interesting if the combined Liberal and Green numbers surpass a majority of the seats. The NDP is struggling at just 14 seats. Any further erosion could move them out of official party status and into rump territory.” (Ekos)