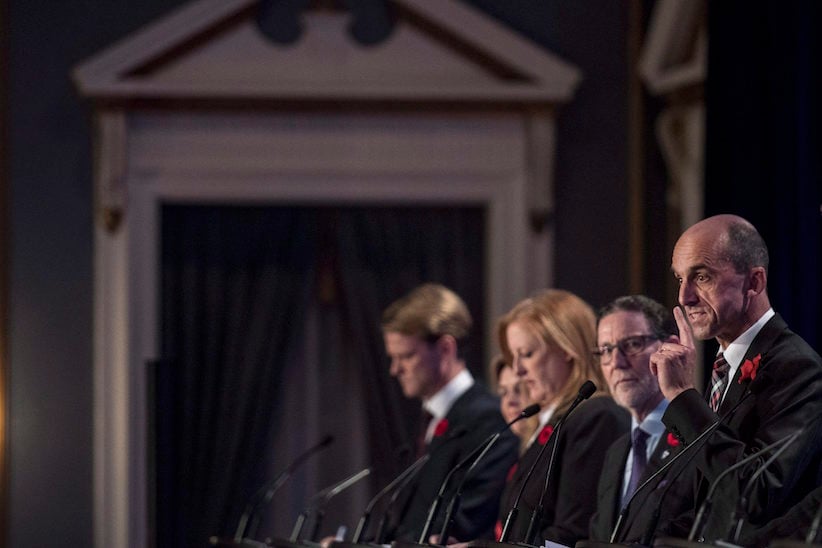 Leitch said in the first party leadership debate Wednesday night that only one in 10 people coming to Canada sees a trained immigration officer, and reiterated her controversial proposal that everyone should be screened for “Canadian values.”

On Facebook and in emails to supporters, Leitch hailed Trump’s election win as an “exciting message that needs to be delivered in Canada as well.”

“I’m running for the Conservative Party of Canada and maybe Ms. Leitch she’s thinking that she’s running for the Republican Party, I don’t know,” Bernier said to reporters after the debate in Saskatoon.

MP Deepak Obhrai, who is an immigrant, said Trump’s comments on immigration, which include a proposal to build a wall along the Mexican border and saying Muslims should be barred from entering the U.S., have no place in Canada.

Canadian values are evolving and not set values, he told reporters after the debate.

“Anybody can decide and design what a Canadian value is and when you give that power to the bureaucrats … I am not willing to think that is the right approach for this country and I can tell you that I would fight for that as not being something that Canada should be doing, because remember all of us are subsequent waves of immigrants coming into this country,” said Obhrai.

Leitch floated the screening idea earlier this year and has not backed off it despite criticism both inside and outside her party.

The 12 people vying to lead the federal Conservative Party also took jabs at the Trudeau government’s proposed carbon tax and backed the idea of pipelines in their first leadership debate.

“It is economic madness to impose a new tax on Canada’s economy. It’s economic madness when other countries around the world are abandoning the idea of a carbon tax. We need to fight this,” said MP Andrew Scheer, who represents a Saskatchewan riding.

Prime Minister Justin Trudeau plans to charge $10 per tonne of carbon starting in 2018 and increasing it to $50 by 2022. Trudeau also warned that carbon pricing will be imposed on provinces that don’t implement the tax or bring in a cap-and-trade system.

Trudeau promised all revenue generated by a carbon tax would flow back to the province or territory from which it came. Provinces can decide how to spend that money.

Everyone said they support free trade.

But there are also concerns about Trump wanting to renegotiate the North American Free Trade Agreement (NAFTA) and ditch the TransPacific Partnership (TPP), a massive free-trade proposal involving Canada and 11 other nations.

MP Brad Trost said: “I think we had to be part of the TPP, but the TPP is dead. It is a finished agreement.”

Trost said there isn’t enough support in Washington for the deal.

This was the first of five official party leadership debates.

The Conservatives are to elect their new leader May 27.