Tune in for an exciting new episode of Survivor Ottawa

Politics Insider for January 10: Singh finally gets his byelection, another Trudeau cabinet shuffle could be in the works and a look at the friction between elected leaders and hereditary chiefs in the LNG pipeline conflict 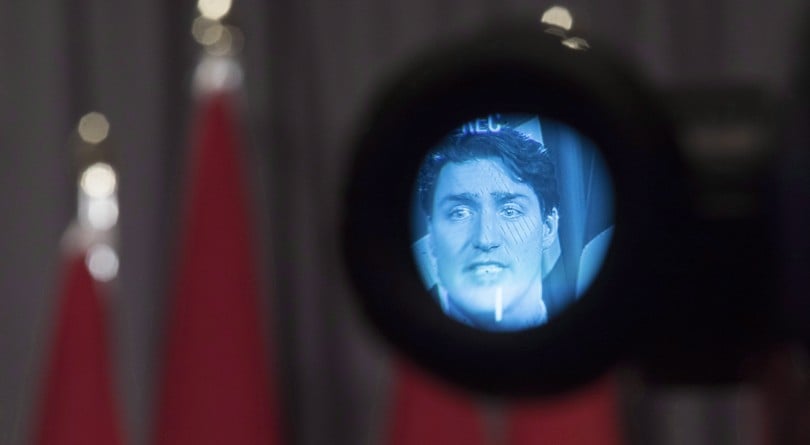 Canadian Prime Minister Justin Trudeau is pictured in the eyepiece of a television camera as he addresses the media following a summit meeting in Toronto with investors and members of the Canadian government, on Monday November 14 , 2016. THE CANADIAN PRESS/Chris Young

After dawdling for months, Prime Minister Justin Trudeau called a byelection for Burnaby South, where NDP leader Jagmeet Singh hopes to secure a seat in Parliament. The vote is set for Feb. 25. After the byelection was called Singh repeated a line from his speech at the NDP national convention a year ago: “The time for timid is over.” (Canadian Press)

Now all Singh needs to do is win. Even if he loses the byelection, though, he’s stated he’ll stay on as leader for the next election. Good luck with that, says Singh’s predecessor Thomas Mulcair : If Singh loses “it would be very, very difficult for him” to remain leader. “I think that anybody who knows anything about politics would agree with what I just said.” (CTV News)

Just shy of six months after Trudeau’s last cabinet shuffle, a new round of Survivor Ottawa may be coming. The Toronto Star‘s Susan Delacourt notes shuffle speculation is building ahead of cabinet retreat next week:

So what would prompt the Prime Minister to shift some jobs around the cabinet this January, besides a pre-election refresh?

One possibility would be to replace ministers who may be retiring or underperforming — views are mixed, for instance, on whether Trudeau has the strongest team in place to navigate the deeply polarized politics in 2019 surrounding the environment, pipelines and carbon taxes. (Toronto Star)

While visiting Kamloops, B.C. Wednesday, Trudeau defended the LNG pipeline at the heart of a blockade that resulted in 14 arrests and angry protests across the country. “We moved forward on the LNG Canada project, which is the largest private sector investment in Canada’s history, $40-billion, which is going to produce Canadian LNG that will supplant coal in Asia as a power source and do much for the environment,” he told supporters. Earlier in the day he told the CBC the arrests were “not an ideal situation.” (Canadian Press)

The conflict over the B.C. LNG pipeline has raised questions about the relationship between elected band councils and hereditary leaders when it comes to resource and development project—TransCanada had signed agreements with the elected leaders of First Nations along the route, but some hereditary leaders of the Wet’suwet’en traditional territory oppose the pipeline. Maclean’s staff writer Kyle Edwards spoke with Chief Robert Joseph, a hereditary chief of the Gwawaenuk First Nation on B.C. about what the dispute says about Ottawa’s attitude to First Nations.

Q: When it comes to things like pipelines, which side—elected band council or hereditary leadership—would have the final say in deciding whether it’s approved or not?

A:Essentially, unless there’s an internal agreement in a First Nation between the elected personnel and the hereditary personnel, traditional leadership has no say at all. They have no power to exercise any of their obligations. They have to work hard at trying to persuade the elected chief and council that it’s in the interest of the entire band that the two bodies work together.

Q: I imagine that creates tension.

A:It always causes friction. And sometimes the outside parties like the federal government or big corporations and other entities know this, and can use that as a tool to create the kind of divisions that fracture relationships. (Maclean’s)

After Trudeau filmed a fundraising video in his Centre Block office, critics crowd foul over the Liberal’s use of parliamentary space for partisan purposes. Now the Liberals are promising to pay $500 for the use of the space and return any donations the video generated. Colour NDP MP Charlie Angus unimpressed: “This government doesn’t get it. You don’t get to rent parliamentary offices for the prime minister to do promotion.” (Hill Times)