Monday's party was the third, and final, annual event hosted by the Heymans 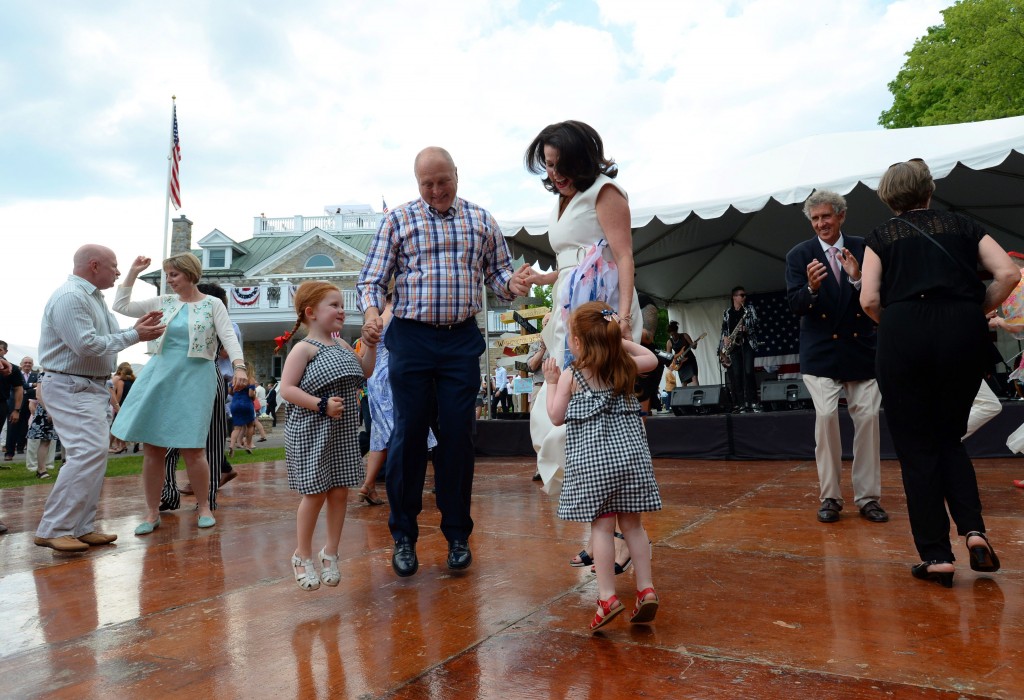 US Ambassador to Canada Bruce Heyman and wife Vicki dance with their grandaughters during the 4th of July celebrations at Lornado, the ambassador’s official residence, in Ottawa on Monday, July 4, 2016. THE CANADIAN PRESS/Sean Kilpatrick

OTTAWA – For U.S. Ambassador Bruce Heyman and his wife, Vicki, their annual Fourth of July bash on Monday was all about road-tripping.

The vast manicured lawn of their official residence, Lornado, in Ottawa’s tony Rockcliffe Park was an outdoor showroom of sorts, with vintage cars and motorcycles, lined up across from several white food and drink tents, all of it in keeping with this year’s “Road Trip USA” theme.

But like many of their Independence Day guests, the Heymans were still riding the high of last week’s visit to Ottawa by President Barack Obama, which lent an air of extra celebration to Monday’s festivities, one of the most sought-after tickets on political Ottawa’s social calendar.

Prior to Monday’s party – it was the Heymans’ third, and final, and largest with a record 4,000 guests expected – the effusive envoy told his own road-trip story.

It happened five days earlier and while it lasted 20 minutes, it was memorable. The car was a big, black and heavy limousine – one of a rare vintage.

Obama asked the Heymans to ride with him in “The Beast” as the souped-up, armoured Cadillac lumbered down Ottawa streets and along the Rideau Canal bound for Air Force One and the president’s return trip to Washington.

Obama and the Heymans know each other well; the couple headed the committee that helped raise money for his 2012 re-election and had been big supporters before his inaugural run for the presidency in 2008.

Obama asked them how it was going, and the ambassador spouted back how strong relations between the two countries currently were.

“He said, ‘that’s good; I know all that: how are the kids and what’s going on with the family?”’ Heyman recalled. So the ambassador told the president about the pending wedding of his daughter.

“He said, ‘way to bury the headline here? Oh my gosh, your daughter’s getting married. That’s fantastic.”’

The Heymans have been hyping the road trip theme of this year’s party through a series of online videos, but for thousands of the Heymans’ party guests, their journey began with an actual road trip: they were bused in from Ottawa’s baseball stadium, Raymond Chabot Grant Thornton Park.

Guests mingled on the lawn under a mainly blue summer sky as the Ceremonial Guard pipe band serenaded them from the front porch of the ambassador’s house. Heyman greeted members of the Ottawa diplomatic community next to a replica of a silver Allstream camper trailer.

Blue signs were posted on several trees throughout the ambassador’s property directing party guests to the rest area _ signs that depicted symbols of a man, a woman and a transgender person.

After the singing of the U.S. and Canadian national anthems, Heyman addressed his guests, a vast collection of politicians, diplomats, journalists, public servants, military officers bearing the colours of various countries, as well as Americans living in Canada.

Heyman traced the noticeable spike in Canada-U.S. relations since October when Justin Trudeau became prime minister and then visited the White House in March before hosting Obama here last week. Heyman said he experienced “incredibly intense emotions” seeing Canadian and U.S. flags twinned together on flagpoles in Washington in March.

And then it was party time. The Toronto band, The Digs, kicked off the night’s entertainment with a funky version of Tom Cochrane’s Canadian classic “Life is a Highway,” with the Heymans leading the way on the outdoor dance floor which quickly filled with guests.