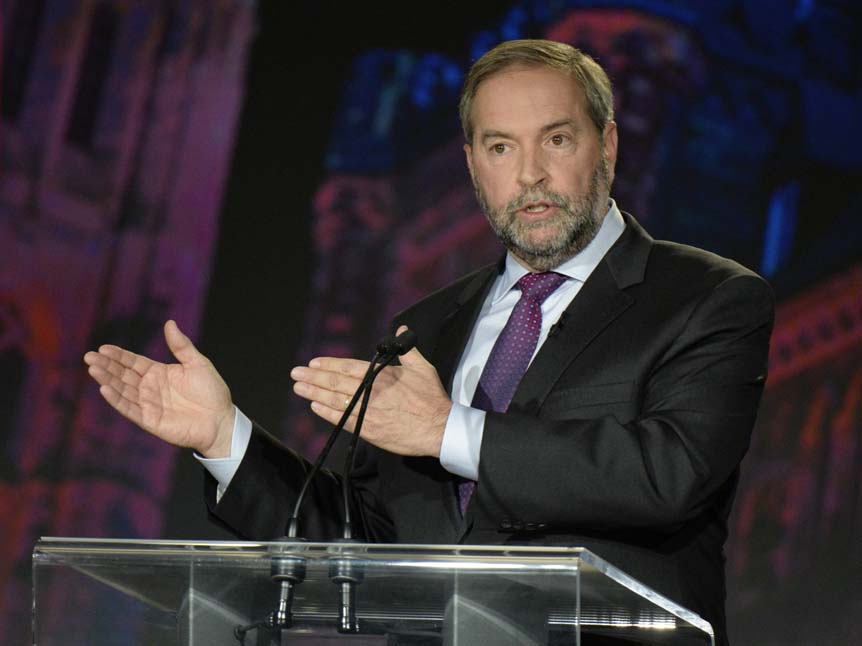 OTTAWA — Five union leaders are expressing support for Tom Mulcair ahead of next month’s NDP convention in Edmonton, where party members will decide if he should remain at the helm of the party.

In a statement released Tuesday, the labour leaders say Mulcair has proven his ability to provide a “true progressive” alternative to the Liberal government.

It’s all part of a broader campaign by supporters from across the country to help Mulcair stay on as NDP leader.

“Mulcair is known and respected throughout every part of Canada and has the organic relationship with Quebec to keep and expand our strongest geographic base,” the statement said.

More than 1,500 rank-and-file members of the NDP are expected to congregate in Edmonton for the party’s convention April 8-10.

Ahead of this event, Mulcair has been actively meeting with supporters across the country, trying to persuade party faithful he is best positioned take the party beyond October’s disappointing third-place election results.

Meeting face-to-face with members has been an important part of the post-mortem process, according to CUPE National President Mark Hancock.

“If he sort of curled up in a ball after the election, we wouldn’t be supporting him, obviously,” Hancock said in an interview with The Canadian Press.

“The NDP and the labour movement — we like fighters. We like people who are willing to stand up for values and Tom really exemplifies that.”

“He’s a very progressive individual and his priorities are the priorities of our members,” he said. “His values are our values.”

There are many lessons to learn from the 2015 campaign, but Mulcair has worked tirelessly to figure out what went wrong and what went right, said NDP House leader Peter Julian.

The campaign is also being closely examined by a working group lead by NDP President Rebecca Blaikie.

“I think that’s when you see really effective leadership, when a leader is willing to go across the country, hear from the grassroots … that is going to, no doubt, help us as we move forward to hold,” Julian said.

Julian said he gets the impression there is “very clear support” for Mulcair from the grassroots.

“It’s not unanimous of course,” he said. “In our party, that is healthy, democratic debate but it is very strong. I’m very confident moving forward.”

In an interview earlier this month, Mulcair said meeting rank-and-file supporters has been “like a tonic” for him following the election.

The meetings also allowed him the chance to interact face-to-face with supporters _ something he didn’t have much chance to do when the party was the official Opposition. “That’s given me energy,” he said.

Mulcair has faced criticism in the weeks leading up to the convention, notably from a group of New Democrat Quebec activists _ including three defeated MPs _ who called on the party to go in a new direction.

Jamie Nicholls, Elaine Michaud and Helene LeBlanc said they did not feel represented in the NDP electoral platform they had to defend last year.

And during a recent press conference in Ottawa, NDP MP Niki Ashton also refused to categorically state whether she wants Mulcair to stay on as party leader.

She ran against Mulcair for leader in 2012.

“It’s up to members to decide how they want to go forward,” she said.

Mulcair has refused to say what level of support would prompt him to quit but Blaikie has suggested 70 per cent is a likely threshold.