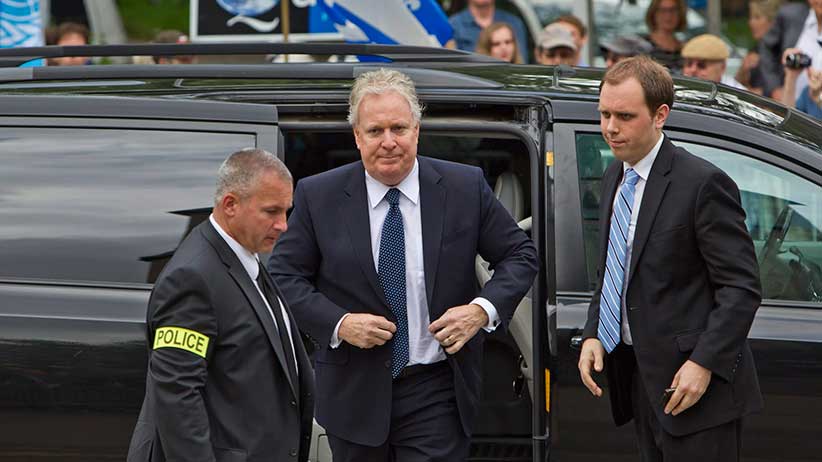 OTTAWA — They were there to talk about foreign policy and defence, but three former political heavyweights ended up giving the Trudeau government some unsolicited advice on leadership and trade issues.

Members of the Liberal government’s defence review advisory panel were there taking notes along side the diplomatic community, top military brass and the defence industry representatives.

Manley and Charest both warned about the urgency of completing trade deals started by the Harper government, including the European free trade agreement.

They also said Canada needs to develop a Plan B if the Trans-Pacfiic Partnership agreement is rejected by the U.S. Congress.

At the same time, each of the former politicians talked in turn about the necessity of public policy consultation, but warned it shouldn’t be open-ended, nor used as an excuse for doing nothing.

The Trudeau government is in the extraordinary position of being more popular than when it was elected, and it should take advantage of that good will to make decisions that are difficult, said Rae and Manley.

“Reviews are fine, (but) I hate them,” said Manley. “I’ve always thought they are a method of delay and you can have consultation constipation and just not get to actually governing.”

The blunt assessment comes as the Liberals hold a cross-Canada examination of the country’s defence policy, the first time in two decades the public has been asked for input on the role the military should play in the federal government’s foreign policy framework. But it is also hosting a myriad of other reviews with the stated aim of making government more open and accessible.

Some of the current popularity is based on the fact that it has yet to make uncomfortable, unpopular decisions, said Manley.

“The government has thoroughly mastered ‘yes.’ They are really good at (saying) ‘yes,’ but governing is to choose and eventually you’ve got to say ‘no’ to somebody,” he said. “Not everyone is going to approve of everything you do.”

Manley also said, when it comes to defence spending there has to be trust between those in uniform and the politicians who sign the cheques — something that is occasionally in short supply.

At the moment, Canada spends about one per cent of its gross domestic product on the military — about half the NATO standard — and has repeatedly faced calls from allies to increase the amount.

The debate over the adequate level of defence spending should be subordinate to explaining how they are going to spend the money and what effect they hope to achieve, the panellists said.

“Our defence situation is pitiful, especially if we compare ourselves to the rest of the world,” said Charest, who also warned that Canada could face increased pressure in the future because the shifting geo-political landscape.

The possible election of Donald Trump as U.S. president, with his remarks about freeloading allies and anti-free trade rhetoric, would send shockwaves through the Canada-U.S. relationship, Rae said.