Evan Solomon on how B.C. Greens might hamper the NDP’s federal chances 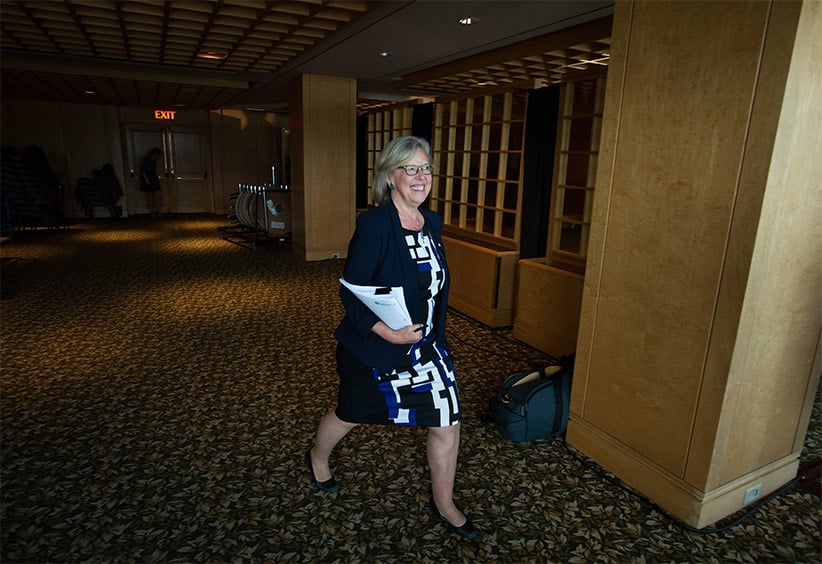 To hear Elizabeth May describe it, you’d think the Green party was caught urinating in the NDP’s coffee mugs. That’s how nasty the battle between the Greens and the NDP is shaping up on Vancouver Island.

“Every Green volunteer knows that whenever another campaign is mean to you, it’s always the NDP,” the Green party leader told me recently, sounding vaguely as though we were having a recess conversation in junior high. Mean to you? She clariﬁed. “They would like the Green party to disappear, because they believe we are stealing their votes. We aren’t. We win by increasing voter turnout. The focus of the Green party is to defeat Stephen Harper.”

I was talking to May because I’m interested in how vote splitting might affect the entire campaign and, while Vancouver Island is a small skirmish, it’s worth examining. In the long war that is a federal election campaign, often these side battles—where a few seats are up for grabs—reveal wider patterns. Usually the election result is called long before the good folks of B.C. have had their votes counted, but, as Éric Grenier from the political polling website ThreeHundredEight.com has pointed out, for the first time in 36 years, B.C. could well decide the next government. So Green votes matter.

In other words, despite what May says, Greens do take away potential votes from the NDP. So, yeah, I’m sure there’s not a lot of Kumbaya on the campaign trail.

“Historically, the NDP thought they were the conscience of the nation,” May says, her analysis moving seamlessly from polls to policy to psychology. “The problem for them is [that] now the Greens are the conscience of the nation. We were first to oppose the Conservatives’ anti-terror bill, C-51. To try to achieve power, the NDP have had to compromise their principles, and that has led to a bitterness against us.”

Mention all this to the NDP and their eyes practically do backflips. They patiently point out that Leader Thomas Mulcair was the environment minister in Quebec (they redact the word “Liberal” from that title) and he lowered greenhouse gas emissions. And the NDP also opposed C-51. Oh—and if May is so concerned about taking Conservative seats, why, you might wonder, are the Greens running so hard in the riding of Victoria to unseat incumbent NDP Murray Rankin? “There is no evidence to suggest that there is on-the-ground competition between the NDP and the Greens,” says NDP strategist Brad Lavigne. “The focus for the NDP in B.C. is to defeat and replace Stephen Harper.” Right. Of course. Didn’t the Greens just say that?

The Green-NDP scrap in the petri dish of Vancouver Island just illustrates the wider issue of vote splitting. Every opposition party repeats the mantra that it’s all about defeating Harper, but they all know that most of their potential votes lie with each other.

Pollster Frank Graves from EKOS sent me a chart to illustrate. Thirty-eight per cent of NDP voters have Liberals as their second choice, while 49 per cent of Liberal voters have the NDP as their second choice. So the real game here is the potential vote switching between the NDP and the Liberals. Which explains why Trudeau and Mulcair are sniping at each other so readily. Gotta fish where the fishes are. (It’s worth remembering, however, that in the last election, it was red-blue switchers in Ontario that stopped the Orange Wave.)

No one is watching this more closely than Harper. His campaign so far has been a circus of stumbles, from dumping candidates (yes, “peegate” is now a word) to the political tattoo that is Mike Duffy. But now, the man obsessed with slaying deficits is facing one he appears ill-equipped to handle: a compassion deficit. The Syrian refugee crisis that snapped into focus with the horrific picture of three-year-old Alan Kurdi dead on a Turkish beach has pushed the Conservatives even further off his agenda. Harper’s technocratic iciness serves him well when talking about abstract concepts like deficits, but this flesh-and-blood crisis has left him looking like a robot waiting for a software upgrade: Human 2.0.

That’s why, for Harper, the vote split is the only real option. With almost 60 per cent of the country saying it’s time to change, he has to watch how the change vote breaks between the NDP and the Liberals. Watch for Conservative attack ads to switch more heavily over to Mulcair if the NDP keeps surging. Harper wants both opposition leaders just politically viable enough to lose.

“The reason why the Tories are still competitive is because of the split among these ‘change’ voters,” says David Coletto. “ If the NDP got 60 per cent of change voters to support it, its ballot number would go from 31 per cent nationally to 40 per cent nationally, putting it in majority territory.”

The same works for the Liberals. So far, the change vote has not consolidated around a single agent, and Harper hopes he trundles up the middle to win. He well knows how the split on the right served up majorities to Jean Chrétien. He cooks from the same book.

So every little split matters, particularly in Ontario and B.C. And Elizabeth May, like every other leader, is betting her future on it.