Vincent's nature, not his tragedy: the new Van Gogh show

The National Gallery's summer exhibit on the Dutch Post-Impressionist is devoid of faces, but full of the rhythms and riots of nature

It’s hard to look at a Vincent Van Gogh painting, especially certain great paintings, without thinking about his life. A café under a night sky is where the crazy genius stopped for a drink. A yellow house is where he lived a bit of his unhappy life. A room with a single bed must be where his troubled dreams arrived.

To try to wrench the art away from the artist’s endlessly mythologized biography would be futile, of course, but the new show, Van Gogh: Up Close, which opens at the National Gallery of Canada in Ottawa this week for what’s bound to be a popular summer run, offers the best chance yet to take in the paintings without summoning Vincent’s story at every turn.

This is largely because the exhibition is almost entirely devoid of those evocative houses, cafés, rooms and, above all, faces—especially his poignant self portraits. Instead, the curators have gathered together 47 amazing paintings of flowers and grasses, sun-saturated fields and shadowy groves. As the show’s title indicates, the emphasis is on the radical way he zoomed, zeroed and honed in, bringing nature to the extreme foreground.

There is a serious exercise in art scholarship going on here, a demonstration that Van Gogh’s teeming compositions were inspired partly by Japanese prints and influenced by 19th-century photography. For me, though, the show is exhilarating not so much because I learned something new about the painter but because I was able to enjoy the paintings in a less clouded frame of mind.

They are all from Van Gogh’s final few years, from Paris in 1886, south to Arles in 1888 with Gaugin, and finally, seeking psychiatric treatment, to Saint-Remy and Auvers, where he died in 1890. Three early Paris paintings of cut flowers in vases find Vincent brilliantly making Impressionist technique his own. From Arles, a landscape with a high horizon line brings a tumult of blue irises and tall grass thrillingly close. Swaying grain fills a canvass from Auvers to the brim. 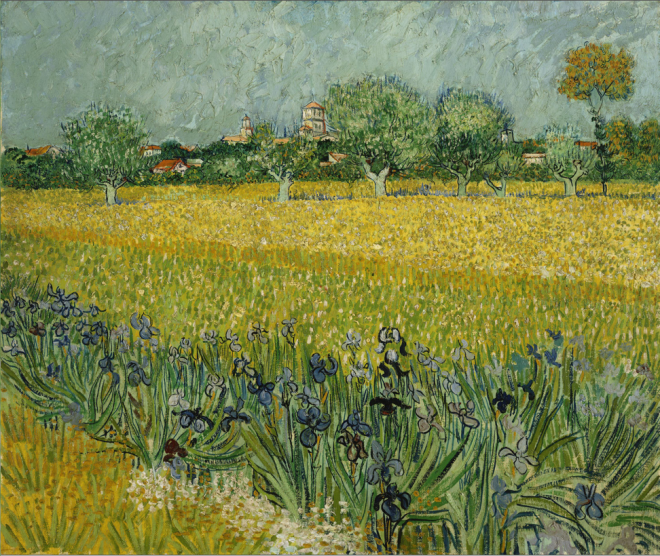 'Field with Flowers near Arles,' 1888 (Courtesy of the Van Gogh Museum Amsterdamn)

He looked directly into the blooms and stems and trunks and leaves. The cropping is tight. What surrounds the growing stuff, the landscape setting, is at best secondary. And the sordid details of any individual’s life are momentarily unimportant.

I mean unimportant to the viewer lost in that moment, but perhaps that was how it was for the painter, too. “I forget everything in favour of the external beauty of things, which I cannot reproduce, for in my pictures I render it as ugly and coarse, whereas nature seems perfect to me,” Vincent once wrote.

Needless to say, there’s nothing ugly on the walls of Van Gogh: Up Close. Still, taking in the show, it’s possible to see his point: the emphasis throughout is on the rhythm and riot of nature, rather than any settled harmony that might be called perfect. Until the very last painting in the show, that is—the 1890 masterpiece Almond Blossom, a delicately balanced close-up of branches in pinkish-white spring flower against a calming blue sky. 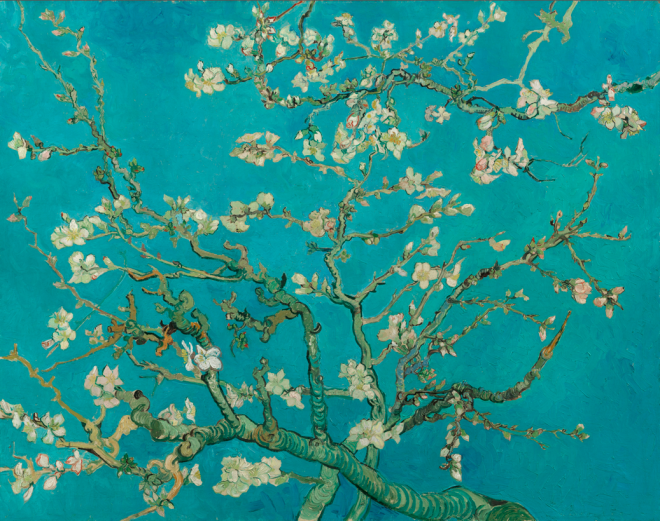 Vincent painted it near the end of his days to mark the birth of his brother Theo’s son, a baby named for his troubled uncle. Looking at that meditation on new life, each petal placed just so, and knowing its inspiration, is enough to bring anyone back from reveling in how Van Gogh captured nature to reflecting, as usual, on the last chapter of his sad story. The respite couldn’t last.

For other perspectives: Jennifer Ditchburn, of Canadian Press, covers the show here, with interesting quotes from one of its curators, Cornelia Homburg; and Peter Simpson of the Ottawa Citizen positions the exhibition in the context of recent research suggesting Van Gogh might not have committed suicide, as has long been thought, and also notes that he sold paintings during his lifetime, refuting the legend.