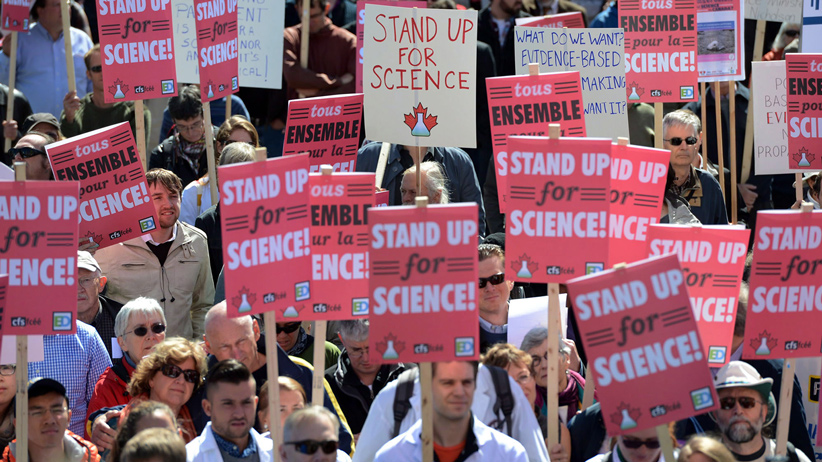 For once, I’ll get straight to the point. On page 154 of his (ominously long-delayed but now finally released) report to the Trudeau government on science research, David Naylor includes a chart spelling out how much it will cost to make Canadian scientists happy and productive. In the first year, he’s calling for $386 million in new funding, growing to $1.3 billion in the fourth year.

That number will seem crazy if you see scientists as fancy welfare bums. As a fan of the species, I see the number as surprisingly modest. But at least it’s a number. Naylor, the former University of Toronto president who was named by Science Minister Kirsty Duncan as the head of a “Fundamental Science Review Panel” last June, is not shy about specifics in his extraordinary new report.

Well, I call it a “new” report even though Naylor’s deadline for submitting it was December, and speculation persists about why nobody outside the Trudeau government saw the thing until Monday. Did somebody in the government decide the thing isn’t entirely welcome? In a brief interview after the news conference, Naylor blamed translation and design delays. Perhaps, then, it’s only a coincidence that the report was released after the federal budget.

Or perhaps it’s because Naylor’s “single most important recommendation” is a “rapid increase” in federal spending on “independent investigator-led research” instead of the “priority-driven targeted research” that two successive federal governments, Trudeau’s and Stephen Harper’s, have preferred in the last 8 or 10 federal budgets.

In English: Trudeau has imitated Harper in favouring high-profile, highly targeted research projects, on areas of study selected by political staffers in Ottawa, that are designed to attract star researchers from outside Canada so they can bolster the image of Canada as a research destination.

That’d be great if it wasn’t achieved by pruning budgets for the less spectacular research that most scientists do.

Naylor has numbers. “Between 2007-08 and 2015-16, the inflation-adjusted budgetary envelope for investigator-led research fell by 3 per cent while that for priority-driven research rose by 35 per cent,” he and his colleagues write. “As the number of researchers grew during this period, the real resources available per active researcher to do investigator-led research declined by about 35 per cent.”

And that’s not even taking into account the way two new programs—the $10-million-per-recipient Canada Excellence Research Chairs and the $1.5 billion Canada First Research Excellence Fund—are “further concentrating resources in the hands of smaller numbers of individuals and institutions.”

Those two programs, CFREF and CERC, are as popular with the Trudeau government as they were with Harper (Duncan, the science minister, launched a new round of CERC competitions after she had appointed Naylor, theoretically, to tell her whether such programs are a good idea). And Naylor recognizes that they’ve transformed a small number of university campuses.

But he hints strongly that both programs should be stopped in their tracks and re-evaluated to see whether they’re worth the money.

“Governments cannot short-change basic research and expect innovation to flourish,” Naylor told about 150 people who attended the release of his report at the Château Laurier. “Nor can they short-circuit the connections between research and innovation” by micromanaging science because business is too slow to adapt new methods and ideas. “Both those mindsets have been evident in recent years in Ottawa.”

To illustrate his point, Naylor mentioned Lewis Kay, the University of Toronto researcher who won a Gairdner Award last month—often a precursor to a Nobel—for cell imaging technology that is used in breakthroughs around the world. Kay has said that before the Globe and Mail called him to interview him about his Gairdner, he’d been doing this science for 25 years before any reporter had called him about anything.

The impact of the science, in other words, is often hard to reconcile with its profile. Maybe there’s no point in using media profile as a criterion for research funding.

“Governments investing in independent research don’t get media sunshine,” Naylor said. “But Canada cannot compete and win in the current global context without long-term investments in research that have long-term objectives.”

Now, perhaps this all sounds like some stick-in-the-mud science union looking jealously at the glamour projects and grumbling that the money could have been used to keep an army of boring scientists doing their boring research. Except that perception would be hard to square with who’s on Naylor’s panel.

In addition to Naylor, a former U of T president, there’s Robert Birgeneau, a former chancellor of the University of California, Berkeley. There’s Martha Piper, who was president of the University of British Columbia, and Martha Crago, who’s about to be McGill’s VP of Research. There’s Art McDonald, the Queen’s physicist who won a Nobel Prize in 2015. There’s Rémi Quirion, Quebec’s Chief Scientist. There’s Mike Lazaridis, whose pager business took a nasty turn but who has singlehandedly bankrolled much of the extraordinary research infrastructure around Waterloo, Ont.

There was considerable skepticism about Naylor’s panel among younger scientists, because it seemed custom-designed to parrot the orthodoxies of Ottawa’s research policymakers back to them. That is not at all how it’s turned out. Quebec’s Quirion, for instance, said that artificial intelligence is “very trendy these days” among policymakers. But 10 years ago, when today’s AI research stars were laying the foundations of their field in the very ways that have made Canada competitive today, “nobody wanted to talk to them.”

Naylor’s report is long and complex, with elements I haven’t begun to address here. But it states what’s very close to a consensus view among people who actually do science for a living in Canada. They had a hell of a decade from about 1997 to 2008, and they’ve had a pretty lousy decade since, while two governments in a row have slapped themselves on the back for a series of surprisingly similar policy decisions.

Now the question is what will happen to Naylor’s report. It may have arrived just a few months too late.

Every government comes to office convinced that everything is broken, and that only they will have the guts to fix it. Eventually, the government realizes that it’s hard to fix everything, and slips, unconsciously, into justifying things as they are. I’ve seen it happen before, with Jean Chrétien, with Harper: it’s like a bank of switches flips from “Everything’s Broken” to “Everything’s Fine.”

If the Trudeau government has already decided that the structure of Canada’s research programs is fine, and the logic of its funding decisions is beyond reproach, then Naylor’s report will seem an annoyance that’s best forgotten. One of the report’s challenges is that it will now be championed by Kirsty Duncan, politically one of the weakest ministers in Trudeau’s cabinet, against the awesome headwinds of Trudeau’s closest political advisors, who are pretty sure they know how to do science policy. Perhaps the Prime Minister himself will take some time to read Naylor’s report. What harm could it do?