Warning: travel to China at your own risk

Politics Insider for Dec. 12: China arrests a former diplomat to punish Canada, America wonders what comes after Trump's lies, and there's a stranger in the House 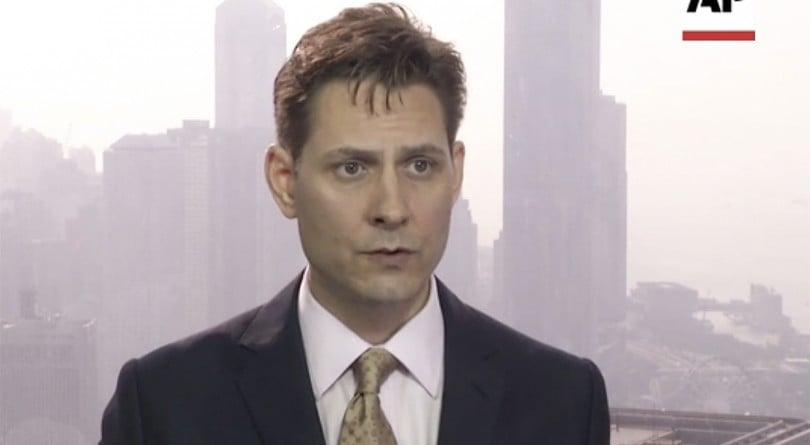 In this image made from a video taken on March 28, 2018, Michael Kovrig, an adviser with the International Crisis Group, a Brussels-based non-governmental organization, speaks during an interview in Hong Kong. (AP Photo)

Well, now we know part of what China meant with its threat of “grave consequences” for Canada over the arrest of Huawei CFO Meng Wanzhou on a U.S. warrant. On Tuesday China detained former Canadian diplomat Michael Kovrig, who worked on Prime Minister Justin Trudeau’s 2016 visit to China. The move appears to be in retaliation for Meng’s arrest. (Canadian Press)

As Guy Saint-Jacques, a former Canadian ambassador to China, told the Globe: “This is a demonstration of how nasty the Chinese can be, how brutal they can be. There will have to be lessons learned among our political masters about the type of people we are dealing with.” (Globe and Mail)

As of Tuesday the Federal government’s travel advisory website for China remained the same as it has for several years—travellers should “exercise a high degree of caution” due to “isolated acts of violence, including bombings and protests.” Ottawa is considering adding the risk of the government taking arbitrary retaliatory measures against Canadians in the country. Meanwhile, a B.C. Supreme Court judge released Meng on on $10-million bail (CTV News, Global News)

And as if this story needed more twists, President Donald Trump offered to intervene in the case to free Meng if China would agree to a trade deal, thereby affirming China’s assertion that the arrest was politically motivated, even if it wasn’t. In the process, he threw Canada under the bus, again. As Paul Wells noted on Twitter, “If Canada executed this arrest out of respect for the rule of law, now might be a good time to let her go. Because the rule of law just got cancelled by the President.” (Reuters, Twitter)

As Trump’s hallucinatory world heaves and crumbles, Americans ponder what kind of country they wish to live in—and what kind of people they want to be. From Allen Abel in Washington:

The great American cavalcade of liars and lawyers slithers into Courtroom 2. Just outside the chamber, high above us as we enter, there are red stains in the plaster, reminiscent of the scene in Tess of the d’Urbervilles in which Mrs. Brooks looks up to see “The oblong white ceiling, with this scarlet blot in the midst”—the oozing blood of the rapist whom the heroine has killed.

It is a Friday morning in the District of Columbia’s federal courthouse, one of those grandiose buildings where the Ten Commandments meet the Seven Deadly Sins. In this case, as in so many others in this town and in these times, the admonition not to bear false witness is grappling the tag-team of Pride and Greed, their latest battle in a rivalry that started east of Eden, long ago.

“Is this the trial of the century?” someone asks out loud as the black-robed judge arrives, and if it isn’t, it certainly is a chapter in the paramount criminal case of the century’s first fifth—the scandal that may, eventually, ensnare a seething president.  (Maclean’s)

Remember the Great Canadian ‘Boycott America’ movement of summer 2018? Now Canadians are boycotting each other. A movement is building in Alberta to boycott goods and services from Quebec, after Quebec Premier François Legault  said there’s “no social acceptability” for reviving the Energy East pipeline. What started with an angry tweet from  former Wildrose leader Brian Jean—”The Premier of Quebec said that ‘there is no social acceptability for oil in Quebec.’ Yet he has no problem taking the transfer payments funded by Alberta oil. Quebec gets around 60% of all equalization. It’s time to start boycotting Quebec products here in Alberta.”—spread on social media with Albertans swapping examples of Quebec brands to boycott. (Global News)

Asking “What if Alberta decided there was no ‘social acceptability’ for cheese curds and Cirque de Soleil?” the National Post looks at what an Alberta-Quebec boycott battle would entail. (National Post)

The Canada Border Services Agency wants to revive its reality TV show Border Security: Canada’s Front Line. You know, the one that was taken off the air in 2016 after Canada’s privacy watchdog found the CBSA violated the rights of a migrant worker during a raid. “They should give up their Hollywood dream and focus on doing their job,” says the head of the B.C. Civil Liberties Association.  (CBC News)

Long time no see: Disappearing-Liberal MP Nicola Di Iorio popped his head into the House of Commons after staying away for months, acknowledging that actually showing up on Parliament Hill is part of an MPs job, but instead he decided to “do something concrete” in his Montreal-area riding—raise awareness about the dangers of cannabis legalization. Well, that and hold down his other job as a lawyer. Di Iorio also used his wide-ranging return speech to discuss the historical mistreatment of Italian-Canadians during the Second World War. (Canadian Press)