Cabinet clout has little to do with the noun in the minister's title. What matters more are the priorities handed down in each minister's mandate. 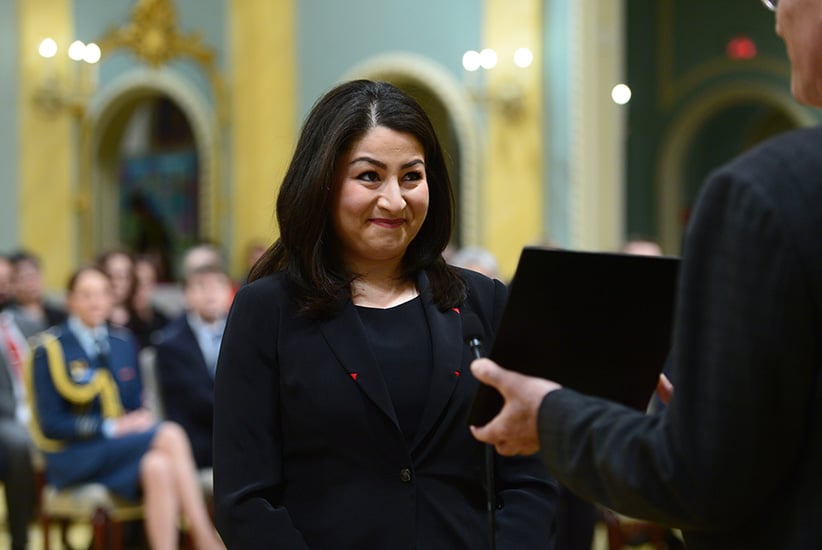 Maryam Monsef is sworn in as Minister of Status of Women during a ceremony at Rideau Hall in Ottawa on Tuesday, Jan 10, 2017. (Sean Kilpatrick/CP)

The debate over whether or not it’s fair to say Maryam Monsef was “demoted” when Prime Minister Justin Trudeau made her minister of status of women  earlier this week, removing her from the Democratic Institutions portfolio, is  largely missing the point.

The admittedly subjective business of assessing the relative importance of cabinet positions isn’t based on a judgment about the subject areas a minister is asked to work on. It would be absurd to try to weigh which matters more between the state of democracy and the status of women.

But that’s not what’s going on here. Anyone who watches government closely soon figures out which cabinet posts come with the most direct responsibility and authority. This does not remain constant, of course. For instance, Environment is an urgently important job in the Trudeau cabinet, but was a sleepy second-tier appointment in the late stages of Stephen Harper’s government.

RELATED: What you need to know about Trudeau’s cabinet shuffle

However, few would dispute in any era that Finance is reliably the most powerful federal cabinet post. Setting the budget makes the finance minister a force on every file. Is that because money matters more than, say, justice, or women, or, for that matter, democracy? Of course not. It’s an assessment of the role of the minister, not the resonance of the subject heading.

A handy way to compare the Democratic Institutions and Status of Women jobs is to look at the mandate letters Trudeau gave the ministers back when he appointed his first cabinet. I count seven specific priority tasks assigned to the democratic institutions minister. On five of them, the minister is clearly asked to take the lead—including big Liberal commitments like changing the way senators are appointed, and moving ahead on reforming the way MPs are elected. On two other priorities, the minister is told to support another minister, the president of the Treasury Board.

It’s quite a different picture when you look at the status of women minister’s mandate letter. Of seven top priorities listed, only two might be interpreted as files on which the minister is assigned the lead role—addressing gender-based violence and developing gender-based analysis of cabinet decisions. The other five priorities involve the minister supporting other ministers or agencies, like helping the public safety minister on gender-sensitive training for federal police, and the ministers of justice and Indigenous affairs on the inquiry into murdered and missing Indigenous women and girls.

Playing that sort of supporting role can no doubt be important, but it’s not the same as spearheading key policy initiatives. Moving from being the lead voice at the cabinet table on numerous high-profile files to mostly helping other ministers who have that level of responsibility sure looks like a demotion.