'We have to have change': Q&A with Perry Bellegarde

For the record, AFN National Chief Perry Bellegarde speaks about his hopes for a breaking point this election 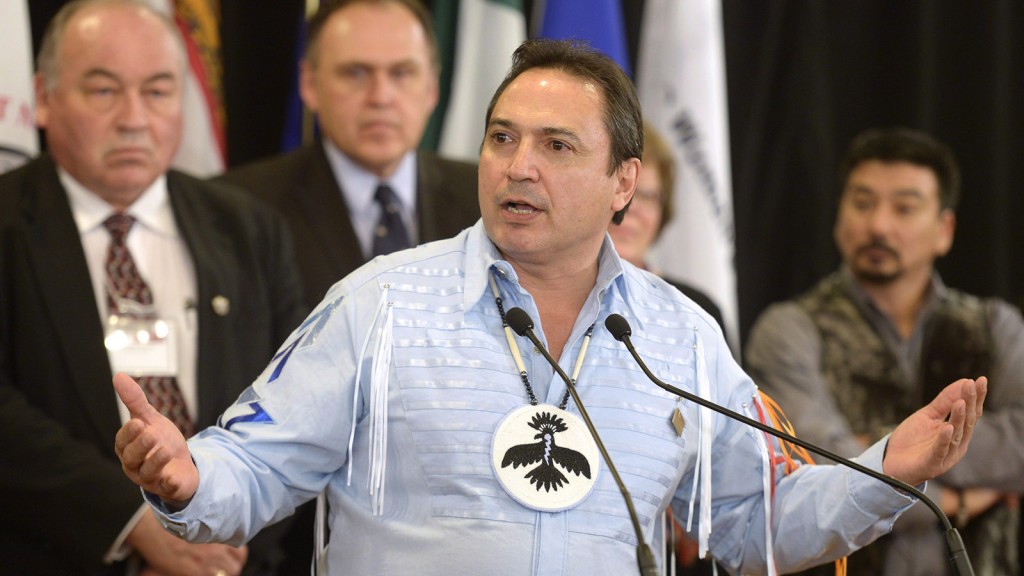 Earlier this week, Maclean’s reporter Scott Gilmore wrote a column asking why Canadians have been silent on Aboriginal issues during this election. After reading the column, Perry Bellegarde, National Chief of the Assembly of First Nations, spoke with Evan Solomon on his radio show, Everything is Political. A transcript of the interview follows. You can also listen to the audio here.

Evan Solomon: Last night we spoke to Scott Gilmore and (Mi’kmaw citizen) Pam Palmater about the missing issue in this campaign: First Nations, aboriginal issues—tragedy unfolding before our eyes as we talk about the niqab and all these other issues. Gilmore, in a very provocative column for Maclean’s, essentially said, “why aren’t we talking about the fact that so many First Nations children are going hungry, dying, assaulted?” Since the campaign dropped, he has a series of figures that are startling and shocking, in Maclean’s magazine.

Joining me now to talk about that and why – he originally told us on this program that 51 ridings could change by the First Nations aboriginal vote – National Chief Perry Bellegarde joins me now. National Chief, it’s great to have you back on the program.

Perry Bellegarde: Glad to be on again, Evan. How are you?

Solomon: I’m very good, I’m very good. When we last spoke, you were thinking about not voting. Things changed. Now you say you will vote. What changed your mind?

Bellegarde: Basically talking to our chiefs and our leadership back home and our elders – the ones I always listen to and get guidance from – and even the youth. I went back home and they said, “look, you’re trying to mobilize the vote, Chief Perry. It’s important that you show some leadership and exercise your personal sovereignty and vote.” And that’s why I listened to that advice and guidance, so I will be voting on Oct. 19. It’s too important an election not to bring about change. We have to have change.

Related: Q&A with Perry Bellegarde: ‘If we win, Canada will win’

Solomon: Yeah, you won’t say who you’re going to vote for, obviously. It’s a personal, private decision. It’s your own issue. Now, I don’t know if you read Scott Gilmore’s column. It’s got—

Solomon: About the statistics of, since the writ has dropped, what’s happened. And what he’s essentially saying is that we’re ignoring a tragedy that’s unfolding to fellow Canadians. And then the question is, why aren’t we paying attention? What do you say to that?

Bellegarde: He says, why aren’t we in the rest of the country paying attention to that?

Related: ‘It could have been me’: Harrowing stories of Indigenous women

Solomon: He says that we—here, I’ll read you an excerpt from this article. “The last 60 days have not been as fortunate. If it’s a typical eight weeks in Canada, 1,425 aboriginal kids dropped out of school, three times the national average,” as you say. “Since the campaign began, 45 aboriginal children died in infancy. They would’ve lived longer if they’d been born in Sri Lanka. 1,074 aboriginal children, 6,265 aboriginal women sexually assaulted since the writ was dropped. 33,500 violently victimized, 182 committed suicide, eight times the national rate.” The question is, National Chief, are we not talking about this because we’re numb to it? Are we not talking about it because there’s a racist issue here? Are we not talking about this because we just don’t care? What is it?

Bellegarde: A combination of all the above. Society still views First Nations in a very negative light in this country; you know, you still talk about First Nations issues and people don’t look at it in a very positive light. They still have their racial and negative stereotype about First Nations people, that they’re dumb, stupid, lazy, drunk on welfare, and they’re a burden to society. That’s the attitude, and that’s what persists right across Canada. That’s what has to be addressed. So even when we start talking about how do we change that, we start talking about reconciliation, we start talking about peaceful coexistence, you know if people would start getting, making room in their minds, hearts and spirits, you know, to get rid of those misconceptions and racial stereotypes, there might be more room for compassion and caring and understanding and validation of our languages and our peoples as people.

On getting out the vote

Solomon: Well what happened, voter turnout for First Nations – you and I keep speaking about this all the time – is low. You told me that you could target 51 ridings across this country. There’s a map of those 51 ridings. The question is, in two weeks, will the aboriginal vote flip any ridings? Can you get that vote out? Can you mobilize? What’s going to happen there?

Bellegarde: Well we’re hoping to get the vote out for sure. We have a couple of campaigns, Rock the Vote, you know, happening in Manitoba, Rock the Vote on the East Coast. You know, they’re using social media because we can influence those 51 ridings and decide who gets elected. Any future Member of Parliament, any future leader must be concerned about these issues we just talked about because it’s really in the best interest of Canada to close that gap that exists—

Solomon: I agree, but if they don’t pay an electoral price—

Solomon: Okay you’re trying, but if, can, this is why the key is – and you know – strategists are going to listen to you, National Chief, and they’re going to say, well he says that, but can he actually mobilize? If you can put 5,000 people in the get-out-the-vote, you know riding, man you’ve got influence, you can do whatever you want, people will listen to you.

Bellegarde: Well, the basic strategy is we’re leaving it up to a lot of chiefs in council, we’re basically using social media, and if we can get the number up from 40 per cent, which is what has been there in the past, higher than that, that’s movement. You know, we’re trying to get everybody lighted up about this election on Oct. 19 as best we can, but we’re going to need not only our people, but Canadians can do their part as well. Make these issues we’re talking about election issues as well. Because it’s in the best interest of this country to close the gap. You know, and I always constantly say this: it’s sixth versus 63rd. Canada is rated sixth according to United Nations human development index. Sixth. A common index, quality of life. You apply those same indices to our people, we’re 63rd.

Bellegarde: You know, even, so, even from an economic perspective, an economic viewpoint, it makes sense to invest in education and training and access to potable water and housing and proper healthcare because that means the gap will close—

Bellegarde: And that’s really in the best interest of this country, and that’s what this election should be about, looking at it from an economic perspective.

Bellegarde: Bill C-38 and Bill C-45, that was the catalyst for Idle No More. You know, when the government unanimously passed legislation that made it a lot easier for industry and everybody else to hurt the land and water, you know they lessened those regulatory frameworks that were there, you know that was the catalyst, so people seized upon that. And there was a movement, it was almost like a coming together of elders and youth and on-reserve, off-reserve people. It wasn’t only First Nations people at Idle No More, it was non-indigenous people as well, and so the fire is there. I’m saying it’s now Oct. 19, we’re not a passive people, we’re a peaceful people no question, but at some point there is going to be a breaking point. People don’t know, and I don’t know as National Chief, where that point is going to be. You know, we are a people, and we want to get the people out to vote, and that can be a positive thing, in terms of a positive constructive way—

Bellegarde: To bring about this—

Solomon: And a breaking point could come.

Bellegarde: Oh no, of course. Our young people expect and demand better. They’re not going to accept the status quo. They’re not going to accept communities where there are moldy schools, overcrowded schools. You know, our kids want the same thing as everybody else in Canada, a good decent education and a good decent place to live, and that really is not there now. We know all the negative statistics. We see them and hear them everyday.

Bellegarde: Of course I’ll come back and give an update. We’ve got a major gathering next Wednesday in Edmonton, you know, because there hasn’t been a lot of focus in these leaders debates, so we’re having our own AFN (Assembly of First Nations) forum next Wednesday in Edmonton. And Mr. Mulcair has agreed to come. We’re hoping that Mr. Trudeau will come, Mr. Harper will come. We’re trying to raise our issues into their consciences because it’s really in the best interest of society, of Canada as a whole to close that gap. We’re trying to get them to get that, but I’ll come on anytime you want.

Solomon: National Chief, Perry Bellegarde, who wants, by the way, a consortium debate with everybody. That debate is not going to happen. The last debate, the French language debate, which I know you’ll be watching closely, is on tonight. National Chief Perry Bellegarde, it is a pleasure to have you on everything as political. These are vital issues, I know you focus on them; we do too. Let’s keep this conversation going. Thanks for coming on, as always.

Bellegarde: Thanks for the opportunity, Evan. Take care.

Solomon: That is the National Chief of the AFN Perry Bellegarde.