MONCTON, N.B. — Stephen Harper should apologize for politicizing a Canadian hero, NDP Leader Tom Mulcair said Tuesday after the Terry Fox Foundation appeared to distance itself from a Conservative promise to help the charity if the party gets re-elected.

“We should not be allowed to politicize a Canadian hero like Terry Fox,” Mulcair said while in Moncton, N.B. 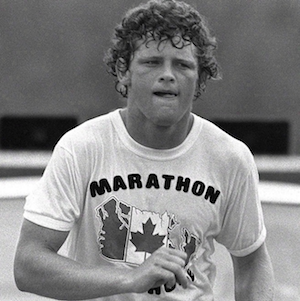 The Terry Fox Foundation issued a statement Monday stressing that it is non-partisan and it welcomes new investment commitments in cancer research from all political parties.

The organization’s comments came a day after Conservative James Moore and Harper’s wife, Laureen, announced that the Tories would commit up to $35 million to match donations raised during this year’s Terry Fox Run if they win the election.

“It would be nice if the other political parties would all double down on our commitment and stand with the legacy of Terry Fox and say regardless of what happens on Oct. 19 that they will recognize Terry Fox as a hero and will move forward,” said Moore, who is not running for re-election.

No one from Fox’s family attended the announcement. But Moore said they were aware of it.

“They’re enthusiastic and they think it’s great,” he said in Port Moody, B.C.

Mulcair said it is different for the federal government to be willing to match funds to help Syrian refugees, but the Conservatives crossed the line with their pledge for the Terry Fox Foundation.

“One is Canada’s role in the world and our ability to help the people who are suffering the most in the greatest refugee challenge since the Second World War,” he said.

“The other is a family that tries to keep alive the memory of a young man and doesn’t want one political party to dare try to bring that to themselves. That was the fundamental mistake that the Conservatives made and I think that Prime Minister Harper should simply be able to turn the page on that by apologizing clearly, although he has a lot of trouble doing that.”