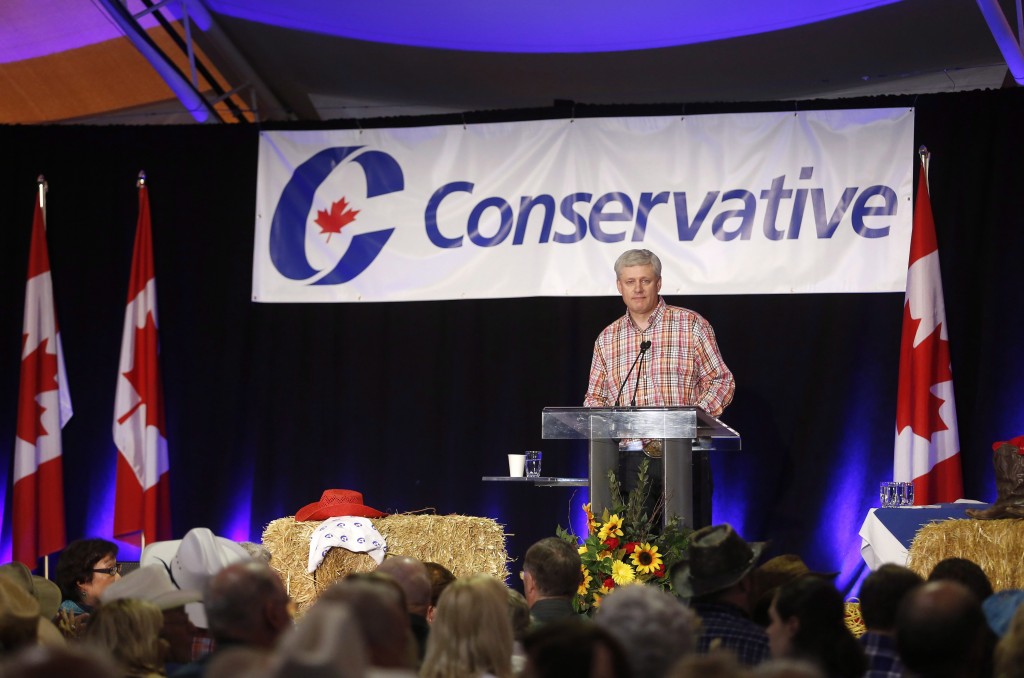 If you went strictly by Stephen Harper’s spoken record, he never resigned as Conservative leader after last fall’s election defeat, and he’s got no plans to do anything but carry out his full four-year term as MP for Calgary Heritage.

At October’s election-night event, he let a press release make his announcement about his party leadership rather than give those darn media the “I step down” soundbite. His people let word slip out before the Conservative convention in May he’d leave as MP this summer, but made zero mention of it at his convention speech. Nor did he confirm his plans to constituents Saturday while wearing red, orange and black plaid with dark jeans at his annual Stampede barbecue fundraiser at Heritage Park in his southwest Calgary riding.

After all, doing so risked overwhelming the headline he wanted to make at this event, one where as speechifying prime minister he normally avoided making big news. (For the first time in more than a decade, he came here without the PMO to distribute prepared text of the speech; Maclean’s transcribed the short oratory, below.) He endorsed Jason Kenney and his multistep bid to take over the Alberta PC party, merge it with the Wildrose, and stampede Rachel Notley’s NDP out of the provincial legislature’s government offices. “To hear those words from him in what is his last political speech as an MP is actually, for me personally, very touching,” Kenney told reporters, coming as close as anybody would to affirming this was an era-ending speech by the former prime minister.

Perhaps it was selfless of Harper: where he could have focused the spotlight on himself, he instead beamed it on his most trusted senior soldier in the conservative cause. In the place where Harper, Preston Manning and Kenney first cried “the West wants in” in the 1980s and 1990s, the small-government right itself needs to get back in. As if the 700-person crowd wasn’t already buzzing with excitement about Kenney’s new push already, Harper ensured it not only outshone what are likely his own final public words before officially entering private life, but also interim leader Rona Ambrose’s first speech to the Stampede crowd, as well as federal Conservatives’ own leadership contenders; Kellie Leitch, Michael Chong and Maxime Bernier were all at the BBQ as well, but darned if they could command much oxygen.

For the record, here is Stephen Harper’s (probably) final speech in his 16 years as MP:

Thanks to Kevin (Sorenson, Crowfoot MP) for those kind words earlier; thanks to all of you for welcoming Laureen and me back to this, the great city of Calgary. And I want to thank all of you for being here tonight, to support our local Conservative riding associations. Let’s begin by giving a big hand to these here organizers and volunteers to show that at heart, this city of Calgary remains true blue.

Folks, we’ve been coming together for this barbecue for over a decade now. And I know each and every one of us walks away at the end feeling more energized, more optimistic and more encouraged about the values we share as Conservatives. This event has always symbolized our commitment to those holding a true, united grassroots movement. Not a party kept afloat by union money, by donations, by media hype or by extensive taxpayer subsidies.

No, friends, we come together year after year to demonstrate that our Conservative Party represents the vision of Canada shared by the millions of regular Canadian families who work hard to contribute to this country and make it a success. And it has been fitting that we come together here in Alberta, because this province is the beating heart of the Canadian conservative movement.

And friends, if you bear with me, before I get to our special headline speaker tonight, I do want to spend a little moment on Alberta. Because friends, in Alberta, when we were uniting the party — the Conservative movement federally — a unity that allowed us to form the longest-serving Conservative government since John A. Macdonald, while we were doing that, friends, that unity, that Conservative unity, has remained elusive here in Alberta. And with terrible consequences.

Workers losing their jobs. Businesses closing their doors. Taxes skyrocketing. Families without prospects. That must change, my friends.

And friends, I would ask you tonight, I would ask all Alberta members of the Conservative Party of Canada to join me and to work to elect as the next leader of the PC party of Alberta, the Honourable Jason Kenney.

Now friends, less than a year from now, the Conservative Party of Canada will also elect a new leader, the person who will also be trusted with taking our Conservative vision to all Canadians. And there is of course a lot of work needed to be done before that happens, but I have to say that there is nobody who has taken on that task with more skill and success than our interim leader, the honourable Rona Ambrose.

In nearly 10 months since Rona took on the role of Leader of the Opposition, she has charted a clear course forward for our Conservative movement. She has dedicated her efforts to reaching across this country, to show Canadians there remains a party in Ottawa dedicated to the real concerns of hard-working Canadian families and Canadian workers.

There is a reason Rona carried wide and growing responsibilities during the period of our national government. Her approach is a model for what want in our elected officials: accountable to her constituents, honest about our challenges, and focused on common-sense solutions that respect Canadian taxpayers. Rona and the Conservative caucus have presented the most effective opposition this country has seen in decades.

And folks, I know she has a lot more to say about this so without further ado, I’m pleased to welcome to the stage here at the Calgary Stampede, le chef de l’opposition officielle, Leader of Her Majesty’s Loyal Opposition, Rona Ambrose.