The general becomes a politician 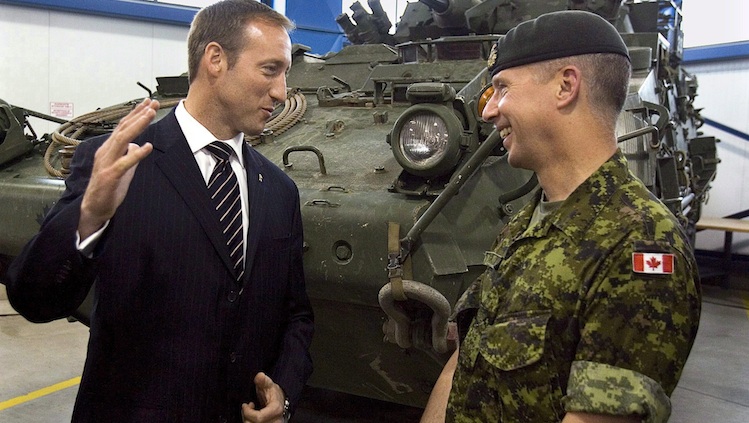 Do not feel bad for Andrew Leslie. At least don’t feel too bad.

There is, of course, nothing anonymous or forgiving about politics. At least not once you have declared yourself for a particular side or stepped forward and offered yourself up in some official capacity.

“I firmly believe this is the best country to raise a family in the world,” he said, after commending to us his wife, his three kids and his mother.

There were sentences now about his time in service to his country, about foreign lands and peacekeeping and war—”actual war,” he noted. There was an acknowledgement of the death and destruction that means and a note of thanks to all those of us who have rallied around our troops. He spoke of the floods and flames at home. He spoke about teamwork and dedicating oneself to the collective improvement.

“Like sometimes happens with individuals after jobs like the ones I had, I had conversations with several political parties on potential ways that I could best serve Canada. Last year I made my decision. I wanted to join a team motivated to serve Canadians through hope and hard work. I wanted a leader I could follow heart and soul,” he said, appearing to point directly at Mr. Trudeau. “I’m a Liberal.”

It is perhaps tempting to think of Andrew Leslie, decorated man of the military, retired lieutenant-general, as something other than a politician. But he is a politician. Whenever and however he came to be one, he is now. And he does not seem to be shrinking from it.

“Now, I don’t know if any of you noticed, but one of the other parties doesn’t seem to be taking the news so well.”

“But, you know what, after this last week, it was really them.”

The crowd laughed and cheered and stood to applaud.

“Who cares!” yelled a voice from the back.

In the past week, the retired general has had his judgement questioned. He has been attacked by a minister of the crown and accused of gross excess and entitlement. His personal real estate has been scrutinized. The terms of his daughter’s unemployment have been questioned.

Was the past week brutal? Was it unfair? Was it unseemly and unbecoming? Was it not quite a dignified exchange of thoughtful perspectives on the collective best interest? Sure.

On the other hand, there is something to be said for politics being something like the most difficult business (with all due respect to Mr. Leslie’s previous occupation). No one should attain public office without being tested and challenged and poked and prodded and made to answer for themselves. We should probably hope to avoid discouraging decent people from participating, but we should also not ever expect it to be easy.

“It’s been quite the week for my family and I,” he said. “The Conservatives were thoughtful enough to welcome me into political life with a 21-gun salute.”

“And, by the way, as a gunner, technically I could understand the organization skills and the sense of timing required to make this happen.”

The crowd laughed and cheered.

This was good theatre—a tease of the revelation leaked to the press beforehand, Mr. Leslie now stood on stage and joked and mocked. He was not quite a smooth speaker—he eschewed a teleprompter and thus relied on notes, his eyes, beneath that swoosh of hair atop his head, cast downward—but he was confident and agile.

“This was a partisan attack, designed to discourage others like me, or like you, from joining Justin’s team because certain people are frightened by the spirit of optimism and hard work and hope,” he said.

He appealed to the high road. This professional leader of men heaped praise on his party leader and ridiculed the government’s defence policy. When he was done, Mr. Trudeau bounded on stage and embraced him.

He was somewhat shakier a little while later in his appearance before the ravenous press, but he was also obviously willing to play coy. What precisely had gone on between him and the Conservative party? He couldn’t possibly say. Would he run as a Liberal candidate in the next election? Stay tuned.

And asked about the Defence Minister’s suggestion that Mr. Leslie had not been entirely forthcoming about his knowledge of the expense claim, the general did not quite demure.

“What the minister says, it’s entirely up to him,” Mr. Leslie offered. “I was a bit surprised to see him in on a weekend, in a building apparently he’s rarely in.”

Mr. Leslie would seem quite ready for Question Period.

Shortly thereafter he took his leave.

Mr. Leslie turned and smiled on his way out the door.