What four leaders said at the women's panel Up For Debate

Some quotes from Thomas Mulcair, Justin Trudeau, Elizabeth May and Gilles Duceppe in their panel discussion on women's issues 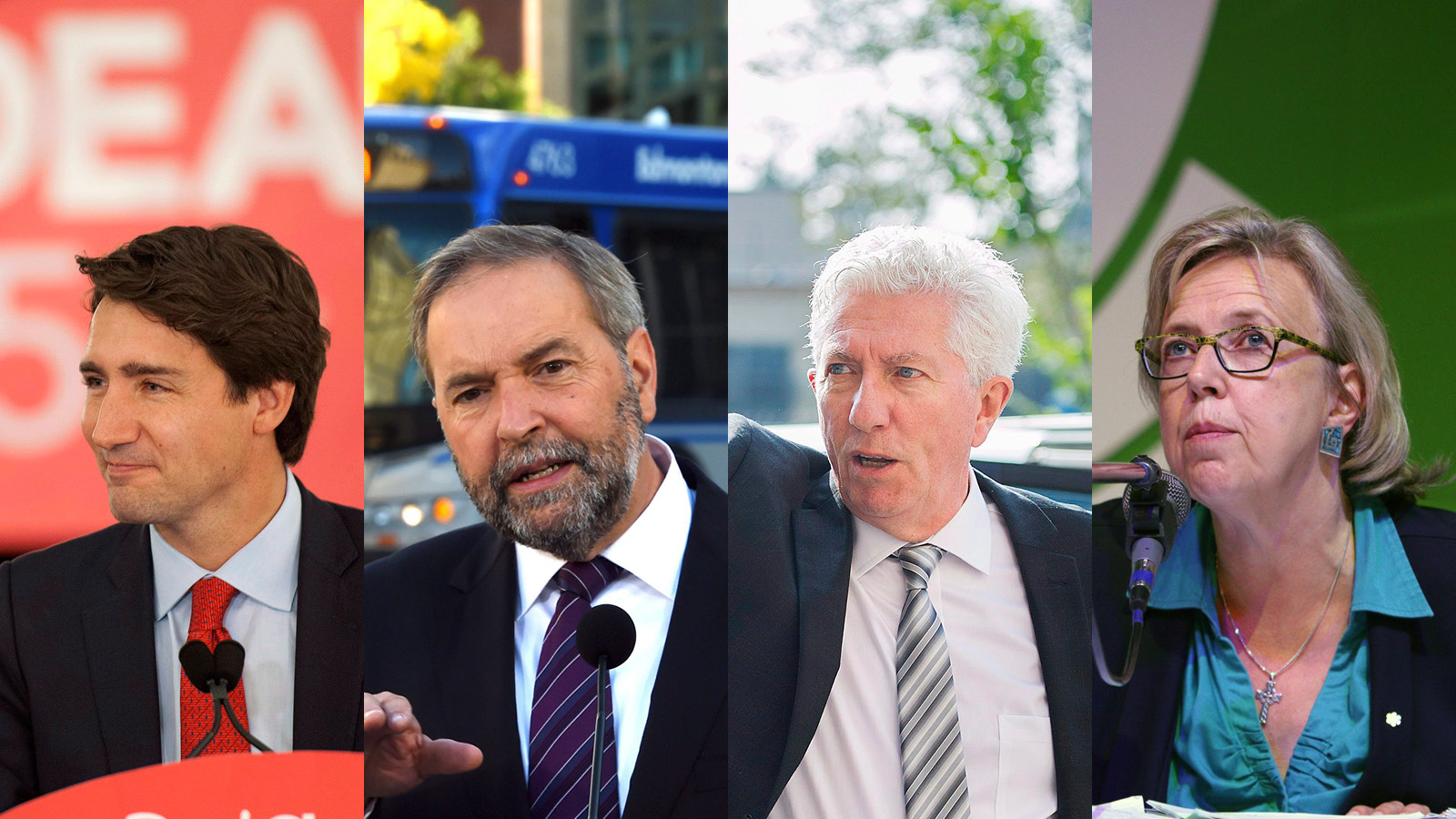 Four party leaders participated in Monday’s Up for Debate event about women’s issues. This is a partial transcript of some highlights of a Q&A session on violence against women and sexual harassment.

Elizabeth May, Green leader: “We need a national strategy to confront violence against women. It’s got to engage, particularly women’s organizations and those in sociology fields who are paying attention to this issue. We need to name it and shame it and be out there with a zero tolerance for violence against women. I mentioned early the urgent need for an inquiry into missing and murdered Indigenous women, but it’s a societal challenge that requires a very significant response.”

Justin Trudeau, Liberal leader:  “The issue with the infrastructure program we’re putting forward is we’re being a partner to municipalities and provinces. I don’t think it’s up to the federal government to draw lines on a map or to tell a municipality what it needs and where. Municipalities have serious needs to increase women’s shelters, provinces need a partner from the federal government and, with our historic investments that we’ve announced, we’re going to be able to partner and make sure that they happen.”

Related: Chatelaine‘s one-on-one interviews with Harper, Mulcair, Trudeau, and May

May: “I restarted the women’s caucus in Parliament, which is all women in the House and in the Senate, and we do meet, and we did confront the issue of the sexual harassment that was occurring in the House of Commons, and try to provide our own advice to the parliamentary committee that was coming up with terms of reference for that. When we went around the room, regardless of what party we were in, it won’t surprise anyone to know that we all said that, of course, we have confronted sexism, that we all knew ourselves or close friends who experienced violence, and that means the refusal to even talk about it, and I said: Let’s have public hearings and  bring the media in, and we can all say: Yes, we’ve experienced this, and we’re not going to take it anymore. We need to name that and make it unacceptable in our society.”

Tom Mulcair, NDP leader: “Parliament had rules (about sexual harassment) only with regard to employees and employers, but had no rules about the members of Parliament amongst themselves. Jean Crowder, our extraordinary member of Parliament from British Columbia, worked hard and there are now new rules in place.”

Trudeau: “And there is still tremendous stigma around sexual violence, as if it’s somehow the victim’s fault, and that’s something I’ve been dealing with for 20 years from my volunteer years at McGill. We need to make sure that we’re creating a society that is accepting and respectful and understands that violence against women is not just a women’s issue. It’s everyone’s issue and men have a very important role to play.”

Gilles Duceppe, Bloc Québécois leader: “How do you explain that, 50 years after women have been fighting for equality, have made great strides in many domains, but still remain that vulnerable to violence? How do you explain that? I don’t think there’s a rational explanation to that. . . . I mean, all religions are not very open to women, and it implies that it has effects on philosophy and, finally, on politics also. So I think we have to modify that and take also very concrete action to stop that. And it means adding progressist policies, not policies inspired by Margaret Thatcher, who was the one that Mr. Mulcair said he’s inspired by.”

Trudeau: “I don’t know exactly where to point my finger. There’s probably an awful lot of factors that come together to shape societal behaviours, whether it’s certain types of music, there’s a lot of misogyny in certain types of music.  There’s issues around pornography and its prevalence now and accessibility, which is something I’m really wrapping my head around as a father of kids who are approaching their teen years, and there’s also just the shift in parental roles, as well. There’s a lot of communities in which fathers are less present than they have been or might have been in the past. And there’s a need to have more engaged, positive role models.”

May: “If the federal government doesn’t play a role, if we don’t create a national program that actually invests in reducing the incidence of violence against women, then we’re failing ourselves and we’re failing our daughters.”