What happened between the PMO and Jody Wilson-Raybould? 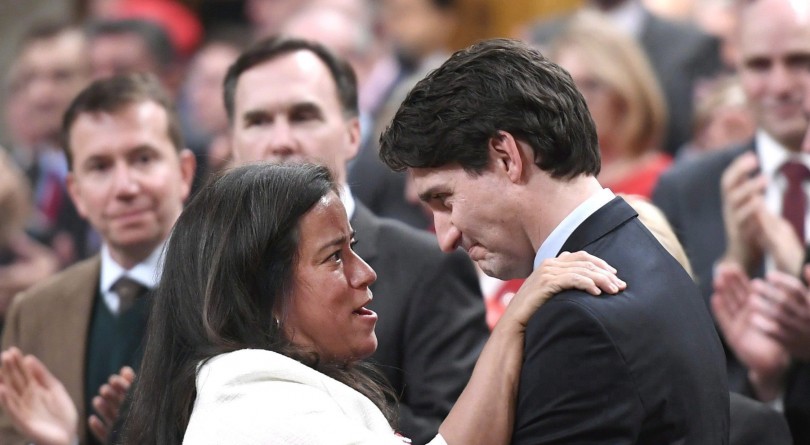 Prime Minister Justin Trudeau is embraced by Minister of Justice and Attorney General of Canada Jody Wilson-Raybould after delivering a speech on the recognition and implementation of Indigenous rights in in the House of Commons on Parliament Hill in Ottawa on Wednesday, Feb. 14, 2018. (Justin Tang/CP)

Under pressure: Did the Trudeau PMO try to push former Justice Minister Jody Wilson-Raybould to intervene in a criminal investigation involving SNC-Lavalin? That allegation, raised by a Globe and Mail, rocked Ottawa Thursday, triggering calls for an investigation.

The tl;dr allegation (but you really should read it if you haven’t): The PMO applied pressure on Wilson-Raybould to have prosecutors negotiate an agreement with Quebec engineering giant SNC-Lavalin that would allow it to avoid a fraud and corruption trial, but Wilson-Raybould, who was demoted last month, refused, angering both the PMO and SNC. Interestingly, Wilson-Raybould didn’t deny to the Globe she was pressured, but would only say she couldn’t comment because, “that is between me and the government as the government’s previous lawyer.” (Globe and Mail)

Prime Minister Justin Trudeau, repeating the same talking point over and over, denied he or anyone in the PMO had “directed” the attorney general in the SNC case, even as a reporter asked Trudeau to categorically deny there had been any influence whatsoever. (Globe and Mail video)

Later, on Power & Politics, Liberal MP Marco Mendicino expanded the government’s defence, saying the PMO “neither directed, nor pressured, nor influenced—insert whatever adjective you want” the attorney general. (CBC News)

As Paul Wells sees it, there is no other option here but for a commission on inquiry to be called to determine if indeed the PMO tried to influence a criminal investigation, “directly” or otherwise:

In the absence of public denials from Jody Wilson-Raybould and her officials that anything like what is alleged in the Globe story ever happened—and I would say, even if she now makes any such denials—this needs a commission of inquiry. This is the sort of thing that, if proven, properly destroys governments. (Maclean’s)

Here is some of other commentary and analysis about the blockbuster allegations:

New York Times whose latest dispatch — Thank God for Canada! Our boring neighbour is a moral leader of the free world — landed just hours before the SNC story blew up. (New York Times)

Leaking 101: The recent leaking of a draft health bill by the Ontario NDP was amateurish in the extreme, writes Stephen Maher. If it’s true that the NDP was so sloppy with the leaked document that Premier Doug Ford‘s staffers were able to find and fire the whistleblower, then someone, perhaps even Andrea Horwath herself, should apologize and resign. In the meantime, here’s how these things are supposed to work:

It looks like the Ontario NDP needlessly messed up this process by foolishly grandstanding when they could have handed the docs to a professional at one of the fine Queens Park news bureaus, and failed to do the elementary redaction that would have protected their source.

If a Canadian oppo researcher or journalist has ever messed up this badly, I don’t recall it.

Before you pull the trigger and release leaked documents, you are supposed to think carefully about how they might reveal the identity of the leaker, and discuss the risks with the leaker at tedious length. (Maclean’s)

Got a tip you want to share? You can securely reach Maclean’s here.