What if Canada and Mexico said no to renegotiating NAFTA?

A letter to Congress announcing NAFTA's renegotiation has disturbing implications. Could Canada and Mexico take a stand, together?

Canadians and Mexicans alike expected the mercantilist and protectionist tones of Donald Trump’s past rhetoric on trade, but instead, they were served a letter dubbed “diplomatic,” of all things.

But between the lines of the neighbourly improvements to customs matters, anti-corruption measures and the like, the letter hosted language that raises deep concerns for Canadians, Mexicans—and even Americans, for that matter.

First, the interpretation that Trump’s administration would abandon its mercantilist rhetoric was immediately proven false with the introduction of the goal of improving “competitive opportunities for exports of U.S. goods exports [sic] […] while addressing U.S. import sensitivities.”

Second, the objective “to level the playing field on tax treatment” suggests the adoption of import duties or border adjustment taxes, which would violate the United States’ NAFTA and World Trade Organization commitments.

Third, the letter indicated that the Trump administration would like to “establish rules that require government procurement to be conducted in a manner that is consistent with U.S. law and the administration’s policy on domestic procurement preferences.” In plainer terms, they believe “Buy American” provisions should also apply to Canadian and Mexican firms bidding on U.S. federal contracts, contrary to NAFTA’s existing provisions.

Fourth, Trump’s revised NAFTA would include a “safeguard mechanism to allow a temporary revocation of tariff preferences, if increased imports from NAFTA countries are a substantial cause of serious injury or threat of serious injury to the domestic industry.” This is protectionism through the back door. The mere threat of an industry being negatively affected by imports from Canada or Mexico under NAFTA would be sufficient for the U.S. government to impose tariffs on these imports. Presumably, the temporary nature of such “safeguard mechanism” could easily become permanent, since the injured industry could never be competitive in a free-trade environment.

Finally, the letter states that the Trump administration wishes to eliminate NAFTA’s chapter 19 on dispute settlement in antidumping and countervailing duty matters, which would prevent the Canadian or Mexican government from challenging through a well-established and legitimate dispute-settlement mechanism. The only recourse that Canada or Mexico would have in such a situation would be retaliatory duties of its own on U.S. imports. In other words, chapter 19’s removal can only mean one thing: trade wars. Where’s the diplomacy in that?

In spite of its tone, the Trump administration’s draft notification letter to Congress contains very disturbing language for Canada and Mexico. If the measures identified above were adopted, there would be much less free trade in NAFTA than there is now, notwithstanding progress that could be made in other areas.

And so Canada and Mexico might as well serve Trump his own tactic: refuse to negotiate in order to keep the current agreement as is, while they patiently wait for a more cooperative future U.S. administration. 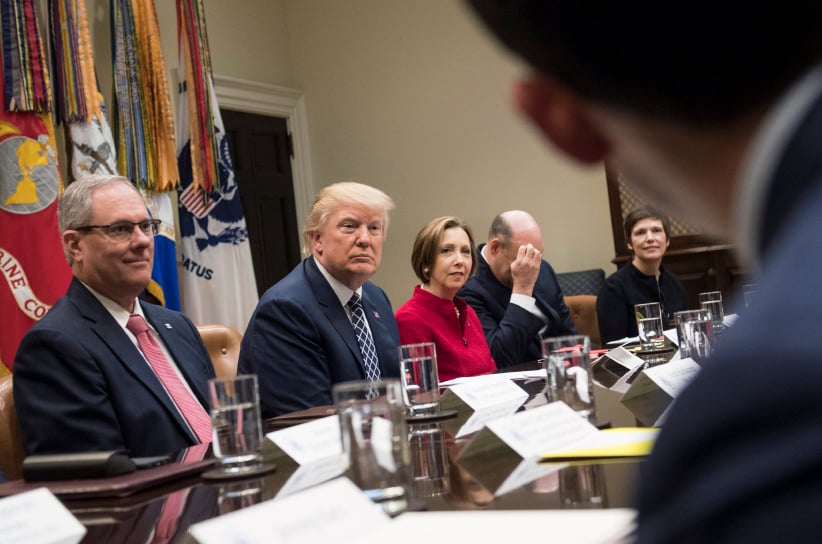 Donald Trump holds a National Economic Council listening session with the CEOs of small and community banks in the Roosevelt Room at the White House in Washington, D.C. on March 9, 2017. (Kevin Dietsch/UPI/Getty Images)

Canada and Mexico should, together, send a clear message to the Trump administration that the above-mentioned language is no basis for a NAFTA renegotiation: give up the protectionist measures and renegotiate or leave things as they are. Given his options, Trump might have no choice but to acquiesce and come to the negotiating table in good faith.

Canada and Mexico potentially refusing to come to the table isn’t an idle threat, either. Failing to renegotiate NAFTA would be politically costly for Trump, since he has vowed to get a better deal for Americans. This means that he is left with two options: renegotiate to really modernize and improve NAFTA, or pull the United States out of the agreement altogether.

If Trump chooses to act on his threat of taking the U.S. out of NAFTA, he will have a hard time convincing Congress to repeal the agreement. After all, 36 states have Canada as their largest export market, and four have Mexico as their biggest client. In addition, imports from Canada and Mexico play a big part in keeping the cost of essential consumer goods like cars and food cheaper for Americans. And the extensive engagement in Washington and across the U.S. by Canadian and Mexican government officials and business representatives in the last few months has only served to remind decision-makers in Congress and the states of NAFTA’s importance for their constituents.

Given the Obamacare debacle, Trump is looking for a win. If he drops his intention to insert protectionist provisions in a revised NAFTA and instead focuses on negotiating an agreement adapted to the 21st century North American economy, Trump could really claim to have gotten a better deal for Americans.

In the end, does Trump really want to end up on the wrong side of “the worst deal ever?”

Patrick Leblond is Senior Fellow at the Centre for International Governance Innovation and holds the CN – Paul M. Tellier Chair on Business and Public Policy in the Graduate School of Public and International Affairs at the University of Ottawa.