What is in the Leap Manifesto? 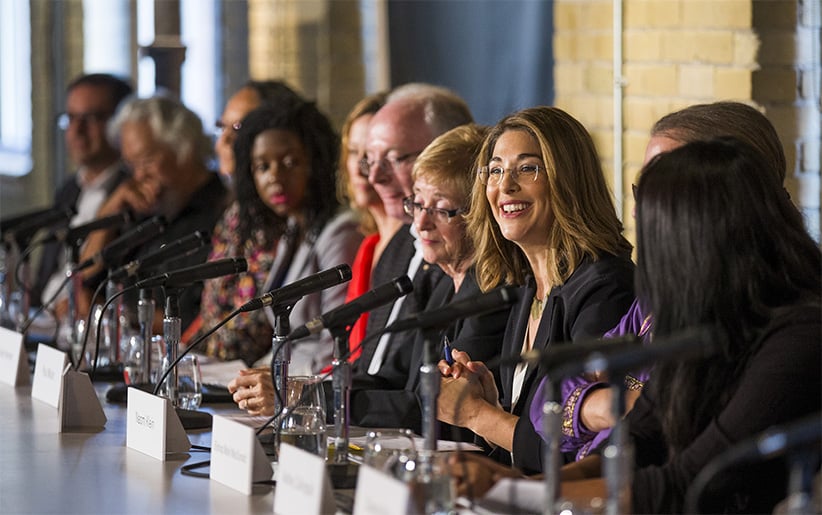 Author Naomi Klein (third right)  during a news conference to launch the Leap Manifesto: A Call for a Canada Based on Caring for the Earth and One Another  in Toronto, September 15, 2015.  (Mark Blinch, Reuters)

EDMONTON — The federal NDP adopted a motion Sunday to debate the ideas contained within a radical manifesto just ahead of Tom Mulcair’s critical leadership review.

Some 1,700 delegates at the NDP convention in Edmonton will decide later today whether Mulcair will stay or go and much rests on a speech he is set to deliver.

They must decide if Mulcair is the right frontman to revive the party from its low standing in the polls and help the NDP redefine itself after a serious setback in last fall’s election.

Support for the Leap Manifesto came after rousing addresses Saturday from Alberta Premier Rachel Notley and party elder Stephen Lewis that presented starkly divergent views on how the party should deal with climate change.

The manifesto, spearheaded by Lewis’ son, Avi, calls for an overhaul of the capitalist economy to wean the country quickly off fossil fuels. Among other things, it calls for no new pipelines, which Notley told delegates are crucial to revive Alberta’s resource-based economy.

To great applause, Notley told New Democrats they can stage a revival, pointing to her own experience leading the provincial party out of the doldrums and into power in a province few dared to predict would ever turn orange.

But she also pleaded with NDPers outside of Alberta to understand that thousands of families in her province depend on natural resources for their living, and need a pipeline and support for the oil and gas sector to maintain their quality of life _ even while working to improve the environment.

Lewis, to equally raucous applause, presented a different vision _ he stressed the importance of the discussion around the manifesto and suggested the dialogue could breathe life into the beleaguered party.

“Simply let the leap be the entry point to one of the great philosophic and pragmatic debates that engages democratic socialists in Canada,” he said, while also recognizing the tension that will exist with Mulcair’s leadership review.

The resolution passed by delegates endorsed the principles of the Leap Manifesto, enabling debate by grassroots New Democrats over the next two years on the policies that should flow from that.

Many New Democrats now find themselves struggling with the question of whether Mulcair can find a way to convey an impassioned message of his own — something many felt he failed to do during the course of the campaign.

“There was no coherent message, no optimism, no passion,” former MP Peggy Nash wrote last week in the Huffington Post.

Are enough members willing to give him a second chance?

The leadership review will take place after an intense morning. Delegates will first vote on a joint resolution calling for a debate on the policies that could flow from the leap manifesto. Then, Mulcair will make his final pitch before delegates vote mid-afternoon.

The joint resolution urges the NDP to recognize and support the leap document as a high-level statement of principles that speaks to the aspirations, history, and values of the party.

It also calls for specific policies in the manifesto to be debated and modified on their own merits and according to the needs of communities and all parts of the country.

NDP President Rebecca Blaikie has suggested Mulcair will need about 70 per cent support from delegates to stay on as leader, although the party’s constitution states that a leadership race only needs to be called if the leader receives less than 50 per cent.

Mulcair has refused to say what level of support would prompt him to resign.

Here’s what the manifesto calls for:

— Shift swiftly away from fossil fuels so that Canada gets 100 per cent of its electricity from renewable resources within 20 years and is entirely weaned off fossil fuels by 2050.

— No new infrastructure projects aimed at increasing extraction of non-renewable resources, including pipelines.

— “Energy democracy,” in which energy sources are collectively controlled by communities instead of “profit-gouging” private companies.

— An end to all trade deals “that interfere with our attempts to rebuild local economies, regulate corporations and stop damaging extractive projects.”

— Expand low-carbon sectors of the economy, such as caregiving, teaching, social work, the arts and public-interest media.

— Vigorous debate on the idea of introducing a universal guaranteed minimum income.

— Declare that “austerity — which has systematically attacked low-carbon sectors like education and health care while starving public transit and forcing reckless energy privatizations — is a fossilized form of thinking that has become a threat to life on earth.”