What our MPs are doing over the holidays

From fishing to singing in a family cover band, our federal politicians are looking forward to the holidays as much as we are 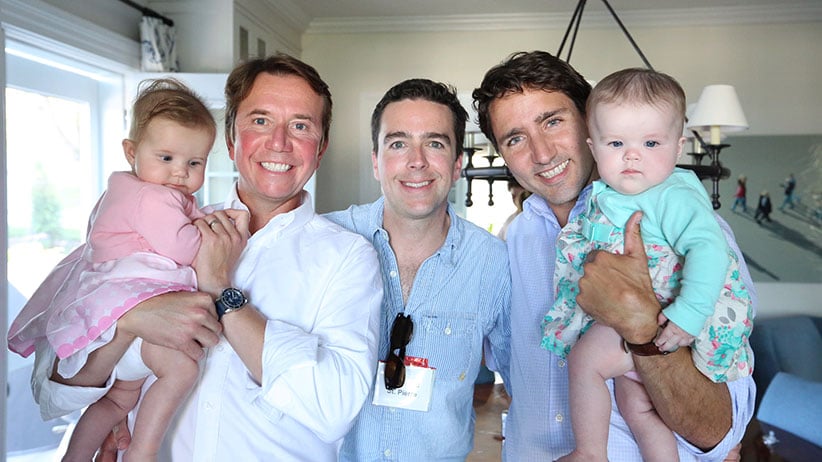 Liberal MP Scott Brison, left, and his husband, Maxime, centre, will celebrate their first Christmas with their twin daughters, Claire and Rose.

Parliament Hill is always an emotionally charged place, but it has been even more so in recent weeks after unprecedented allegations of sexual harassment and the October shootings that shook the entire country. So MPs say they’ll welcome the escape from politics this year more than usual.

During the long break—Dec. 12 was the last official day and the House of Commons resumes sitting on Jan. 26—some MPs seek the sun and sand. In past years, NDP MPs have flocked to Cuba, while Conservative MPs have favoured Florida. As usual, the Prime Minister’s family will go back to their home in Calgary, and Laureen Harper will cook for 24 guests, including family and neighbours.

For Liberal MP Scott Brison, it will be a special holiday. He and his husband, Maxime, will celebrate their first Christmas with their twin daughters, Claire and Rose, who will be 10 months old, three days before Christmas. Their house, which Brison built 20 years ago, is undergoing renovations to accommodate the twins, so the Nova Scotia MP for Kings-Hants and his family will be staying at the Flying Apron Inn & Cookery on the shores of the Minas Basin.

“It’s a wonderful inn [with] fantastic food. We’ll be about a five-minute drive from our house. We are going to spend Christmas with my 91-year-old father and other members of the family.” They’ll have a visit from Santa on Christmas Eve and watch Christmas classics with his dad, which is their tradition.

Every year, Brison gets a living tree—he’s had Korean fir, blue spruce and Serbian spruce—which he replants on his 24-hectare property.  “I keep them alive all winter. In the spring, as always, we’ll plant what will be the girls’ first Christmas tree.”

Nathan Cullen, the NDP MP for Skeena-Bulkley Valley, will also spend the break with his twins. “I’m headed to the northwest and some serious snow and food time,” he said of his home in Smithers, B.C. “Horse-drawn sleigh rides and friends, and likely as little politics as possible! My boys are four-and-a-half, love Santa and are learning how to skate. Who needs more?”

His colleague, Peggy Nash, the NDP MP for Parkdale-High Park in Toronto, is performing in The Nutcracker at a local high school, her third year in the show, and will volunteer at a community kitchen in her riding, she said. “My mom just passed away last month, so we’ll all be remembering her. Also, I intend to read Naomi Klein’s new book, preferably in front of the fireplace with a glass of eggnog or red wine.” 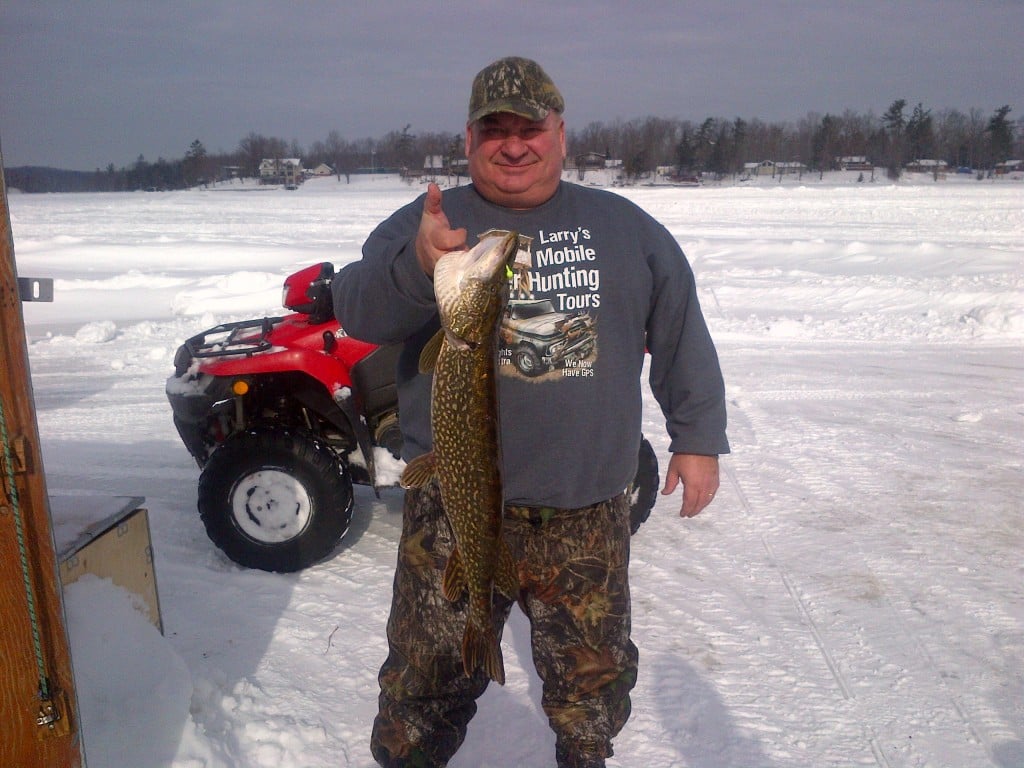 MP Larry Miller with an 8- or 9-pound pike he caught last year at Lake Moira, outside Madoc, Ontario.

For Ontario Conservative MP Larry Miller, an avid fisherman and hunter, the holidays are a chance to escape government business for the outdoors. This year, he and his wife, Darlene, are serving a perch he caught for their Christmas meal. The MP for Bruce-Grey-Owen Sound said his kids get sick of turkey. “They love fish and it’s something away from the traditional. Two years ago, they wanted prime rib, so I got a prime rib roast.”

He also plans on doing some ice fishing. Last winter, Miller went fishing on Lake Simcoe with Michael Chong, the Conservative MP for Wellington-Halton Hills. “I kidded Mike. He fell asleep on the bench in the fish hut. We’re all mentally tired when we leave that place. For Mike, it was just a day for him to relax. It didn’t matter to him if he had a line in the water and it didn’t matter to me. We both had a good time.”

Miller has also been ice fishing on Moira Lake with Daryl Kramp, the Conservative MP for Prince Edward-Hastings. “I caught a beautiful pike over there,” said Miller. “I’ll say we had a few refreshments while we were doing it—all legal, of course. I stay with it. I keep my line in the water and I actually had some pretty good luck. Everyone said, ‘Nobody catches fish here in the wintertime.’ It was eight or nine pounds. I was pretty happy. Daryl’s son-in-law cleaned it up and we ate it that night.”

Miller misses the annual deer-hunt season in November when the House of Commons is sitting (he and his four brothers own a hunt camp and 200 hectares on Manitoulin Island), so fishing is his form of stress relief.

“I find it relaxing. Sitting in a deer stand, too. It isn’t just about the kill; it’s the time in there. It’s quiet. The only thing you hear is a squirrel or a wild turkey. I call it my sanity time and fishing is the same for me. I find it so soothing to the mind.”

Kramp, who lives between Ottawa and Toronto, said he loves getting back to his home on the lake, which he describes as a winter wonderland for his seven grandchildren and the adults. “I plough off a bunch of rinks for the kids.” Kramp often entertains other MPs for Christmas cheer, sleepovers, snowmobile races, ice fishing and skating on the lake. 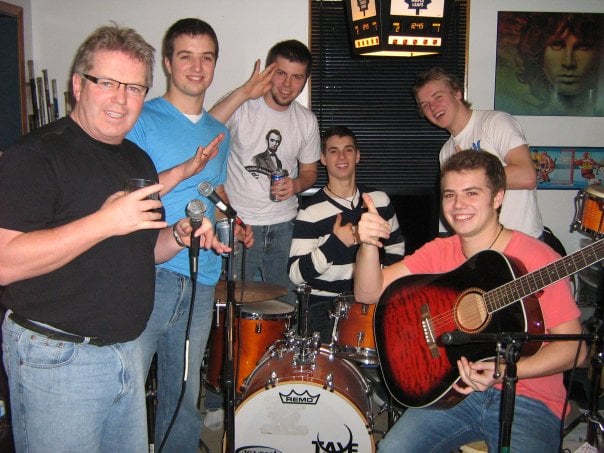 Liberal MP Rodger Cuzner will reconvene his family band, called Family Emergency, because his kids used that excuse to get home from school early one year.

After long days in Ottawa, the break is a chance to spend time with family, said Rodger Cuzner, the Liberal MP for Glace Bay, N.S. He has an annual hockey game on Boxing Day. “We’ve been doing it as long a I can remember—kids versus adults. Now, some kids have gone on to play major junior and university hockey. I think I’ll shave my chest in case they have to bring out the defibrillator!”

His wife, Lynn, was born on Christmas Eve and they host their three sons, aged 22 to 26. Every year, they set up guitars and drums in the family room and the immediate and extended family reunites to play in their band, called Family Emergency. “We suck,” he joked, adding that his one son is a musician but the rest are really bad. “We do terrible renditions of cover songs, everything from the Barenaked Ladies to Joel Plaskett.”

He said he’ll be busy with constituency work until Christmas Eve, but then, it’s all about relaxing, family and friends.