What the Saudi arms deal says about Trudeau's foreign policy

Trudeau made a big show of saying Canada is back, but what does that really mean? 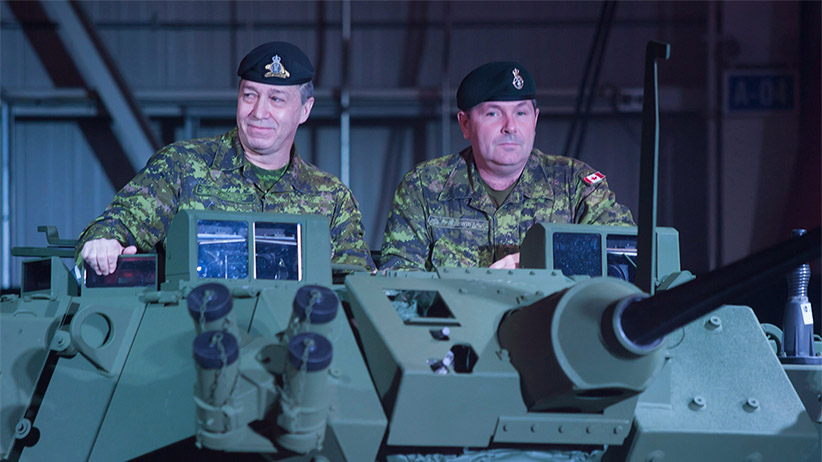 Two soldiers are shown in the new upgraded Light Armoured Vehicle as it’s unveiled at a news conference at a General Dynamics facility in London, Ont., on Thursday, January 24, 2012. Mark Spowart/CP

When beheading is a big part of your political brand, you might think you’re going have some problems warming yourself under the halo of Justin Trudeau’s sunny ways, but apparently not so much. After Saudi Arabia executed 47 people, including controversial Shia cleric Sheikh Nimr al-Nimr, Canada’s Foreign Affairs Minister Stéphane Dion shrugged off any questions that it would inhibit trade. Why stop the $15-billion sale of military equipment from General Dynamics Land systems to the Saudi’s over a few dozen decapitations?

Actually, Dion didn’t totally shrug it off. He first applied a bit of verbal varnish, condemning the executions, and then he did nothing. Of course, the message was somewhat mangled, a pattern that is already becoming alarmingly typical of Dion. He famously contradicted the minister of defence on the timeline for pulling out the CF-18s from the combat mission—Dion said it would be a matter of weeks, while Minister Harjit Sajjan has not set a date at all. I was wondering what Minister Freelance would do this time.

Dion’s director of communications first explained to the Globe that the government is not in the business of cancelling contracts from a “private company.” A good answer, but unfortunately, just not accurate. Call that a second coat of varnish. There actually are federal rules that bar arms sales to countries that might use them to harm the local population.

The next day Dion moved away from that line and said, in a series of interviews, that the contract was signed under the Harper government and that Liberals won’t change past deals. Third coat of varnish applied, but this one even thinner. Dion forgot for a moment the major Liberal election promise to cancel the F-35 purchase. Mind you, he did say new arms sales contracts will be reviewed in the future so… so, let’s wait and see.

In any case, most of Canada’s allies sell arms to Saudi Arabia, as Dion pointed out, and in the world of real olitik, where the Saudis are on the front line fighting our common enemy, ISIS, this is how the world works. That might be refreshing pragmatism, but it’s worth noting that, like the new government’s actions in the combat mission in Syria and Iraq, it still adheres exactly to the former Conservative line.

What is all this telling us so far about how the Liberal government will act on the world stage? Trudeau made a big show at the climate conference in Paris that “Canada is back,” but we still don’t know what that means. Probably the best way to find out is to get to know the guy whose job it is to define it, and that is Roland Paris, Trudeau’s chief adviser on foreign policy.

Paris is a highly regarded former associate professor at the University of Ottawa, known as a multilateralist who was openly critical of many of the Harper government’s actions. Paris decried the Conservatives’ Manichean view of the world, the black hats versus white hats. He believed the closing of the embassy in Iran was short-sighted and that the Harper government’s relationship with the Netanyahu government in Israel was too cozy. Back in March, before he became a Trudeau policy whisperer, Paris wrote an article that has been widely quoted in places like the National Post, that said: “Canada is not powerful enough to dictate to others, even if we wished to do so.”

If his language was a bit wimpy—Why shouldn’t a G8 country be able to dictate terms? If we can’t, who should?—it stressed his view that Canada ought to revert back to the Pearsonian vision as a black belt in mediation, a master of the dark arts of multilateral deal making. Paris argues that Canada’s influence must be as a power broker, not a power player, so we should avoid taking sides. There’s lots of debate about that—how effective is the UN as an international body and can Canada be a leader inside that world?—but it does help explain how the Liberal government wants to function on the world stage.

Unfortunately it also explains why Dion so blandly tried to separate an arms sale to Saudi Arabia from any larger foreign policy ideals. I assume Dion concluded Canada is just not powerful enough to dictate to the Saudis, or to General Dynamics Land Systems. Or maybe it’s a policy of constructive engagement. But whatever fancy terms you want to wrap it in, Canada is more than happy to sell arms to our pals, no matter how many heads they lop off.

Still, it’s worth pressing pause. Before we dismiss these first tentative foreign policy steps as a mixture of naïveté and optimism, those Harper-following, foreign policy realists and neo-cons have long had their day and frankly, they’ve done little except screw things up. Iraq remains a tragic mess, and its bastard child of a conflict, Syria, only gets worse. Libya was supposed to be the NATO triumph of direct action but it’s a failed state that is now a national-sized petri dish breeding extremism. Iran has become more powerful, not less. Shia-Sunni relations are worse, not better. And let’s not start on the Israeli-Palestinian conflict.

Realists and unilateralists love to justify all these quagmires by suggesting these are simply “intractable” conflicts. They argue they will take “generations” to solve because there is so much deeply rooted hatred and resentment. Too much blood has been spilled to expect any peace. Maybe so. But the Roland Paris multilateralist types believe in solutions, that these situations can actually be solved proactively. Rather than springing from a well of naïveté, this belief comes from hard-won experience and a much deeper pool of blood than we could ever imagine today.

It’s become a cliché to invoke the lessons of the Second World War but I think that’s a mistake. The Marshall plan and the long peace that has followed that war, the emergence of the European Union, and trade with Japan, are remarkable examples of vision triumphing over violence, of building over blood. They are concrete examples of people who had the audacity to ask citizens who just fought and died against an enemy, to then go help the former enemy rebuild. It was the greatest act of optimism in foreign policy history.

Over the holiday my kids were introduced to a man who survived the Auschwitz death camp. He rolled up his sleeve and showed my 11- and 12-year-olds his tattooed number. It is still a startling thing to see. I could see them suddenly look through the door of history and then walk through.

Suddenly the faraway stories from a different millennium were real, standing in front of my kids as a man. The past is not so far away after all. Our memories forget faster than the years are actually going by. But do my kids associate any connection to modern-day Germany? Of course not.

The same for Japan. The U.S. dropped two nuclear bombs on Japan, but cars and electronics are the fundamental association most of us have with Japan today. They could not be closer friends or allies.

Compare, if possible, the scale of tragedy from that time to this. The Holocaust alone is almost the equivalent in its horrific death toll of one 9/11 a day, continuously, for more than five years. It’s hard to imagine. But even harder to imagine is the peace that followed. The productive trade. The good will.

Gen. Marshall often spoke about the plan to rebuild Europe as a job for each country to figure out. His job was not to dictate the how, the individual methods, but to convince people of the why—why they ought to support the massive endeavour. As the great military planner later said about peace, it is not only a matter of military means, but of “spiritual regeneration to develop goodwill, faith and understanding among nations.”

Can you imagine a leader today talking about spiritual regeneration? But those are the words of an ultra-realist and ultra-multilateralist like George Marshall, the man who literally rebuilt the world. If the Trudeau government and the likes of Roland Paris don’t get too jaded, or too bogged down, or drift off into the self-justifying jargon of the status quo, maybe Canada does have a job on the international stage: to be the keeper of the why. Why peace is possible. Why we have to look beyond the violence. To have the audacity of optimism about settling conflicts.

That’s not a bad leadership role to have.