What to do when the boss has a dumb idea 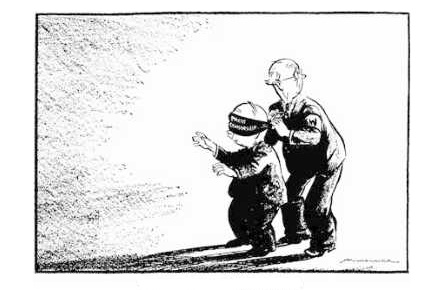 A few days before the 1995 Quebec secession referendum, the Montreal Gazette’s publisher, a wonderful man named Michael Goldbloom, took it into his head to run a front-page editorial in French explaining to the province’s majority why we were pretty sure No was the way to vote this thing. Several staffers sat around marvelling at this vision: a front-page editorial in the language we didn’t usually publish stuff in, signed by the boss of all of us. We huddled around a computer terminal, poring over his gentle, insistent argument.

There was a mistake in Michael’s French.

I forget what it was. Subject-verb agreement, or something similarly trivial. We sat around trying to figure out who would tell the big boss he needed to give his French a quick edit. “I’m not going to do it,” said one wide-eyed reporter. A few others voiced similar sentiments. Fix the boss’s French! Finally I said we were being silly. He’d be angrier if we ran this thing with the mistake than if we helped him fix it beforehand, and I was the guy who told Goldbloom he needed to add an ‘e’ to his adjective or whatever. Of course he fixed it immediately, thanked me offhandedly and didn’t think twice about it. But that instinct — the unwillingness to stand up to one’s employer, even if it might objectively do everyone some good — well, we’ve all seen that before.

And so we come to Jonathan Kay’s excellent column about the folly of the Canadian Museum for Human Rights. It’s possible to read it and still believe a human-rights museum in Winnipeg would be an excellent idea, but that’s not the likely conclusion. Your likely takeaway would be that this thing had White Elephant written on it from the start.

Anyway, there was about a second’s gap between the voice in my head saying, “Hey, Jon, good column” and the voice saying, “I notice you didn’t write this during the decade when people named Asper ran the paper.”

During the Asper decade, the National Post was the go-to paper for fun! upbeat! cheery! stories about what a fine idea the Asper Foundation-backed museum, brainchild of the late Izzy Asper, would be. On Feb. 16, 2005, for instance, readers found news of a poll saying a whopping 70% of Canadians wanted the federal government to contribute to the museum. And what exquisite timing! The last-ever budget of a Liberal government tottering on the brink and eager to please would have been mere weeks away.

I hasten to add that a quick Infomart search suggests Jon Kay didn’t write any of those happy-happy pieces, or anything else on the museum project before this year. He either thought it was dumb back then too, or thought nothing of it; either way he kept his counsel. But it’s a bit late now to point out that $100 million is a shaky investment of taxpayer funds. And the thought didn’t appear to occur to anyone when the Post was running news stories declaring the boss’s museum a national priority.

I don’t want to be too cheaply smug and morally superior here, because if I did, I would be Norman Spector, and that thought is simply unbearable. Of course employees are reluctant to displease employers. Employers can fire your ass. Worse, they can keep you around and let you twist while your career goes nowhere. Spector, who’s been really good at criticizing former employers long after he left their employ, would know something about all this. But I digress.

Early in the Aspers’ stewardship of the Post, David Asper wrote a column asserting that the Post’s coverage of the so-called Shawinigate affair was mean and unfair to poor Jean Chrétien. Ken Whyte wrote an editorial saying, No it’s not. Not very long after that, Asper fired Whyte and replaced him with a perfect non-entity. I had the luxury of quitting that gong show and coming here. Too many of my friends didn’t. They had to draw the logical conclusion: the bosses really liked a free hand, and they would not be cool in dealing with uppity help.

This tension between employers’ ego and employees’ instinct for self-preservation exists everywhere. There are workplaces where it’s relatively undramatic. If a waiter thinks the chef-owner makes a lousy flan, he can simply recommend the profiteroles and shut up about the flan. At news organizations it’s more dramatic. Did a bunch of Maclean’s bloggers defend Rogers’ right to employ usage-based billing last year because Rogers owns Maclean’s? I really doubt it. I’m pretty sure Andrew Coyne says what he thinks. But we should not have been surprised that so many of our readers viewed these stances on this policy question as self-interested. I kept shut about the whole thing, telecomms billing not being one of my areas of interest, and was pleased not to have to choose between upsetting the bosses and looking like their lackey.

Anyway, examples abound. Find a few of your own! My point is that humans write these stories and humans’ motives are sometimes mixed. Do read Jonathan Kay’s very good column.