What to watch for as Trudeau heads to the G20 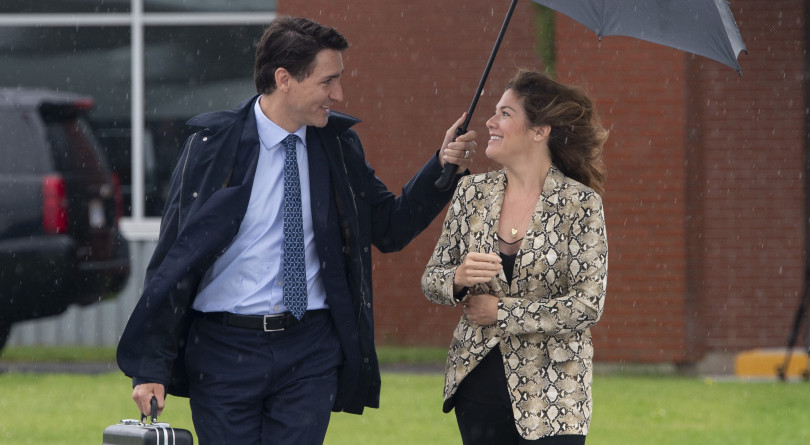 Canadian Prime Minister Justin Trudeau holds the umbrella over his wife Sophie Gregoire Trudeau as they make their way to board the government plane as they depart for the G20 in Japan, on Wednesday June 26, 2019 in Ottawa. (Adrian Wyld/CP)

Happy retirement: A month after Federal prosecutors dropped breach of trust charges against Vice-Admiral Mark Norman, saying there was no reasonable hope of conviction, Norman is leaving the Canadian military after signing a “mutually acceptable agreement” with Ottawa. “After consulting with his family, his chain of command, and his counsel, Vice-Admiral Norman has decided to retire from the Canadian Armed Forces,” the Defence Department said in a statement. Norman had been second-in-command but was suspended and accused of leaking government secrets related to a $700-million shipbuilding project. His defence team said the case was politically motivated after Prime Minister Justin Trudeau twice made public statements predicting Norman would be charged. (Canadian Press)

Mystery meats: China said it took the step of banning Canadian beef and pork on Tuesday after forged veterinary certificates were uncovered. In response Canada launched a probe into the counterfeit documents Wednesday, with Trade Diversification Minister Jim Carr alluding to tampering. “Somebody is trying to use the Canadian brand to move product into the Chinese market,” said Carr. “We’re taking it seriously and working very hard to get to the bottom of it. We want to know why this is happening, in whose interest this could be, and working with all of our partners to get an answer as fast as possible.” (Toronto Star)

Mystery meets: Trudeau arrives in Japan for the G20 summit with high hopes that diplomacy can smooth over relations with Beijing, but he’ll be depending on others, in particular the world’s least diplomatic leader, to convey that message for Canada. Since Trudeau is unlikely to get a one-on-one meeting with Chinese President Xi Jinping, aside from cornering him in a hallway, his next best bet is a face-to-face between Xi and Donald Trump. The President has promised to bring up the case of detained Canadians Michael Kovrig and Michael Spavor. But experts will also be watching to see who else Xi wags chins with. As Rohinton Medhora, the president of the Centre for International Governance Innovation told Global News: “Beyond the Trump bilat [bilateral meeting], how many other bilats does he grant? If it turns out that he has very few others, then I wouldn’t read that much into it. On the other hand, if he has half a dozen and Canada isn’t one of them, then I would read something into that.” (Global News)

And don’t come back: The Royal Canadian Legion said an extremist group that held an event at its Redvers, Sask. branch will not be allowed to return. “We contacted the branch and put an end to it,” a Legion spokesperson said. “It violates our anti-hate policy. They simply just didn’t know who these guys were. When they found out, started listening to what these guys talk about, they didn’t want them there anymore.” The group, which calls itself the Canadian National Party, says it is close to collecting  enough names to register itself with Elections Canada as an official party for the next election—and while there’s nothing Elections Canada can do to stop them, some want that to change. (Maclean’s)

Outlawed: Two international neo-Nazi groups with a presence in Canada have been added to the country’s list of outlawed terrorist organizations. “Small toxic segments of society continue to peddle vile, hateful intolerance,” said Public Safety Minister Ralph Goodale after adding Blood & Honour and Combat 18. Three groups with ties to the Iranian regime were also added to the list. (CBC News)

Tweet transparency: Twitter will create a registry of all political ads that run on the platform during the upcoming election, which puts it in line with new federal election rules. But it won’t accept any political ads during the pre-writ period, which starts June 30 and lasts until the official campaign begins. (Canadian Press)

The women in the Big Blue Tent: The Conservatives are running more women candidates in the upcoming election than ever before, and as Marie-Danielle Smith writes for Postmedia, hopefuls like 27-year-old Claire Rattée, a tattooed hairstylist from Kitimat, are leading the charge:

As the parties switch to campaign mode in anticipation of an October election, the Liberals are expected to try to frame their rivals — whom they lag in the polls — as a party of intolerance that is old, male and out of touch. The candidacies of Rattée and others like her, however, represent the party’s effort to put forward a younger and more female face.

Rattée served a term as a Kitimat municipal councillor after moving to the region from Vancouver at age 19, is running in a riding where longtime NDP incumbent Nathan Cullen’s decision not to seek re-election this fall has created a big political vacuum. She thinks she can win on a promise to encourage resource development and support for the LNG Canada project, which would bring liquid natural gas to port in Kitimat. (Postmedia)