What Tom Mulcair has to prove in the Munk debate 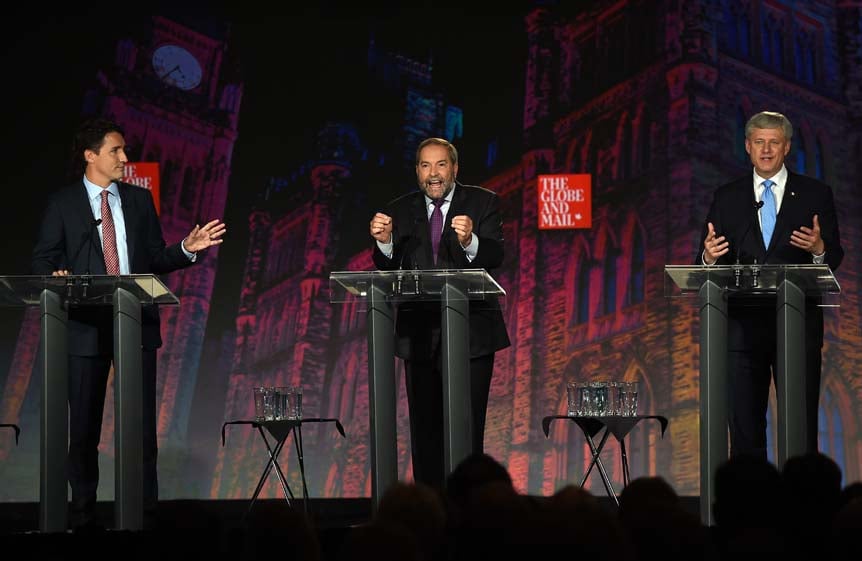 TORONTO — Projecting an air of statesman-like competency will be among the key tasks for New Democrat Leader Tom Mulcair as he seeks to win over voters and separate himself from his rivals during tonight’s first-ever Canadian election debate devoted to foreign policy.

The wide-ranging debate will delve into several touchy topics, such as Canada’s military role in the Middle East, immigration and refugee policy, climate change, and the country’s international image.

Brad Lavigne, a senior NDP campaign adviser, said in an interview that many Canadians feel the country’s international reputation has suffered under the Conservative government led by Stephen Harper.

Related: What Stephen Harper has to prove in the Munk Debate

“Mr. Mulcair will be wanting to tap into that unease that many Canadians have with Mr. Harper’s record,” Lavigne said.

The NDP leader is expected to lay out a vision that welcomes a multilateral approach to global problems and a strong role for the United Nations, observers said.

John Trent, a senior fellow with the Centre on Governance at the University of Ottawa, said Mulcair will likely propose Canada return to a “more traditional” foreign policy posture.

“That is to say: co-operation rather than belligerence, working with international institutions and organizations, negotiations, diplomacy,” Trent said.

Two of the most contentious issues are likely to be Canada’s military role in fighting Islamic extremists in Syria and Iraq, and the refugee crisis.

Mulcair has been adamant he would end Canada’s military mission in the region and allow more refugees to find a haven in this country.

Harper has been especially vocal in attacking his rivals on the topics, suggesting they are either weak on fighting terrorism or would compromise Canada’s security.

Former Canadian ambassador Ferry de Kerckhove said Mulcair will have to try to rekindle the faith of Canadians in immigration and their trust in the security system.

“One of the sad results of the Harper approach to immigration is that it has turned public opinion against increased taking in refugees because he has hyped up so much the security,” said de Kerckhove, a senior fellow with the Graduate School of Public and International Affairs at the University of Ottawa.

Related: What Justin Trudeau has to prove in the Munk Debate

“Mulcair has to not just say there is not a security issue, because there is one, but say that he is committing to both increasing the number of refugees and ensuring proper security (checking) is done.”

Activists are expected to gather outside the debate to demand an overhaul of Canadian immigration policies. They are also expected to press for an end to the wars and what they call the destructive environmental and economic policies that are forcing people to flee their homes.

Lavigne said debate viewers may not necessarily care about the finer policy points of international diplomacy, but said they will be looking to see whether Mulcair or Trudeau is ready to take on the role of speaking for Canada.

“Foreign affairs and Canada on the world stage does represent a proxy for leadership and capabilities to be prime minister,” Lavigne said.

“Which of the two Opposition leaders on the stage can you see fulfilling Canada’s obligations?”

Mulcair is expected to hammer home his experience as Quebec’s environment minister when it comes to issues such as climate change, an area where he can put distance between himself and both Harper and Liberal Leader Justin Trudeau.