What Trudeau learned from watching 'The West Wing'

On a podcast about the show, the prime minister explained how it influenced his career, and why he's okay with comparisons to Sam Seaborn 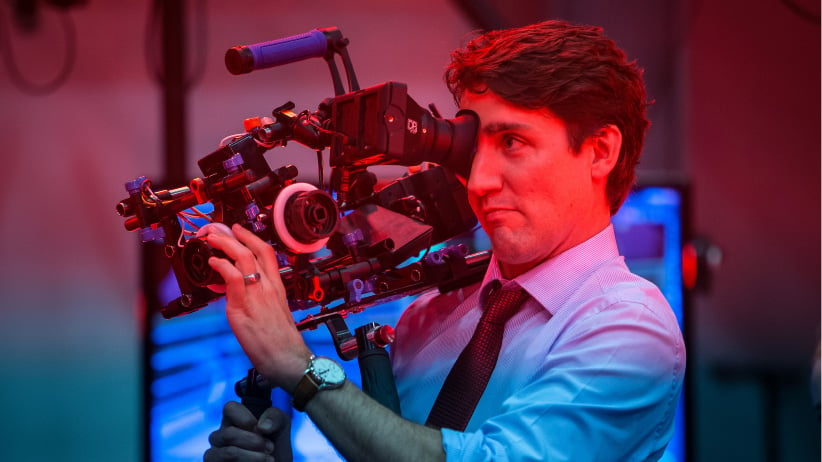 Justin Trudeau poses a challenge for American and British journalists trying to tell their home audiences about him. The time-honoured way of approaching Canadian stories from outside is to touch on politeness, moderation, snow—and then move along. But Trudeau is too conspicuously good-looking, his political persona too undeniably fascinating, for those clichés to be sufficient.

If non-Canadians see the Prime Minister that way, no harm done. It would be more problematic, though, if Trudeau and his team lapsed into thinking of themselves as some sort of hit show. This struck me particularly last year at a Liberal convention in Winnipeg, where videos and speeches portrayed Trudeau’s inner circle in a way I thought unmistakably echoed The West Wing’s ensemble of idealistic, driven, young political staffers.

And so the Prime Minister’s interview this morning on a U.S. podcast called The West Wing Weekly promised to be more than a novelty. Not surprisingly, Trudeau confirmed that the hour-long NBC drama, which aired from 1999-2006, was a formative influence, back when he and his future top aides were dreaming up political careers. Even more intriguingly, his musings on the podcast about the similarities and differences between his prime-ministership and the fictional U.S. administration of President Jed Bartlet provided several flashes of insight.

The podcast is co-hosted by musician and composer Hrishi Hirway, who describes himself as also being “a political news junkie,” and actor Joshua Malina, who played a political staffer on The West Wing. Hirway explained how Trudeau came to be their guest. It started last year when he called Trudeau “the real-life Sam Seaborn,” a reference to the West Wing character played by Rob Lowe, in the particular sense that both “can really wear a tuxedo.”

That comment drew the attention of Trudeau’s chief of staff Katie Telford, a big West Wing fan, and Hirway began prodding her to make Trudeau available. Agreeing might have seemed like a low-risk proposition, a nostalgic nod to a cherished cultural touchstone. In its day, The West Wing presented a consistently inspiring view of Democratic politics, depicting the machinations of speechwriters and spinners and strategists as the essential undergirding for a brilliant, principled president.

It aired when Trudeau and the men and women who would become his core coterie—very young then and still pretty young now—needed a way to imagine themselves in politics. “We’re all of the same generation. We all watched The West Wing,” Trudeau told Hirway and Malina. “We were all in a certain sense coloured by having watched The West Wing while we were thinking about how we wanted to have an impact on the world in our lives.”

But Trudeau was careful not to identify uncritically with The West Wing. After all, the show reveled in the shadowy manoeuverings of staffers, not the sunshiny side of politics he likes to talk up. So Trudeau made a point of saying the “big difference” between the show and his daily work is that he needs to stay “connected with regular people, having real conversations, and not getting wrapped up or even glorifying the insider nature of the political universe.”

A smart distinction to draw. Still, he wasn’t dismissing the show’s depictions as fantasy. “A lot of the interplay—from campaigning, to machinery of government, to the political lens you put on things—is very, very real and [a] very reasonable facsimile of what we’re doing,” he said. Real enough, in fact, that Trudeau said he watched an old episode in which Bartlet skewers his Republican rival in a TV debate as preparation for his own campaign debate performance.

Trudeau named Martin Sheen’s Bartlet as his favourite West Wing character, but said his own style is more about interacting directly with people. That rings true: Trudeau is outgoing and instinctive; Bartlet was reserved and cerebral. When Hirway raised another possible identification, mentioning how he had earlier dubbed Trudeau “the real-life Sam Seaborn”—Lowe’s tuxedo-rocking character—I expected the PM to try to deflect.

But Trudeau took the Seaborn point quite seriously. He picked up on how the character was depicted as an extraordinarily gifted speechwriter. So when Hirway asked if he’s okay with the comparison, Trudeau said, “Yes, on the side of the importance of communication and language, understanding how to use language as a way of telling the stories that drive us, reminding us of who we are and where we want to go.”

He kept going: “When you talk in policy, or you talk in numbers, you sound good but you don’t connect. The stories we tell about who we are, where we’re going, it happens in narrative form. I’m trying to uplift, represent and tell the story of Canadians in a way that resonates around the world. And that focus on storytelling is why I’m fine with the comparison.”

If Trudeau had emphasized, let’s say, any of the earnest policy debates that featured so often on The West Wing, or made too much of the show’s ideological bent, he might have sounded silly. But if there’s one thing about The West Wing that’s worth remembering—as Sam would grasp and Trudeau evidently does—it’s how hungrily audiences responded to its inspiring, though often implausible, plot lines.

Trudeau’s most important trait as a political leader might just be his constant alertness to how voters crave stories that make them feel good about politics. And part of the way he came to recognize that appetite for uplift, it seems, was by watching a prime-time TV show whose last episode aired the year before he launched his political career.