What Trudeau said about Jody Wilson-Raybould: 'It was her responsibility to come forward'

Here's what the PM said about her exit, whether she should be able to talk freely, if MPs should delve into it all, and First Nations leaders' concerns 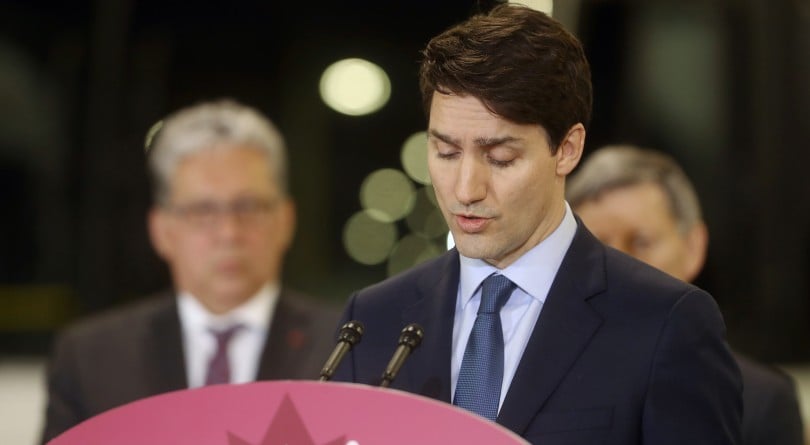 Trudeau speaks during a transit infrastructure announcement in Winnipeg on Tuesday, Feb. 12, 2019. (THE CANADIAN PRESS/Trevor Hagan)

Prime Minister Justin Trudeau answered reporters’ questions this afternoon in Winnipeg about Jody Wilson-Raybould’s resignation from cabinet. Wilson-Raybould quit the veterans’ affairs portfolio, but of course the real controversy goes back to her period as justice minister and attorney general, before Trudeau shunted her out of that role in a surprise move early this year.

Reporting in the Globe and Mail suggests that her refusal to bend to pressure from the Prime Minister’s Office and apply a new law to benefit SNC-Lavalin—the Montreal-based engineering company that is otherwise facing criminal prosecution stemming from a bribery case in Libya—was behind Trudeau’s decision to demote her. He denies it. Here are Trudeau’s key answers from that Winnipeg news conference today:

His core argument is that Wilson-Raybould should have complained to him long before it got to the point where she decided to quit cabinet:

“I am surprised and disappointed and to be honest don’t entirely understand why Jody Wilson-Raybould made the decision that she did. Because if anyone, particularly the attorney general, felt that we were not doing our job fully, responsibly and according to all the rules, as a government, it was her responsibility to come forward to me this past fall and highlight that directly to me. She did not. Nobody did. And that’s why I continue to be puzzled and disappointed by her decision to step down from cabinet.”

He’s not persuaded, at least not yet, by expert legal opinion that he faces no real obstacle to waiving solicitor-client privilege to let Wilson-Raybould speak openly:

“Indeed, I’ve heard those calls and I take them very seriously. I’ve asked our current minister of justice and attorney general to make recommendations to me on the question of solicitor-client privilege. I will highlight however that there’s a real danger, and it’s been flagged for me, of unintended consequences, particularly because there are two court cases ongoing directly related to this matter that could be impacted by such a decision we might make.”

He wouldn’t comment on whether the House justice committee, with its majority of Liberal MPs, should take up study of the Wilson-Raybould affair  when it meets on Wednesday:

“I’m not going to get ahead of the determination that members of the parliamentary committee make. It is a well established principle in our democracy that committees of parliamentarians are independent in the decisions they make. I look forward to seeing the deliberations that parliamentarians will make about how to proceed on this.”

Asked about First Nations leaders who are concerned about the exit from cabinet of by far the government’s most prominent Indigenous politician, he generalized about public questions—and even his own—about what’s happened:

“Many Canadians, including Indigenous Canadians, rightfully have questions, and that’s why we are working hard on answering them, as I am doing today, highlighting that for folks who are puzzled by Ms. Wilson-Raybould’s decision to step down, they can add me to the list, because I am surprised and disappointed.”