The 1995 referendum: What would have come after a Yes 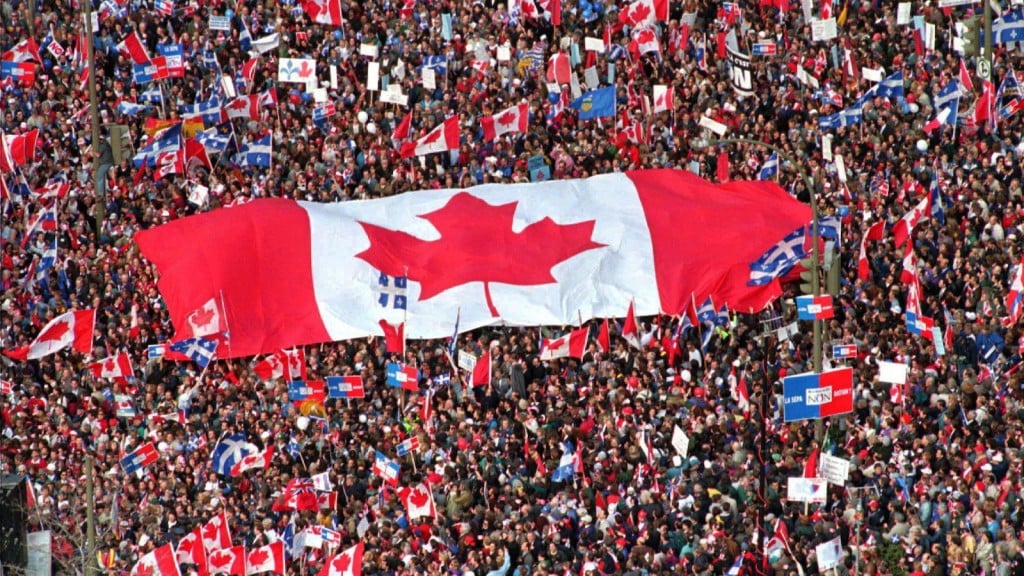 A team of Saskatchewan officials worked quietly to develop contingency plans in the event of a Yes vote in the 1995 Quebec referendum — options that included Saskatchewan following Quebec out of Canada, a new book reveals.

Roy Romanow, the premier of Saskatchewan at the time, never told his full cabinet about the secret committee’s work, Romanow told Chantal Hébert, author of The Morning After: The Quebec Referendum and the Day that Almost Was, to be published by Knopf Canada on Sept. 2. Maclean’s has obtained a copy of the book.

“Filed under the boring title of Constitutional Contingencies — a choice intended to discourage curiosity — [the Saskatchewan committee’s] work was funded off the books, outside the provincial Treasury Board process, the better to ensure its secrecy,” Hébert writes.

The committee considered a lot of possibilities for the chaotic period Romanow anticipated after a Yes vote — including Saskatchewan seceding from Canada; a Western union of Saskatchewan, Alberta and British Columbia; abandoning the Canadian dollar to use the U.S. greenback; and even annexation of Saskatchewan, and perhaps other provinces, to the United States. “In the eventuality of a Yes vote, clearly you need to examine all your options,” Romanow says in the book.

The revelation that Romanow had set a contingency committee to work is one of several surprises in the book by Hébert, a columnist for the Toronto Star and  L’actualité [you’d think I’d get that right on the first try – pw] and one of the country’s most prominent political commentators. She wrote The Morning After with assistance from Jean Lapierre, a former Liberal and Bloc Québécois MP and a leading Quebec pundit. The premise of the book is simple: they interviewed nearly 20 key or peripheral players in the 1995 referendum, from Jacques Parizeau to Jean Chrétien to Preston Manning and Frank McKenna, and asked them what they would have done if the Yes side had been declared the winner of the referendum. The resulting slim volume is the most complete account yet of the secret strategizing on both sides of that historic battle.

What the authors found was chaos. Neither the separatist Yes camp nor the federalist No coalition had any coherent plan for how to deal with a Yes, and at the highest echelons on both sides, leaders were working at cross purposes. Disarray in both the Yes and No camps would only have gotten worse after a numerical Yes victory.

This disarray is clearest in the Yes camp, whose leaders were Jacques Parizeau, the Parti Québécois premier who led the referendum effort; Lucien Bouchard, the Bloc Québécois leader who was promoted, partway through the campaign, as “chief negotiator” for a seceding Quebec and de facto lead campaigner, demoting Parizeau; and Mario Dumont, the short-lived Action Démocratique party’s only member in the National Assembly.

Parizeau was dead set on using the slimmest of Yes margins to take Quebec out of Canada. The other two partners spent the weeks before the referendum trying to figure out how to stop him.

Dumont tells Hébert and Lapierre that he and Bouchard “had had conversations about the fact that it could become necessary to stop Parizeau if he [tried to] simply break up from Canada on the basis of a 50-percent-plus-1 mandate and a unilateral declaration of independence.”

It’s not obvious what they could have done to stop him. Bouchard and Dumont had both signed an agreement on June 12, 1995 — an agreement mentioned in the referendum question — that explicitly gave Parizeau the right to declare sovereignty if he decided Quebec-Canada negotiations were stalemated.

And, Parizeau tells Hébert, he had plans to ensure the negotiations went the way he wanted, not the way the equivocating Bouchard hoped. Bouchard had a title — “chief negotiator” — but no mandate, either verbal or in writing, and on Oct. 30, 1995, the day of the referendum, he couldn’t even get Parizeau to return his calls. Parizeau, meanwhile, retained the right to appoint the entire rest of Quebec’s negotiating delegation. “It would have essentially been people whom I trusted completely,” he says. “I knew exactly which of them would be a good fit for the job.” Officials with a mandate to fly to foreign capitals to spread Parizeau’s version of events “already had their plane tickets” even as Quebecers were voting, Parizeau said.

Against Parizeau’s advantages — the title of premier, the letter of the law and an army of civil servants — Bouchard and Dumont had the hope that popular sentiment and personal connections would somehow break their way. “I wonder what the international community would have made of the news that two of the three leaders of the Yes camp did not interpret the result in the same way as Parizeau,” Dumont says. In one of several cases of apparently deep-seated wishful thinking among Hébert’s and Lapierre’s interview subjects, Dumont imagines a Yes victory would have led to a quick Quebec election that would have served his own party’s purposes nicely. “I would have won 10 seats instead of just my own.”

Related: An excerpt from Hebert’s book

Bouchard, as befits a chief negotiator with no mandate, no committee and nobody answering at the premier’s office, was left alone with his prodigious imagination. He tells Hébert and Lapierre he expected a Yes victory would lead to a second referendum at the insistence of Jean Chrétien’s federal government, and that he would have urged Parizeau to hold such a vote. He thinks a Yes would have led, not to secession but to “a deal” that would “certainly be better than what we have now.” He hoped the premiers of other provinces would be at the table because “I was friends with the premiers, really friends with all of them.”

The No side, meanwhile, was a comparable chorus of mutual incomprehension. Preston Manning, who as Reform Party leader had the third-largest caucus in the House of Commons in 1995, tells Hébert that if the Yes side had won a majority, “I expected [Jean Chrétien] to resign on that night or shortly thereafter.” If Chrétien had insisted he was still the prime minister, “You would have had Western members leave Parliament and not come back because it would have been considered illegitimate.”

In challenging Chrétien’s legitimacy as prime minister, Manning could perhaps have counted on a surprising ally: Brian Tobin, the Newfoundlander who was Chrétien’s fisheries minister. “You’re only the boss if you can say to the Governor General that I have at my back the majority of the House,” Tobin says in the book. “The notion that there would be a bunch of Quebecers negotiating with a bunch of Quebecers is false. It would never happen.”

Were Tobin and other Liberals planning to remove Chrétien as leader of a continuing Liberal government? Well, no. In fact it is hardly clear from the book what Tobin was thinking, if anything. “I don’t think he would have offered to quit or to leave and I don’t think caucus would have asked him to,” he tells Hébert, “but I think the caucus and the cabinet would very much have wanted to be engaged in what the strategy was on a go-forward basis.”

The last interview in the book is with Jean Chrétien, and like Parizeau he comes off as a man who had thought options through while others, including some on his own side, were relying on guesses. “I had a number of cards that I ended up not having to play,” he tells Hébert, but she has learned of a few. Frank McKenna, then the premier of New Brunswick, reveals that Chrétien had called him several days before the vote to ask if he would quit that job to serve in a “cabinet of national unity” after a Yes vote. McKenna told Chrétien he would.

This is significant to Hébert, who refrains from analysis for much of the book, letting her subjects tell their own story. But in the Chrétien chapter she points out that he was weighing possibilities and options for a Yes scenario in private with close associates, even in the early stages of a campaign when the No was far ahead in polls.

Manning planned to challenge Chrétien’s legitimacy, but Chrétien had done the math: the Liberals had three times as many seats outside Quebec as Reform did. As for Reform boycotting Parliament, “If the Reform had left the House, I would have had an easier time,” Chrétien says.

A reader leaves Hébert’s and Lapierre’s book with the overwhelming impression that with few exceptions — Parizeau, Manning, Chrétien, Romanow — politicians of every stripe managed to bring less thoughtfulness to a campaign over Canada’s fate than they do to many more mundane questions. It is a mug’s game to guess who would have won, in the inevitable confrontations between Parizeau and Bouchard, Chrétien and Manning. It’s not clear that anyone would have.