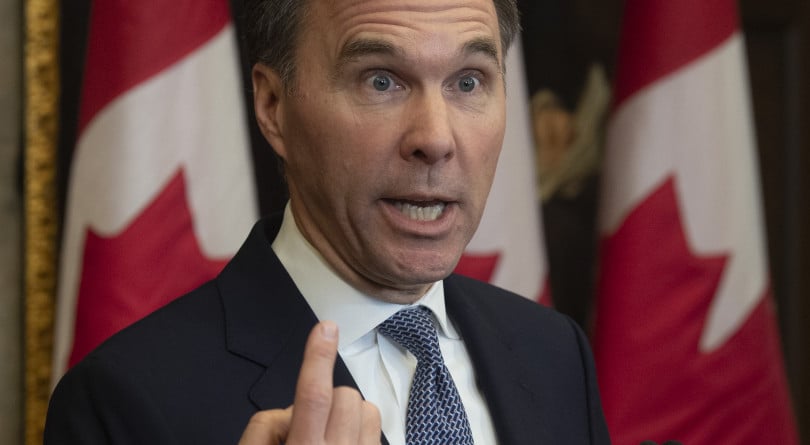 Slower growth. Bigger deficits: That was the message from Finance Minister Bill Morneau in the federal government’s fall economic update. For 2019-20 the deficit is expected to come in at $26.6 billion, topping the $19.8 billion that was projected in the 2019 federal budget by nearly $7 billion. The deficit forecast for 2020-21 was also ratcheted up to $28.1 billion, from $19.7 billion in the last budget. (A sizeable chunk of the difference is due to the effect lower-than-expected interest rates are having on Ottawa’s pension obligations.) Meanwhile Morneau said “fundamental structural shifts” in the global economy are shifting growth into an even lower gear. And Morneau said he’s open to the idea of plunging deeper into the red to sweeten the fiscal stabilization program for oil-rich provinces hit by slumping commodity prices.

Deficits are here to stay. But how sustainable is that?: The days of endless deficits are back, and with minority government pressures and economic trouble ahead, that’s a problem, writes John Geddes in this story from the latest print edition of Maclean’s:

Only a few years ago, the notion of running government deficits year after year with no plausible plan for balancing the books was widely seen as political poison in Canada. But the conventional wisdom among political strategists that Canadian voters demand fiscal discipline has crumbled over the past two federal elections, replaced by a shrugging acceptance of red ink. In 2020, though, with growing fears of an economic slowdown or even a recession, the question of what level of deficit really is sustainable could be put to the test. Read more ››

The Liberal government’s foreign policy cop out: At a historically critical moment, when the world really does need more Canada, it’s nowhere to be found, writes Adnan R. Khan:

Retreat should not be an option in a world where men like Donald Trump, Xi Jinping and Jair Bolsonaro are ascendant. Nor should waiting and hoping that these agents of self-interest will magically disappear and the world will go back to normal. Experts warn that is simply not going to happen. Canada should not be trying to save the world order as it was but helping to shape the world order as it will be when the dust finally does settle.

The Liberal government, like past governments, appears unwilling to take on that task.  If the Throne Speech was any indication, Canada’s role in the world will figure even less prominently than it has in the recent past. All the pretty words reinforced what has become the defining feature of the Liberal government on the world stage: It talks in the modernist voice about grand narratives—global peace and harmony, equality and justice—but fails to appreciate the postmodern reality of fragmentation and discord.

What we need is boldness. Canada’s foreign service is in shambles; it needs urgent reform and an infusion of funding. The Liberals may not have created the problem, but they have failed to address it and that failure has had consequences. Read more ››

They’re not not running: Add Conservative MP Pierre Poilievre to the list of people who haven’t explicitly ruled out a run for leadership of the party. Poilievre readily admits he doesn’t have “any campaign organization” but he sure sounded like a contender when he slammed the podium and declared “What I do know is that we need someone who will stand up, fight back, and win.” Poilievre joined Michael Chong, Erin O’Toole and Gérard Deltell in the “We’ll see” column. They may have to decide soon — Dan Nowlan, who headed the 2017 leadership race, said it is possible to carry out a leadership vote at the party’s April convention in Toronto, but “it will take a lot of work.”