What's actually standing in the way of right-wing populism in Canada?

John Geddes: The convoy chaos suggests Canadians are just as susceptible to Trump-like forces as Americans. Our real advantages lie in our political system. 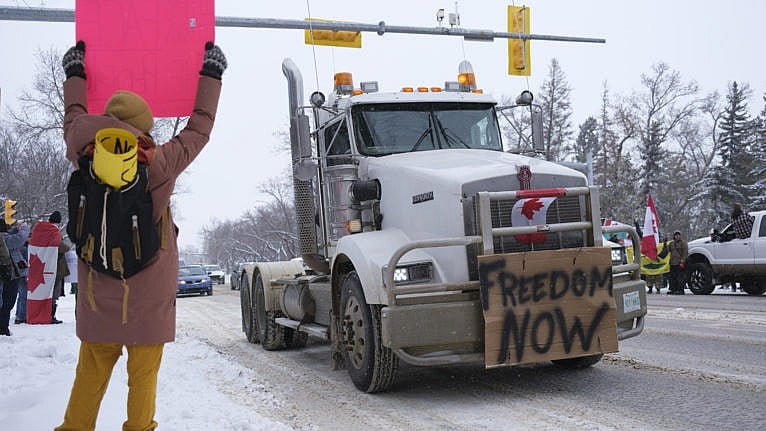 A rally opposing COVID restrictions, near the Legislative Building in Regina, on Feb. 5, 2022 (Michael Bell/CP)

It’s hard to cling to faith in the orderly temperament of Canadians with streets and bridges blockaded, diesel fumes hanging heavy in the winter air. No matter how the convoy chaos in Ottawa (and beyond) is ultimately resolved, this episode should spell an end to illusions about Canada’s supposedly peaceable culture and moderate character insulating our country from the scary side of right-wing populism.

In fact, the notion that there’s something in the Canadian disposition that makes us less susceptible than the Americans were to Donald Trump (or the Brits to Brexit, or the French to their far-right presidential contenders) has never been all that convincing.  Sure, a big majority of Canadians overall disapproved of Trump, but we should have taken heed when an Ekos Research poll at the outset of his dystopian presidency showed that 57 per cent of Conservative voters in Canada viewed him favourably.

And Canada has its share of the factors that strain social cohesion, including economic anxiety, nativist intolerance, regional resentments—all exacerbated by the nerve-fraying frustrations of the pandemic. Yet this doesn’t mean we should abandon hope that sensible, centrist politics might stand a better chance of prevailing here than in some other democracies. It’s just that we should trust less in the mysteries of Canadian identity, and more in the advantages of our political system, and key policies and practices that have flowed from it.

The first factor to keep in mind these days is the outsized clout of sparsely populated states in the U.S. Senate, and hence in Washington’s power dynamic. At the federal level, there’s nothing in Canada that parallels the way, say, Vermont elects two senators and so does New York, or Wyoming two and so does California. In Ottawa, the big provinces with the big cities wield legislative power at the federal level commensurate with their large, diverse populations.

But that shouldn’t be mistaken for meaning resentment of what Toronto and Ottawa symbolize across much of Canada is less virulent than antagonism toward what New York and Washington represent across vast swaths of the U.S. map. It’s just that our Parliament doesn’t lend the less populous regions nearly as much legislative leverage. Our system is different, not our psyche.

Or consider the way elections are run. In the U.S., local and state control over the voting process has led to the sort of wildly varying rulebooks that Trump and his allies tried to exploit to sow confusion after he lost the 2020 presidential vote. In the early years after Confederation, Canadian elections were also largely local affairs, and subject to confusion and corruption. That was largely fixed in 1885, when the national election processes we benefit from today were instituted.

Dirty politics, though, persisted. For example, gerrymandering was a long-running scandal in Canada up until a key 1964 reform finally took the key task of mapping of ridings out of the hands of party functionaries, and gave the job to upright independent commissions. In the U.S., constituency boundaries for seats in the House of Representatives remain notoriously subject to being redrawn to favour one party or the other. History shows that Canadians aren’t inherently more fair-minded. We owe our edge to far-sighted reformers who made the right change when the opportunity arose.

Canadians also shake their heads at the highly politicized—even polarized—nature of U.S. judicial appointments. No serious watcher of Canada’s courts, including the Supreme Court of Canada, pretends judges don’t bring their own ideologies to the bench. But the Canadian process for picking them remains far less tainted by partisanship than in the U.S., and that must be safeguarded to preserve what’s left of public faith in institutional authority.

This is another advantage Canadians shouldn’t take for granted. Sean Fine, the Globe and Mail’s veteran justice reporter, has flagged concerns about Ontario’s excellent appointment system becoming more exposed to the preferences of the party in power. As well, the Globe reported a few years ago on the federal Liberal government checking potential judges names through a party database. The eye-glazing details of selection processes will never generate sustained public concern, but we need journalists and independent experts to be vigilant and vocal.

This sort of Canads-U.S. compare-and-contrast exercise leads inevitably to an even more fraught issue. Is Canadian politics less twisted by racism? That question is too big for this piece, but I can point to research from academics like University of Toronto’s Phil Triadaﬁlopoulos, who have shown how Canada’s immigration policies, dating back to the reforms of the 1960s, offered an easier path to citizenship and fostered greater democratic participation among new Canadians.

Those engaged newcomers tend to concentrate in Toronto and Vancouver, often in suburbs where party election strategists know they must be competitive to have any hope of prevailing in national elections. In this way, immigration policy loops back to reinforce the way power in Parliament properly reflects population density and diversity. (And it helps that getting rid of gerrymandering meant nobody could redraw the electoral map to erase the ballot-box clout of any inconvenient voters.)

These and other ways Canada’s democracy looks healthier, compared with the U.S., don’t rest on some underlying Canadian sensibleness, some congenital propensity to moderation. In other words, there’s nothing in our national character we can count to make us less likely to gather for an unruly, unreasonable protest, issue blatantly undemocratic demands, and lay siege to the capital. There’s also nothing to stop certain duly elected politicians from actually praising such actions. It turns out Canada and the U.S. have this in common.

When the diesel fumes clear, there will be plenty of agonizing over misguided motivations and uncivil inclinations. Fair enough. But soul-searching is less important that recognizing the strongest elements in how our democracy works, and build on the parts that hold firm even when our sentimental sense of our national character is rudely shaken.