From House bills to gas bills: What’s a jobless politician to do?

MPs who failed to get re-elected face a daunting question: What comes next? 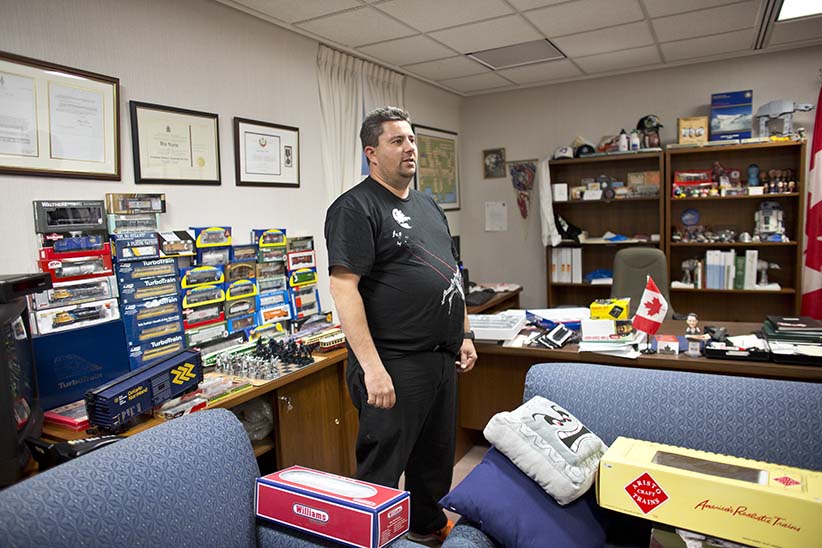 Dan Harris from the NDP, another casualty of the red wave that swept across the country this federal election, packs up his office in the Confederation Building in Ottawa on Oct. 23, 2015. (Photograph by David Kawai)

The elephant in Dan Harris’s living room is an obvious and uncomfortable question. It asks him, at 36, after living and breathing Parliament for four years as an MP and not getting re-elected: What, in the name of career and family, is he going to do with his life? It’s a question Harris can neither shoo away nor answer, so he zips it into his suitcase to take along on a trip. He’s going on a “repositioning cruise,” a discount vacation across the Atlantic with no sightseeing stops; a journey the boat must make between its regular coastline cruises. During Harris’s two weeks on the open sea with his partner, he’ll unpack the question and ponder his own repositioning. “I really don’t know where life will take me in the next few years,” he says. “I’ll be pretty happy if I come back and have my mind made up. The best part is that I’ll be thousands of kilometres away from cellphone towers.”

Like the 120 other unsuccessful incumbent candidates in the federal election, Harris, the former NDP MP for Scarborough Southwest in Toronto, must now draft his next chapter. The path often seems clearest for older veterans: Olivia Chow has returned to teaching community activism at Ryerson University, Megan Leslie has a background in law, and Peter Stoffer and other sixty-somethings have retired. Former MPs over age 55 receive pensions if they have served for at least six years, along with a severance pay of $83,700. Younger and less seasoned vets get severance but no pension. However, dozens of departing NDP members this time around, including Harris, will have most of their payouts clawed back after the party was found to have misspent parliamentary budgets after the 2011 election—an accusation the NDP refutes.

Regardless of party, younger vets face fuzzier futures than their seniors, with the time-workplace trajectory halting at T equals election night. Many will leave the federal scene entirely, as the Accountability Act, introduced by the Harper government in 2006, prohibits them from lobbying for five years. Laurin Liu, a 24-year-old former NDP MP in Quebec, is considering finishing her undergraduate degree in history, joining advocacy groups and starting a family. “There’s a lot of maybes,” she says. “I don’t think I’ll be idle for long, but I don’t have a lot of answers right now.” Mark Holland, a Liberal incumbent who lost in 2011 at age 36, like Harris, describes the uncertainty. “When you run, there’s no Plan B,” he says, “The next day, it’s surreal. You feel very discombobulated. It took me a couple weeks to leave the house. You wonder what will give you a similar sense of passion and excitement.” (Holland was re-elected this time around.)

Harris, in his Before Caucus Era, was a computer programmer who never finished his college degree. He worked, among other gigs, as a tech supporter in the oil sands, a self-employed web designer, and a call centre clerk who serviced funeral homes, U.S. consulates and toy stores. He dispatched hearses to transport bodies, handled “nuisance calls” from pretend CSIS agents, and rescued parents from tantrumming children whose electronic piggy banks didn’t work on Christmas Day. In his teens and early 20s, Harris worked at a daycare, where he enjoyed the kids, but not afternoon snack duty. “Preparing mango for a hundred children—I never want to do that again,” he says.

Leaving technology and tree fruit behind, Harris ran for city council in 2006. He campaigned indefatigably and lost three times federally and once municipally before winning federally in 2011. After a total of six elections, he’s now not sure whether he’ll stick with politics, but he’s equally unsure if he could return to IT. “It’s not just that my skills have atrophied. I’d have to relearn everything.”

Double-barrelling the question is the lifestyle choice. “Do I want to be tucked away in some corner office, programming computers? I’m not so sure,” he says. Moreover, the best-paying IT jobs may mean relocating to the North Sea, the Gulf of Texas or the Middle East. In Scarborough, where he was born and recently bought his own semi-detached house, he lives within five minutes of four generations of family. “It’d be hard to call anywhere else home,” he says. Other options exist. “Do I go back to school and work part-time, just to pay the bills? Do I start my business back up? I would hope not to go back to minimum-wage jobs. I don’t think I’d want to be the guy at the bottom of the totem poll, but you gotta eat. There are still bills to pay. I still have my mortgage, so I have to figure that out.” 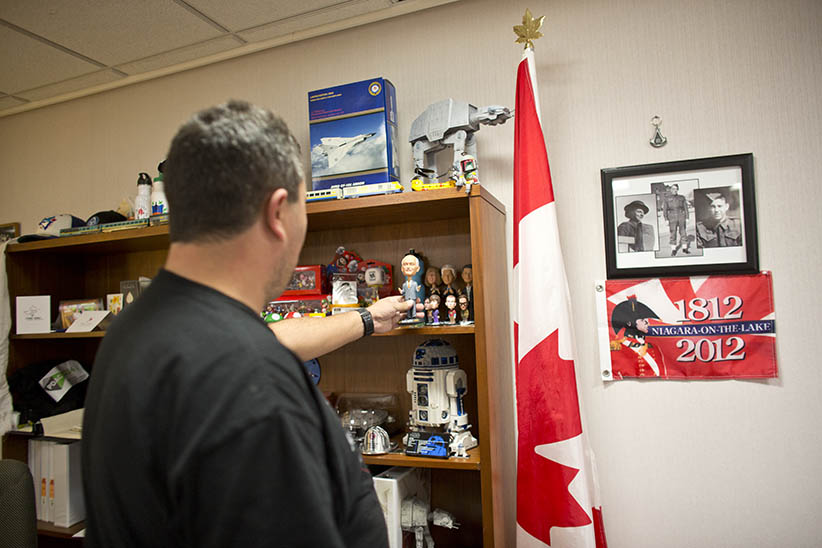 The “what next?” question is one to which exiting MPs have always given different answers. Among the incumbents who lost in 2011, Liberal Ken Dryden turned to teaching Canadian studies at McGill, while Michelle Simson, the Liberal MP whom Harris defeated, became a weekly radio commentator and hospice volunteer. “When you’re an MP, you become your job; it’s your essence,” she says. “It is devastating if you get fired from your job, but I feel I’m doing more worthwhile work than I ever did in the House of Commons.” Mark Holland was the executive director of the Heart and Stroke Foundation before reclaiming his seat in the recent election. He says the 2011 loss helps him to appreciate his current position in office and to balance his work with family and fun. (He has taken up improv.) “Losing is the best thing I’ve ever gone through, because it forced introspection,” he says. “You come back a stronger, more dynamic person.”

Harris’s questioning must wait for his nautical journey; before leaving, he has to drive to his former constituency office for Operation Office Clear-out. His burly body appears too large for his Toyota Sedan, and he seems to wear the vehicle Fred Flintstone-style. Yet he fits perfectly in his office, and he almost apologetically picks paintings off the wall, leaning them against each other. In the cobwebbed basement, he heads straight for a Rubbermaid bin labelled “Pride Stuff,” which is full of water guns that he tests out with a giggle. Squirt. He-he. Squirt. Oh, yay. And out of the basement they come.

Harris wants to have children. He and his partner (she wishes to remain anonymous) hope to raise as many kids as they can afford. “If it all works out, two or three,” predicts Harris. Child-rearing will be one perk of his post-parliamentary life, as MPs do not get parental leave.

The post-Parliament bittersweetness extends to other aspects of his personal life, as Harris now has time for his hobbies. “I’m a member of Canada Kicks Ass Gaming Clan,” he says, anticipating a new Star Wars first-person-shooter video game. “At least with things like MMOs (massively multiplayer online games), the universe doesn’t change that much, so I can pick up where I left off.” He is also spellbound by model trains and Lego. He once built a Star Wars battleship during a 24-hour voting marathon in the House of Commons, along with the 3,000-piece Imperial Star Destroyer in his Ottawa apartment, which he must also pack up on his way overseas. He has home renovation projects in mind, as well, and hopes to convert his backyard shed into an environmentally controlled workshop (for his train sets).

Harris’s first priority, however, will be to take care of himself. Under the pressure of politics, sometimes making three round trips to Ottawa in five days, he has landed in the hospital with stress-tension headaches. And amid the flying, he has developed a problem with his right eardrum, which, with every takeoff, pops painfully like a cherry tomato. “I finally have an MRI scheduled to see if there’s actually something wrong in there,” he says. Harris also now plans to quit smoking a pack a day. “Oh yeah, it’s time.”

After unloading office boxes into his house, Harris stands his suitcase up in his living room. He steps out to his driveway with a cigarette and an armpit full of mail and looks at himself in the Scarborough Mirror, his local newspaper, which features his exit speech. Staring at his photo and quotes, he cannot be sure what to do. He has the well-known face to continue as a politician, but also the re-trainable fingers to return to computer coding. He has the heftiness to keep warm, if he went to work in the North Sea, but also the stature to give epic fatherly shoulder rides if he stayed at home to raise kids.

He chucks the paper in the house in exchange for his suitcase and lifts it into his trunk. Packed mostly with T-shirts and smokes, the luggage would be light, but for the heavy question inside.

With files from Laura Payton