What's really up (and down) with incomes

Weeks after the whole sorry mess began, we’re still being treated to deep thinkers pronouncing upon the Occupy gatherings as if they meant something Deeply Significant. This piece in the Vancouver Sun is a classic of the genre: inequality soaring, incomes stagnating, etc etc. All of which would be terribly concerning if there were any factual basis for it.

I’ve tried to deal with this elsewhere in prose, but sometimes there’s just nothing like a graph. Here, then, courtesy of Statistics Canada, is that runaway trend towards a society divided into haves and have nots, the “growing gap” you’ve been hearing all about: 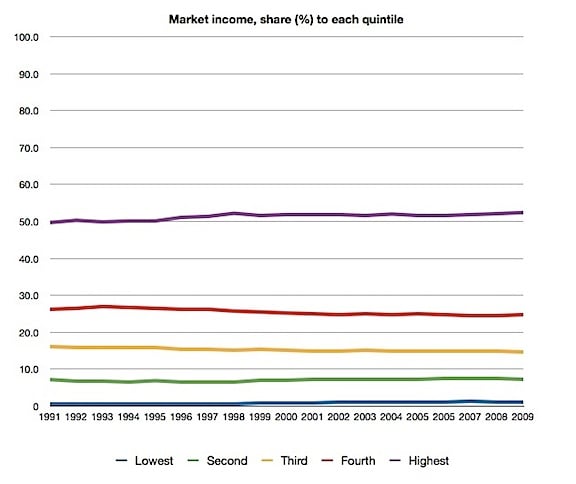 For those who’d like to check, the graph is from StatsCan’s CANSIM database. The numbers in HTML form are here (look under “All Family Units”), or you can have a look at my spreadsheet here.

Now, I’m cheating, of course. I’ve started the graph at 1991, a mere 20 years ago. Maybe widening income disparity is a more long-term phenomenon. Sure enough, if you pan back to 1976, which is where the CANSIM table I accessed begins, you see much greater gains for the rich. 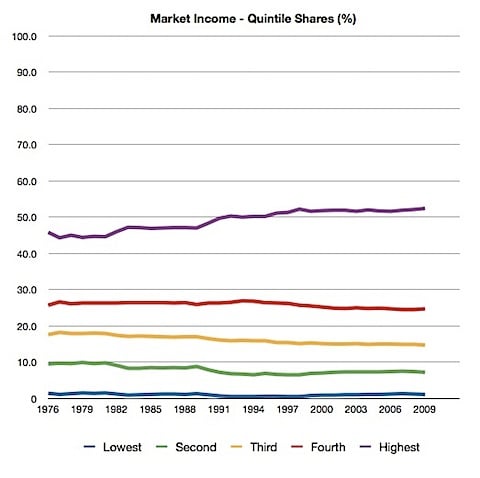 But that, surely, is the point. Most of the widening occurred decades ago: from 45% in the late 70s, the share going to the upper fifth rose to above 50% in the early-to-mid 1990s — and stayed there. So why all the caterwauling now, after nearly two decades of relative stability in income shares?

Why, especially, when the causes of the earlier widening are clear: the lingering effects of two brutal recessions. Have a look at the following graph. You can see two distinct phases. In the first, from the late 1970s to about 1993; the second, from 1993 onward. It’s in the first that all the widening occurred: not so much because the incomes of the rich rose, as because everyone else’s fell. They fell in two waves, corresponding to the recessions of the early 1980s and early 1990s, and the associated spikes in unemployment, to more than 11% each time.

It’s not hard to understand why: if lots of people are out of work, then lots of people are going to have little to no income to report. That drags down the bottom quintile in particular, but also other quintiles, so far as people earned no income for at least part of the year.

In between recessions, in the 1980s and again in the 1990s-2000s, incomes grew, in part reflecting a reversal of this trend: as people returned to work, the numbers reporting no or reduced income would have less and less effect on the average. Everyone’s incomes rise — but the incomes of the rich rise faster than everyone else’s. Much faster, it appears. So: growing gap, right? 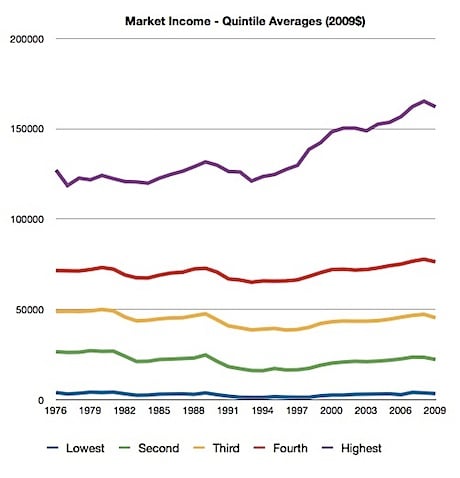 Not so fast. The chart above is deceiving, as it measures in dollar terms, rather than percentages. So higher incomes appear to grow much faster than everyone else’s, simply because they are dealing in higher dollar amounts. Index the numbers against a common starting point, and you get a better picture of whose incomes are growing faster or slower. 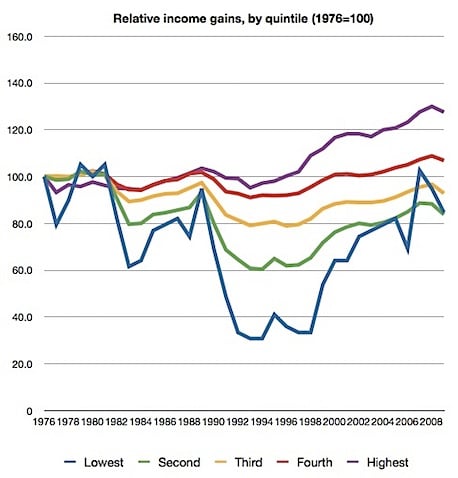 Again, you can see two distinct phases. In the first, everyone’s real incomes drop: the lower the income group, the faster — again, largely reflecting the influence of the two recessions. After 1993, everyone’s incomes rise — and the lower the income group, the faster. By 2007, just before the latest recession, average incomes in the lowest quintile, measured by the blue line, are nearly three times what they were in 1993. Average incomes in the next lowest, the green line, are up about 45% in the same time frame.

But the top quintile’s incomes do grow faster than some others: the middle (“third”) and second-from-the-top (“fourth”) quintiles. You can see that more clearly if we normalize the numbers using 1993 = 100. (I’ve left out the bottom group on this one, in order to be able to see more clearly how the top four quintiles move — the magnitude of the lowest group’s movements, down and up, so dwarf the rest as to make this necessary.) 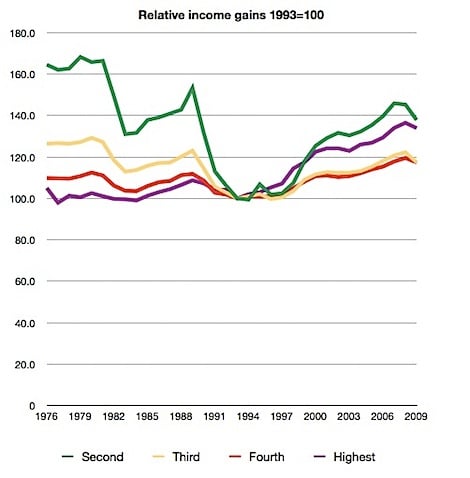 So the incomes of the top quintile grew faster since 1993 than some (the next two quintiles) and slower than others (the bottom two quintiles). And in the earlier phase, they were largely spared the effects of the recessions that ravaged incomes lower down the scale. That’s a lot more complicated story than “the rich get richer while the poor get poorer.”

All of the above graphs are for pre-tax, or “market” incomes. The picture is not hugely different if you look at incomes after taxes and transfers. The increase in the top quintile’s share is more muted, but also more of it occurs in the later phase. A possibly explanation: in the recessions, incomes lower down are buttressed by unemployment insurance and welfare. After 1993, these decline in importance; after 2000, moreover, tax cuts disproportionately benefit the upper fifth (since they pay most of the taxes.) 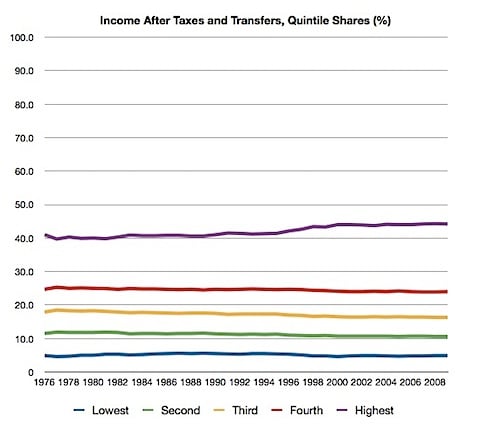 Finally, all of the charts above look at quintiles, based on family or household income. But what of the overall median? And what if we look at individual, rather than family income? Again, the picture is not hugely different: declining incomes during the recessions, rising otherwise. 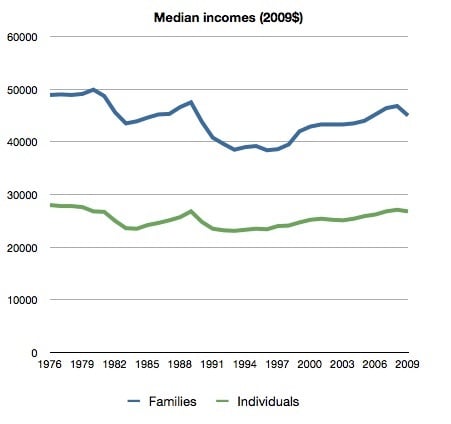 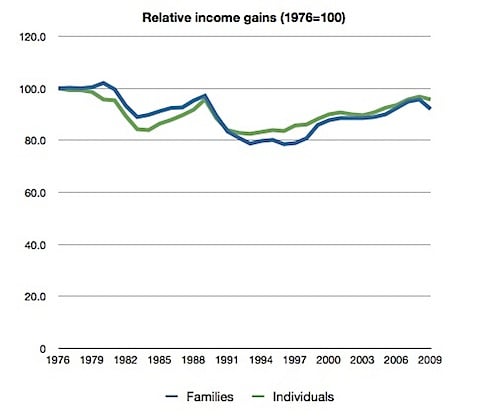 Still, it’s hardly an inspiring performance. Median incomes may have been growing for most of the last two decades, but they’re still below where they were in 1980. Yes: a couple of brutal recessions will do that to you. Unemployment spikes very rapidly, but subsides much more slowly. Answer: don’t have brutal recessions. Better answer: don’t allow the kind of accelerating inflation that leads to brutal recessions.

We forget how anomalous the experience of the 1970s to 1990s was. We didn’t have such nasty recessions in prior decades, because we never let inflation get so out of hand. We spent most of the 1980s recovering from the 1982 recession, and we spent most of the last two decades undoing the damage of the previous two. We were just about back to where we were when the financial crisis hit.

But still: we’re no further ahead than we were in 1980! And even the last two decades of growth didn’t produce that much rise in incomes. Take out the effects of declining unemployment, and real wages are only about 10% higher than they were in 1993. Two points need to be made about this.

One, real wages haven’t been rising very rapidly because productivity hasn’t. Our productivity growth is notoriously among the worst in the OECD. The reasons need not detain us here, but economics teaches us wages can’t exceed growth in productivity in the long run.

And two: the 1980 prosperity was an illusion. We were at the top of an inflationary business cycle: inflation was in double digits, and was headed higher if somebody didn’t put on the brakes. Deficits were on a similarly ruinous track. By contrast, the 2007 peak was characterized by low inflation and deficits: we may have had the same or slightly lower incomes than in 1980, but it was a much more sustainable track than before. Had the rest of the world not plunged us into a (mercifully brief) recession, that trend would be more apparent than it is now, but will reassert itself in time.

CODA: As I mentioned in my piece in the magazine, even the gains for the top 20% are almost all concentrated in the top 1%, or indeed the top 0.1%, or even 0.01%. The share going to the next 19.99% would look a lot like those of the other four fifths: more or less flat. You can find all the deets on that here.