When politicians refuse to conform to expectations

Surprises from Harper, Mulcair, Trudeau and May in our leaders debate 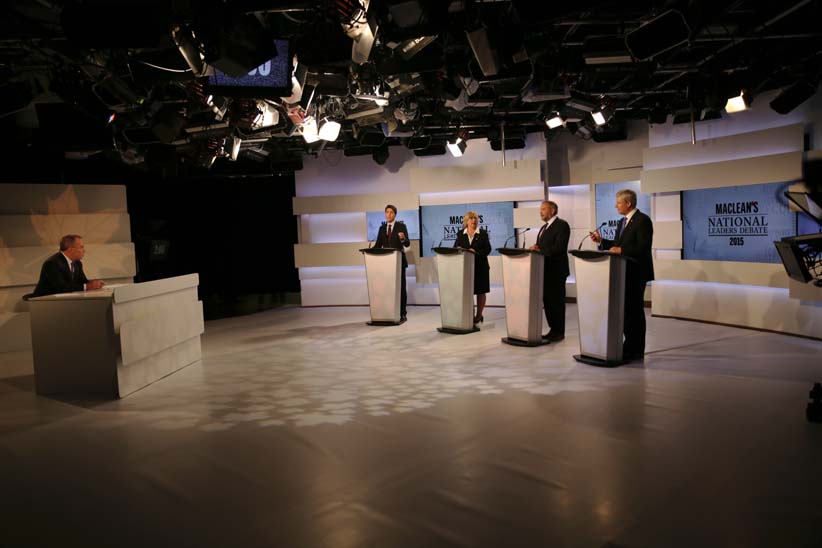 In the weeks and days leading up to last night’s Maclean’s National Leaders Debate, I had a lot of conversations with journalists, politicos of various stripes, and others who tend to watch these things with a level of interest that does not suggest a balanced approach to life.

There was a lively variety in their predictions, but a few points tended to be repeated. For sure, Prime Minister Stephen Harper would try to set himself above his rivals by refusing to look at them while engaging only with the moderator and the camera. No doubt NDP Leader Thomas Mulcair would spend the evening going for the kill. Likely Liberal Leader Justin Trudeau would play to his own strong suit—likeability—rather than trying (boxing photo-op notwithstanding) to slug it out with the harder-hitting Harper and Mulcair. Green Party Leader Elizabeth May would drone on.

None of that happened. Harper didn’t hesitate to face his opponents and mix it up with them. Mulcair only now and then seemed intent on inflicting damage, spending most of the evening striving to sound Prime-Ministerially poised. Trudeau was the most consistently combative of the bunch. May’s interventions were nicely framed and contained.

So the question coming out of this fascinating evening was: What happens when not a single one of four leaders co-operates by confirming expectations? Leadership politics are generally about establishing a narrative, creating a recognizable public persona, then making it work. Take the positive elements people already see in you and burnish them. Trying to make them appreciate you in some fresh and unfamiliar way is a far tougher challenge.

This is not to say any of the four leaders attempted a reckless U-turn last night from behind the podiums. Of course, Harper hasn’t always been aloof, Mulcair unfailingly pugilistic, Trudeau easygoing, or May loquacious. But, by suppressing those tendencies and accentuating contrasting qualities, they made simple summing-up of the debate’s impact impossible. It’s always easiest to highlight where politicians merely reminded us of what we thought we knew about them, positive or negative. All we need to do, then, is remember how voters have previously responded to similar performances.

Interpreting how unpredictable outings, such as last night’s, will play is much harder. A lot depends on how, or whether, the leaders now go out and build on what they did at the debate. For instance, if Harper really wants to show more willingness to connect, he’s got to venture outside his campaign bubble more; his decision not to answer reporters’ questions in Toronto after the debate didn’t send that signal.

But we had already seen clear indications well before debate day that Mulcair’s strategists don’t want him to keep coming across as prosecutor-in-chief. That’s an opposition leader’s job, not a prime minister’s. As for Trudeau, he needs to find a balance that can’t be easy to maintain: Can he remain so approachable while becoming more formidable? And May, finally, has, in one night, set herself a new, higher bar for rhetorical precision, which will be a challenge to clear day in, day out.

Last night’s event didn’t allow a response as straightforward as declaring winners and losers. But it’s far more intriguing to be left mulling how a set of surprises subtly shifts the tone of this marathon campaign at its very outset.