Where Jagmeet Singh is really coming from

Paul Wells: Canadians are getting used to hearing half answers from the NDP leader—on questions he himself is raising—about Sikh extremism 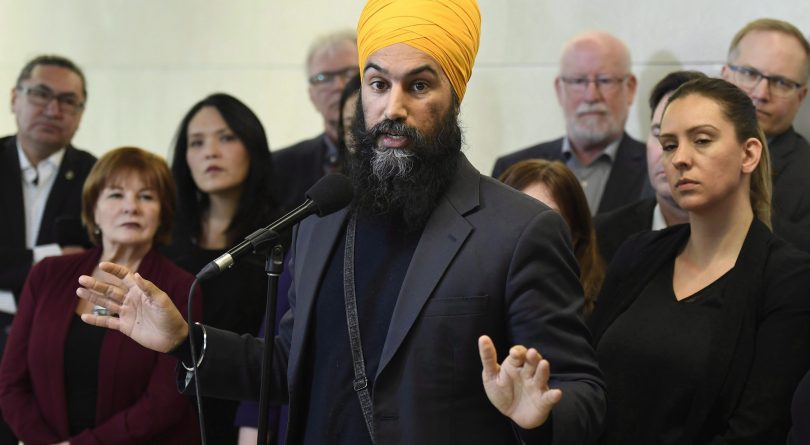 Here’s a funny Youtube video about Jagmeet Singh that came out during his first run for federal Parliament in 2011. It’s from JusReign, a YouTuber with a lot of subscribers who ended up working on Singh’s campaign. In the video, the two young men mostly goof around, wrestle, eat gulab jamun and goof some more.

At 2:30 Singh is giving his reasons for entering politics. He’s already mentioned student debt and other classic NDP issues. “I’ve also spoken out against members of the community who are attempting to slander the Sikh community,” Singh says.

Singh replies: “Well, you know, different people in the community will say comments…”

JusReign is incredulous. “In the community. In our community?”

“In our community, yeah.”

“Well, one in particular, there was some comments issued by Ujjal Dosanjh,” Singh says. This is an opportunity for more comedy from JusReign, who asks whether Singh wants to fight Dosanjh, and Singh protests that he wants no such thing, and that’s pretty much the end of the serious conversation.

What had Ujjal Dosanjh, the former BC premier and federal cabinet minister, been saying at around that time that Singh called an “attempt to slander the Sikh community?”

Well, the previous spring, Dosanjh had been warned that if he showed up at the Vaisakhi parade in Surrey, he should bring his own security because his safety couldn’t be assured. That led British Columbia’s premier to skip the parade, and Dosanjh to give this interview, in which he said Sikh extremism was “getting worse” in Canada, thanks to “politically correct” politicians who turn a blind eye in the name of diversity. This led to a Facebook page calling Dosanjh a traitor; one of the comments on the page was a pretty clear death threat, not the first Dosanjh has faced.

READ MORE: Indian spies did it, and other Ottawa conspiracy theories

So, Dosanjh criticizes violent extremism, is rewarded with concern trolling over his personal safety, and Jagmeet Singh says it’s Dosanjh’s perpetration of “slander” that helps to motivate his entry into politics.

These are complex issues and I’m not going to convince anyone if I start trying to designate heroes and villains. But it’s the darnedest thing: every time Jagmeet Singh shows up near the 34-year-old dispute over appropriate and inappropriate responses to the 1984 massacre of thousands of Sikhs in Delhi and Punjab, he seems to volunteer comments that are pretty easy to interpret as taking sides.

In 2011, he wanted to take on Dosanjh, a frequent recipient of death threats who was beaten with a lead pipe in 1985, for “slander.” In 2015, the Globe and Mail reports, he was in San Francisco speaking at a Sikh “sovereignty rally” featuring posters of Jarnail Singh Bhindranwale, who died in an Indian government raid against heavily-armed Sikhs in the Golden Temple in 1984.

Was Bhindranwale a violent extremist or a freedom fighter? I confess I’m agnostic on the question, though I know lots of others aren’t. But Singh’s presence at the rally, which was some 4,000 km from the riding he then represented in Ontario’s legislature, suggests a really keen interest. Steve Chase, the Globe’s reporter on this story, tweeted a photo of the rally. The biggest banner in sight says “SOVEREIGNTY RALLY” in letters as big as your head, and this cheery quotation from Bhindranwale: “Freedom from slavery is only achieved when a person starts to prefer death than living like a slave.”

At the rally, Singh said, “We are talking about [the Sikh massacre as a genocide] because, in our country where we live, that country intentionally tried to wipe us out.”

But after the Globe story appeared, the NDP posted a reply from Singh in which he says, “Questions regarding the future of India are not for me to decide. I am not a citizen of India or an Indian politician.” Well, hang on. In San Francisco he’s concerned about “our country where we live” while standing in front of a photo of a fighter for Khalistan under the word SOVEREIGNTY. In Ottawa, golly, who’s to say? Shrug emoji. (On the substance of the narrow question at hand, he is closer to the truth in Ottawa than he was in San Francisco: He was born in Scarborough, does not live in India, and in fact the last time he tried to visit the country in 2014, its government denied him a visa.)

We are getting used, when watching Jagmeet Singh on these issues, to seeing certain characteristic moves. One is what could be called the firm condemnation of… well, of someone. “I condemn all acts of terrorism in every part of the world, regardless of who the perpetrators are or who the victims are,” he says in Wednesday’s release. This rather starkly evades the question of whether he believes Bhindranwale was a terrorist. Maybe he doesn’t! It would be interesting to hear him out on the question. Instead he makes a categorical statement that clumsily hides another, obvious question.

Déjà vu. After the CBC’s Terry Milewski aggressively questioned Singh about his opinion of the 1985 bombing of Air India Flight 182, the NDP leader said “anyone held responsible needs to be denounced.” You know who was never held responsible? Talwinder Singh Parmar, who was found by a commission of inquiry into the massacre to be the ringleader of the attack—but who died before being convicted. Milewski’s question was about Parmar. The Globe’s questions are about Bhindranwale. Singh’s answers are at once so forceful and so opaque that you may not be entirely surprised to learn he’s a lawyer by trade.

Singh’s statement on the San Francisco rally closes with an ode to “a fundamental principle that is written into Article 1 of the UN Charter: respect for equal rights and self-determination.” This is his answer whenever he is asked his position on the Khalistan question of Sikh independence from India. As a handy bonus, it allows a Canadian federal NDP leader to suggest generous tolerance for the secessionist aspirations of many Quebecers. Good for the nationalist vote, don’t you know.

But by now we are getting used to half-answers from Singh. The jurisprudence around the UN Charter right of self-determination isn’t skimpy. It’s vast. And as Canada’s own Supreme Court wrote in the 1998 Secession Reference, “international law expects that the right to self-determination will be exercised by peoples within the framework of existing sovereign states and consistently with the maintenance of the territorial integrity of those states.” That means: if you’re citizens of a sovereign state, you can’t unilaterally set the terms of your departure from that state with your territory.

The international preference for stability and territorial integrity is so clear, in fact, that in 2017 we saw two well-organized attempts at secession that went absolutely nowhere: in Kurdistan and in Catalonia. Again, you’d think that somebody who talks a lot about the right of self-determination would know something about the jurisprudence and the case law. And indeed, I think he does, but he’s hoping his audience doesn’t.

I would so dearly prefer that these not be the subjects that follow Singh around that, when I recently sat down with him for an hour in front of CPAC’s cameras, we didn’t discuss them. But I’m not the one who flew to San Francisco and took the podium in front of a death-before-slavery poster the size of a barn door. Three years ago. The guy who did that is Jagmeet Singh, and everyone is starting to notice how he answers the questions he himself put so much energy into raising.