Who could possibly buy the Trans Mountain pipeline — and how soon?

Suitors would have to be big enough, and that leaves a scant few Canadian possibilities. 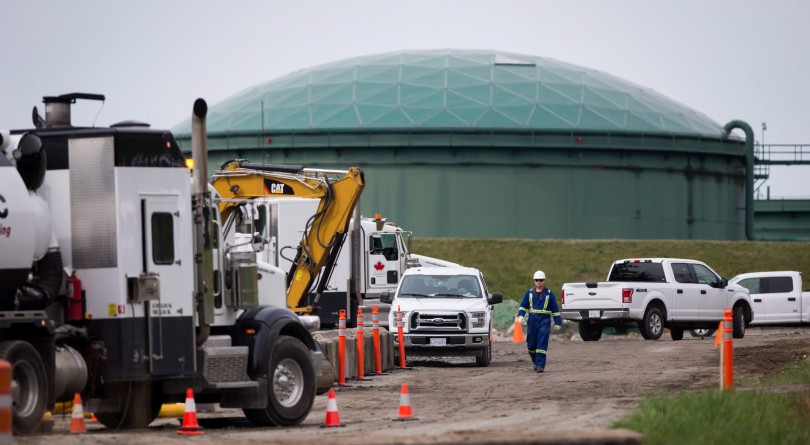 A worker walks past heavy equipment as work continues at Kinder Morgan's facility in preparation for the expansion of the Trans Mountain Pipeline, in Burnaby, B.C., on Monday April 9, 2018. THE CANADIAN PRESS/Darryl Dyck

The federal government is prepared to buy the Trans Mountain pipeline, but not to keep, you understand. Finance Minister Bill Morneau said he’s expecting “a short- or medium-term hold” on the project, before it’s flipped to a private buyer.

At his Tuesday press conference, Morneau said he doesn’t have a “target date” for a sale. But it’s unlikely the government wants to hang on through the entire construction process, which probably won’t conclude until 2021.

No firm or conglomerate would be willing to take on Trans Mountain in the absence of the kinds of concessions Kinder Morgan was seeking, says David Galison, director of research for pipelines, power and utilities at securities firm Canaccord Genuity. “There’s no reason why a company would take on that much risk — their investors would be up in arms.”

READ: Who will build the Trans Mountain pipeline—and at what cost?

Negotiations could evolve differently with a new buyer than those involving the original promoter. “Maybe [whoever] purchases it pays a little bit less [on] the price to account for the risk, on top of some levels of guarantees,” says Galison.

Possible players for a project of this size domestically are likely limited to two, Galison says: Enbridge and TransCanada. A recent Canadian Press story said the former “has denied it is negotiating to take over the Trans Mountain expansion project,” while the latter did not respond to a request for comment.

A foreign buyer may also be interested, although the Canadian government has so far declined to disclose if any discussions are underway.

Another possibility is a conglomerate consisting of say an institutional investor, a company in the energy sector and strategic partners. Galison notes that the Canada Pension Plan Investment Board (CPPIB) has formed joint ventures with Wolf Infrastructure and Enbridge to own midstream and offshore wind projects respectively. While there’s no obvious parallel involving a major pipeline, “if one of the parties can bring the construction expertise and the other the financial support to it, then there could be something,” he says.