Who gets to see themselves in our national anthem? 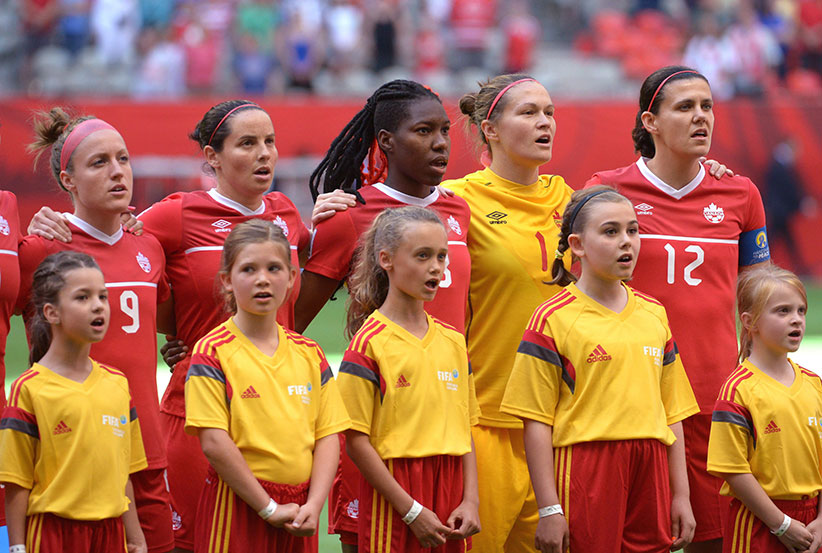 Kids sing the national anthem with members of team Canada before the first half of the FIFA Women’s World Cup round of 16 soccer action in Vancouver on Sunday, June 21, 2015. (Jonathan Hayward/CP)

From the patriotic cries of outrage, you’d think some secret cabal of politically correct liberal wizards were swapping the words of our national anthem with the lyrics to the Sex Pistols’ punk version of God Save the Queen. The fact is, all Mauril Bélanger’s private member’s bill seeks to change is the line “In all thy sons command” to “In all of us command.” It’s perfectly reasonable, given the fact that more than 50 per cent of the population are not, well, “sons.” The question shouldn’t be “Does it go too far?” It ought to be “While we’re at it, does it go far enough? Why not take the cross out of the French version as well?”

I’ll pause here to let the fumes of fury dissipate.

Tampering with symbols is sensitive work—after all, ideas move more slowly than emotions. We learned that lesson 52 years ago this week, when prime minister Lester Pearson introduced a resolution to change the national flag of Canada. That kicked off six torrid months of what came to be known as the Great Flag Debate.

John Diefenbaker thundered about loyalty to the sacred past, but Pearson faced him down, and instead of calling for a referendum, he struck a committee. Can you hear the little echo bouncing off today’s electoral reform debate? “Striking a Committee” might actually be the name of an advanced Liberal yoga pose. In any case, Diefenbaker countered with his own form of aesthetic political discipline—the filibuster—but failed. We got our new ﬂag. And our heritage didn’t dissolve.

Many of the same flag arguments Dief deployed are being recycled by the so-called anthem originalists. Erin O’Toole, the former Veterans Affairs minister, admitted to me that, yes, the anthem language is antiquated and out of date—I couldn’t get him to use the word sexist—but he argued the anthem as it stands should be a lesson in how far we have come. It strikes me that changing the words would do that far more effectively, but O’Toole believes the text of the anthem is almost sacred, and so should stand as is.

Words matter here, particularly in a debate about words, so tossing around the term “sacred” deserves a moment. Sacred can mean “venerated” or “connected to God,” a definition that veers perilously close to the kind of religiously infused nationalism our secular culture strives to avoid. At best, the anthem qualifies as a form of “civil religion,” a term developed by sociologist Robert Bellah in the 1960s to describe the set of common values and symbols in secular societies that connect us by mirroring religious dynamics. “Holidays” in the U.S., like Memorial Day, become “holy days.”

Even by that definition, sacred is not immutable. The English version of the anthem has a long history of change. While the original tune was composed in 1880 by Calixa Lavallée for a poem that is still the French anthem today, finding the right English words became something of a national hobby. Collier’s magazine held a competition, won by a woman named Mercy E. Powell McCulloch. “O Canada! In praise of thee we sing,” she wrote. It flopped.

New versions kicked around until finally—and here is where I just love our country of peace, order and good government—a lawyer named Robert Stanley Weir penned the final text. A lawyer. Bless us all and govern yourselves accordingly.

But even Weir was open to change. To honour the men going off to fight on the eve of the First World War, Weir changed his original line “Thou dost in us command” to the now controversial “In all thy sons command.” A noble sentiment, perhaps, but the fact is, the original version used the word “us,” which is exactly the word Bélanger wants to use again.

Today, of course, women fight for our country. I can’t help but think of Capt. Nichola Goddard, the first female member of Canada’s military killed in combat in Afghanistan in 2006. Shouldn’t the anthem recognize women who sacrifice their lives for our country, just as it was first changed to honour men?

The response to this question is often that somehow the word “sons” implicitly includes women. This is baffling. I don’t introduce my daughter and son as “these are my two sons” and hope people get it. Let’s not pretend that the past 112 years of repeated usage has changed a definition.

Conservatives who argue there is no burning desire to change the anthem wilfully forget that they floated the idea back in 2010.

Which brings us to the cross. This one has slipped under the radar, even though it remains in the original 1880 French version of the anthem. I recall as a grade-school kid singing the line “Il sait porter la croix” and wondering what that meant for a Jewish kid like me. My own children learned the anthem at a French immersion school. Why are kids in a secular country still singing about the cross? According to the last Stats Can household survey, more than 10 million Canadians don’t identify as Christian. Isn’t it time to take the cross out of the anthem and make us all feel a little more welcome?

Pause again for the “slippery slope” chorus, who complain we’re stripping Canada of our founding identity and ushering in the whitewashed era of politically correct blandness. What’s next: taking out God altogether?

Eventually, maybe we will—are we a secular society or are we not?—although at least the “God” in the anthem is not identified with a specific religion, so all Canadians who practise religion can feel included.

Anthem politics is emotional, but all of us, sons and daughters of all beliefs, ought to be included in something so glorious and free.