Who is Karina Gould, Trudeau's newest and youngest minister?

What you need to know about Karina Gould, the 29-year-old MP who is now the minister for democratic institutions 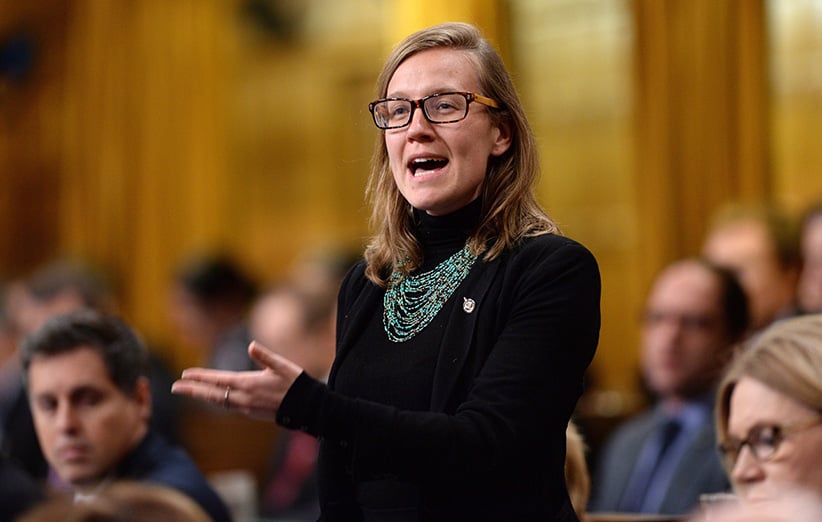 Liberal MP Karina Gould responds to a question during question period in the House of Commons on Parliament Hill in Ottawa on Tuesday, Feb. 16, 2016. (Sean Kilpatrick/CP)

There are two recurring themes that have rippled through the scant news coverage of the youngest minister in Justin Trudeau’s newly scrambled cabinet—which is three years younger, on average, than its previous incarnation. One is Karina Gould’s impressive education and work experience; the other is, well, how young the new minister of democratic institutions is.

The 29-year-old was elected in October 2015 to represent Burlington, a Conservative stronghold for most of the 35 years since the riding has existed. She earned 46 per cent of the vote to three-term Tory incumbent Mike Wallace’s 42.5 per cent. “I have been in public service for 23 years. Tonight, I was defeated by a 28-year-old,” Wallace said with a grin when he conceded the election results.

That said, Gould hasn’t exactly been high-profile since she was elected. She requires an introduction to observers who may have responded “Who?” to the news that she was replacing Maryam Monsef who, at 32, was the youngest member of the cabinet Trudeau named right after the election, and now becomes minister of status of women.

Gould grew up in Burlington, a relatively prosperous city of 175,000 just north of Hamilton. After she graduated from high school in 2005, she spent a year volunteering at an orphanage in Mexico, where—according to a local news profile—she learned to speak Spanish and met her husband, Alberto Gerones. She enrolled at McGill University when she returned to Canada, serving as president of the arts undergraduate students council and organizing a fundraising campaign that raised $20,000 for the 2010 earthquake in Haiti. She graduated with a joint degree in political science and Latin American studies.

From there, Gould moved to Washington in 2010 to work as a consultant in the Migration and Development Program at the Organization of American States, which was established in 1948 as an umbrella organization that now represents the 35 independent nations of the Americas.

Gould completed a master’s degree in international relations at the University of Oxford before moving back to Burlington, where she lived prior to the election while working as a trade and investment specialist with the Mexican Trade Commission in Toronto. She’s been described as a “community activist” with deep connections in her hometown. She has volunteered with the Iroquoia Bruce Trail Club, the Mississauga Furniture Bank—which provides donated household goods to families in need—and Halton Women’s Place, a shelter for abused women and their children. Gould’s federal defeat of Wallace came a little over a year after Liberal MPP Eleanor McMahon ended a decades-long long run of Conservative dominance at the provincial level, so it seemed Burlington was simply ready for a change.

During the 2015 campaign, Gould ignited a brief, minor controversy when a three-year-old tweet surfaced declaring, “It’s time to landlock Alberta’s tar sands,” and advocating against the Northern Gateway pipeline project. The tweet didn’t align with Trudeau’s position, and once it hit the campaign trail radar, Gould swiftly deleted it. (In November, the Liberal government ultimately rejected that pipeline, but approved the equally controversial Kinder Morgan expansion).

After she was elected, Gould was named parliamentary secretary to the minister of international development and La Francophonie. She rose in question period to handily defend what her government’s budget would do for ordinary Canadians, and the overhaul of the Canada Pension Plan. She even took a few swings defending Trudeau’s controversially laudatory remarks about the late Fidel Castro.

But arguably, Gould’s most high-profile moment as an MP was a brief blip that occurred during President Barack Obama’s July 2016 visit to Ottawa. In his address to the House of Commons, Obama saluted the “ties of friendship and family” that link his country and Canada. “In my case, an outstanding brother-in-law in Burlington,” Obama said. “I give Burlington a shout-out.” When Gould flashed a pleased grin and waved, Obama pointed at her, causing the news cameras to swivel toward her briefly.

But even if her brightest moment in the public spotlight so far arrived by accident in a President’s cheerful throwaway line, Gould’s intelligence and poise have clearly impressed enough to earn a promotion from Trudeau. She replaces Monsef, who is widely perceived to have failed to sell a vision for electoral reform and then made things worse by blaming the parliamentary committee that delivered on precisely the mandate she handed it. At the very least, Gould doesn’t have a tough act to follow.