Who lost China? And how was Canada supposed to win it?

Paul Wells: Some old hands think Canada should have tipped off China in the Huawei case. Their advice says a lot about what's changed in Ottawa. 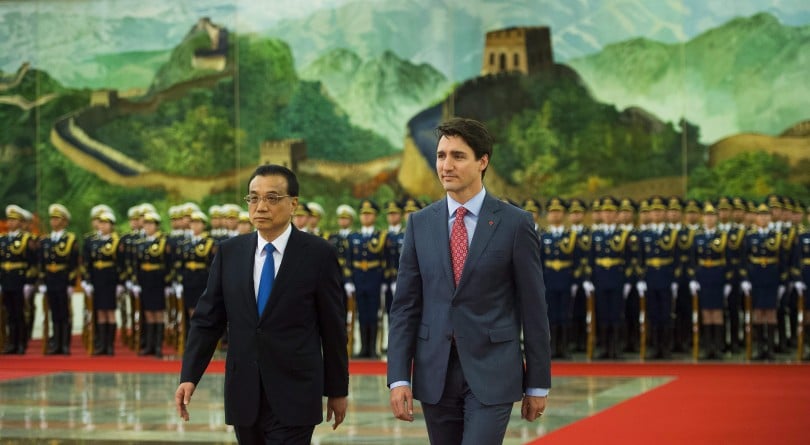 Prime Minister Justin Trudeau walks with Chinese Premier Li Keqiang during a welcoming ceremony at the Great Hall of the People in Beijing on Dec. 4, 2017. (Sean Kilpatrick/CP)

This op-ed by Gordon Ritchie, the legendary Canadian trade negotiator, is a doorway into a terrifying parallel dimension. It assumes a tone of great certainty about one of the modern world’s hardest questions—how should the rest of the world deal with China?—but its prescriptions are not as self-evidently wise as its author seems to think.

The headline is agreeably categoric: “Canada blunders and dithers its way to a failing grade on China relations.” Ritchie kicks off his argument by asserting that Canada has “clearly failed to make the grade” in “handling” China.

“The stage was set when the World Trade Organization admitted China as a member in 2001,” Ritchie writes. This let China “flood richer markets” with cheap stuff “while importing, borrowing or stealing technologies from more developed countries.” There’s concern that this “one-way bargain” is “unsustainable.”  This is true—if anything it understates China’s recent disruptive influence in the Asia-Pacific region and further afield—but it’s definitely bad enough.

“Enter the Justin Trudeau government,” Ritchie writes. Trudeau “mused” about a trade agreement with China, then “landed in Beijing ready to make a deal.” But the Chinese rejected Trudeau’s “progressive” trade agenda—gender, Indigenous, labour-union and environmental protections—so a deal was off.

This isn’t the crux of Ritchie’s argument, but already I have questions. If, as Ritchie writes a little later, “We should have shelved naive notions of a free-trade agreement with China” because it “is not and never was in the cards, at least on terms that were remotely acceptable to Canada,” where’s the harm in ascertaining Beijing’s terms and then dropping negotiations when those terms were found wanting?

I’ve criticized Trudeau’s trade trips before (at the bottom of this, for instance) but it’s actually not true that all he did before that Beijing trip was “muse.” Much of 2017 was given over to preliminary trade talks at the level of officials. I was told some time ago that they went nowhere: China wanted to hand Canada an off-the-rack deal, massively to China’s advantage, and the Canadian officials had no mandate to accept such a deal and no clout to improve it. So Trudeau went to Beijing to see whether he could get a better offer. An improvisation, to be sure. It didn’t work—it probably couldn’t have worked—but I don’t see the harm in trying. Indeed, if the Beijing cold shoulder has soured Trudeau on the whole prospect of a trade deal, it’s probably a good thing.

But Ritchie isn’t really mad about the trade talks. He’s mad about Huawei. Meng Wanzhou, a top-ranking executive at the telecomms giant, was passing through Vancouver, and the United States wanted her arrested and extradited. You know the story.

This inspires from Ritchie a sentiment that I would find astonishing if I hadn’t heard it already several times in recent weeks. “A competent government would have found a way, as former deputy prime minister John Manley has suggested, to discreetly warn Ms. Meng off.”

What Ritchie is suggesting is that Canada’s treaty obligations to its closest neighbour should be “discreetly” betrayed if keeping them would anger a sufficiently large third country. It would certainly have to be done discreetly. If word ever got out, it would confirm not only the Americans’ suspicion, but many others’, that a Canadian can be relied upon to provide all assistance short of help. It would, arguably, constitute obstruction of justice, and it would certainly endanger the career of any civil servant who passed along the discreet warning.

In fact, it’s fair to wonder who, specifically, would be expected to quietly inform a citizen of a quasi-belligerent country that she needed to skip town to avoid arrest. A diplomat? The RCMP? Would such an order be carried out by any public servant with any regard for his or her own honour, employability or freedom from incarceration?

What’s especially striking about Ritchie’s advice—just snitch, it simplifies everything—is that I’m hearing it a lot around town lately. Manley, Jean Chrétien’s former foreign minister, offered the same advice, as Ritchie points out. So, in informal conversations, have two very senior former staffers in Chrétien’s government. Both took Ritchie’s tone, which isn’t “Hear me out, I know this is a bit unorthodox,” but rather “What kind of a fool would honour an extradition treaty with our closest ally?”

I’m left wondering what sort of town Ottawa used to be, if so many of its old hands are sure that carrying out Canada’s treaty obligations constitutes “breathtaking ineptitude.” I’m tempted to say it was a town that was basically run by people friendly to Power Corporation for the purposes of safeguarding its business investments in China. And that leads me to offer a hypothesis to explain the foreign-policy differences between the Harper and Trudeau governments—yes, the two of them together—and their predecessors.

It’s that Chrétien and Stephen Harper, in quick succession, put successively lower caps on the amounts corporations could donate to political parties. These reforms sharply reduce the difference between the amount of clout you or I have in Ottawa, and the amount the member companies of the Business Council of Canada have. Both the Harper and post-Harper Conservatives and the Trudeau Liberals have had to adjust to getting by in a much more ground-level fundraising environment. A lot has been written about how this forces both parties to embrace crowd-pleasing populism. Perhaps not enough has been written about how it frees both from the go-along-to-get-along complacency that seems once to have been all the rage around here.

Taken together, Ritchie’s three bits of advice for the Trudeau government are: (1) don’t bother to negotiate a big free trade deal, but go for a bunch of smaller deals “to meet Chinese requirements,” yet another interesting turn of phrase; (2) skip out on treaty obligations when convenient; (3) on Huawei’s access to 5G networks, apply in Canada any decision made by Canada’s Five Eyes security allies for their own domestic markets. Note that points (2) and (3) are hard to reconcile: Are we supposed to blindly do what the Americans ask when it comes to Huawei, or not? The answer, apparently, is that we are to do so, except when we would be too conspicuous in doing so.

It’s surprising how often, when an old Ottawa hand accuses a sitting government of screwing up on a given file, the real complaint is that the government has failed to keep its head down far enough. It’s a big old world, the veterans say. Hide. Compromise. Is it naive of me to be glad we’re now more than a decade past the days when such instincts were seen as the height of wisdom?