Who wants to be Conservative leader?

Paul Wells: The Conservatives are fast heading toward a big question about what kind of party they want to be—and there's no easy answer 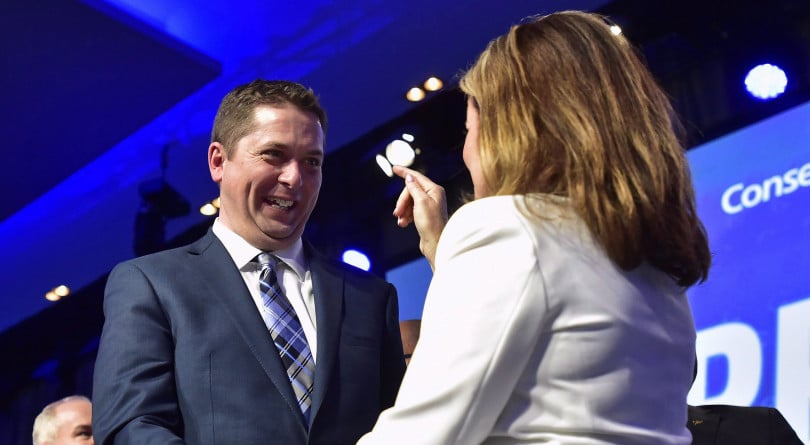 Scheer is congratulated by Rona Ambrose after being elected the new leader of the Conservative party on May 27, 2017 (Frank Gunn/CP)

Things will now start to happen quite quickly in the Conservative Party’s leadership campaign. Conservatives I talked to on Monday didn’t attach literal meaning to Lisa Raitt’s statement, on Friday, that potential candidates had only 10 days to make up their minds. (That figure would now be down to seven, if it were a real number.) But the winner will be announced on June 27, and as one person put it to me, when assorted Press Gallery members write the how-the-winner-won articles in June, we’ll all discover that the winner had a serious organization in place in January. Which is now. So, things will now start to happen quite quickly.

The race is, so far, substantially shaped by two people who aren’t currently in it: Rona Ambrose and Justin Trudeau. Ambrose, who shone as interim leader between Stephen Harper’s 2015 defeat and Andrew Scheer’s squeaker win in the 2017 leadership election, would be a presumptive favourite if she ran. If she’s preparing to throw her hat, presumably a white-brimmed Calgary Stetson, into the race she’s being good about message discipline: I’ve heard nothing to suggest she’ll trade her quiet private life for a return to politics. But neither has she said she won’t. So we wait.

Justin Trudeau raises the stakes on the whole exercise, because he spent 2019 demonstrating he’s not invincible. The assumption in 2017 was that Trudeau was a two-majority prime minister, if not more. In 2017, cutting the Liberals to a minority and picking up 26 seats would have sounded pretty good. Now that it’s happened, Conservatives are greedy. Which helps explain why Scheer was just hurried to the exits.

READ MORE: Conservatives after Scheer: the revolution eats its own

It also lengthens the odds against candidates like Erin O’Toole, Mike Chong, even Pierre Poilievre—MPs who’ve been around forever and seem kinda sorta like emergency replacement Andrew Scheers. O’Toole and Chong and probably even Poilievre would show up for a Pride parade and would be harder to attack than Scheer was on reproductive choice, though the Liberals will certainly do it anyway.  And if social conservatism were Scheer’s only weakness, that would be all his successor would need. But there is also a gravitas deficit, and even Conservatives who are kindly disposed toward O’Toole wonder whether he’s the kind of leader you pick if you expect to actually win the next election.

Who does have that kind of throw weight? Peter MacKay, in theory. Jean Charest. It’d be odd if they ran against each other—Charest recruited MacKay to run for the Progressive Conservatives when Charest was leader—but that was a long time ago. Conservatives who’ve talked to Charest say he sounds very likely to actually run. This amazes me. Some rock-ribbed Alberta Conservatives have essentially one criterion—that the next leader not come from Quebec—and many others wonder whether the post-Harper Conservative coalition, a mix of the old Reform and Progressive Conservative currents, could long survive with a leader who started as a Progressive Conservative and ended, last anyone checked, as a Liberal. Also one whose government has been the object of many, many police investigations. “Turns out Conservatives know a lot more about the Charbonneau Commission than I ever would have thought,” one of my sources said.

The Conservatives are heading very rapidly, then, toward a big question: what kind of party do they want to be? This is true along all the obvious axes—east/west, progressive/Reform, rural/urban, Pride attending/ not attending, carbon taxing/ not taxing—and maybe along a few that hadn’t come to mind yet: pleasant/jerk, for instance. I speak, of course, of Pierre Poilievre. Of course the Conservative finance critic makes Liberals furious, but he’s hardly universally popular among Conservatives either. That he is soft-spoken and thoughtful in private does him little good, since he’s just about only ever been a pit bull in public. He’ll be a formidable candidate if, as seems likely, he runs. And he may attempt a personality transplant, on the theory that his previous public persona was a carefully constructed artefact and can easily be swapped out for a new one.

Long story short: the Conservatives have no easy choices and no candidate guarantees success or even party unity. As some of us tried to remind them when they were busy making Scheer walk the plank. Guess it’s not helpful to remind them of that now. Still kind of satisfying, though.