Who will build the Trans Mountain pipeline—and at what cost?

Ottawa is set to take over the expansion project in August, with the clock ticking to find a buyer before construction ends, perhaps in 2021 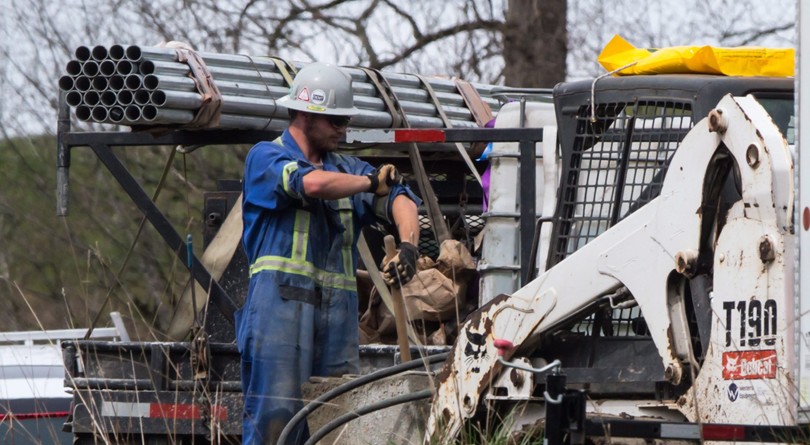 A worker rolls up his sleeves as work continues at Kinder Morgan's facility in preparation for the expansion of the Trans Mountain Pipeline, in Burnaby, B.C., on Monday April 9, 2018. (THE CANADIAN PRESS/Darryl Dyck)

Finance Minister Bill Morneau announced that the federal government has negotiated a $4.5 billion price to buy the Trans Mountain pipeline—which runs from Edmonton to Burnaby, B.C., just up the coast from Vancouver—but he repeatedly refused to say how much it would cost to complete the controversial twinning of the existing pipeline.

Senior officials in Morneau’s department told reporters it would weaken Ottawa’s negotiating position with possible private-sector buyers for the pipeline if they revealed their estimate of construction costs now. However, late last year, Kinder Morgan estimated the cost at about $7.4 billion, of which the company has already spent roughly $1 billion.

The plan for building the pipeline calls for Kinder Morgan to resume construction immediately, with the borrowing the company must do to cover costs now backstopped by an Export Development Canada loan guarantee.

There is a long-shot chance that a private-sector buyer might emerge between now and the deadline of July 22, set by Houston-based Kinder Morgan, in which case that new owner would take over construction.

READ: Who could possibly buy the Trans Mountain pipeline — and how soon?

More likely, the federal offer stands, and Canadians take over the existing Trans Mountain pipeline, its Burnaby terminal, the expansion project and the core management team overseeing the operation. At that point, the project would continue under the ownership of a federal Crown corporation.

Morneau’s officials argue this would be a significant advantage, since B.C.’s NDP government wouldn’t be able to regulate against a Crown project.

A plausible scenario is that the federal government takes over Trans Mountain in August, and construction carries on, but a private-sector buyer is found before the project is completed in perhaps 2021. In that case, Morneau says any buyer would be covered by a “federal indemnity” that would protect it against any financial loss caused by “politically motivated, unnecessary delays.”

That’s the same deal Ottawa offered Kinder Morgan earlier this month—but that failed to convince the company to stick with Trans Mountain.